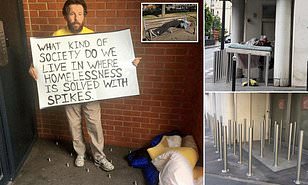 In urban centers across America, “hostile architecture” can be found on almost every city block. Whether it presents itself subtly, in the form of bolts on railways or seat dividers on public benches, or more crudely, via spikes on benches or sharply slanted benches to prevent sustained rest, the architecture meant to get the public to use public spaces in only one way. Many think the arm rests afford much desired personal space in the crowded urban environment. The reality, however, is that the architecture is designed to make homelessness even more difficult. Families at parks can still sit together in the presence of seat dividers. However, for homeless populations, those seat dividers keep many from sleeping on the benches.

This new trend in urban architecture sends a very clear message to those seeking rest and shelter: you’re not welcome here. The designs seek to exclude people who are struggling with homlessness by implying that they are not a part of our communities, making it acceptable to exclude them from public spaces. This attempt to eliminate the sight of poverty in public places has deeply wounded our homeless populations and remains incredibly inhumane. Rather than help our community members seeking shelter during the cold winter months and the blistering summer heat, architects have decided to create even more barriers for people experiencing homelessness.

Not only is this design cruel and unethical, it is also ineffective. The architecture only seeks to deter, rather than addressing the root causes of homelessness. The architecture doesn’t reduce homelessness, but instead forces people to move to different areas of the city that lack the abrasive measures taken against homelessness. Clearly, there is a larger problem that is going ignored in our communities and in urban spaces across the country. In many urban cities, there is a major lack of resources for people experiencing homelessness. At one San Francisco shelter alone, Coalition for Homelessness Executive Director Jennifer Friedenbach reports, there are 1,200 people on the waitlist just for one night. The lack of resources leaves thousands on the streets with nowhere to go, which is made increasingly difficult with the rise of anti-homeless architecture.

In Iowa City, a city with only 75,000 residents, the cost for replacing benches to conform with the new hostile architecture standards throughout the city was upwards of $150,000. That’s just for benches—the estimate doesn’t even include the spikes outside store fronts, bolts on ramps, or other examples of anti-homeless architecture that many other urban areas install. The city funds used to create barriers for people experiencing homelessness could very easily be funnelled into existing shelters to provide more adequate care and assistance to help move people into permanent housing. The funds could be used to expand shelters or create new ones so more people have options of sleeping indoors. All of these options would be much more helpful to people experiencing homlessness than simply excluding them from public spaces.

Assisting people experiencing homlessness doesn’t stop at quitting hostile architecture, but it’s a start. Redirecting the funds from these anti-homeless projects to homeless shelters in need is a crucial step.