I don’t remember when my name became an invitation to compare me to a puppet terrorist, but perhaps that’s because it still feels like yesterday.

Ziad Ahmed
and
February 23, 2020
in
Religion
Courtesy of Twitter 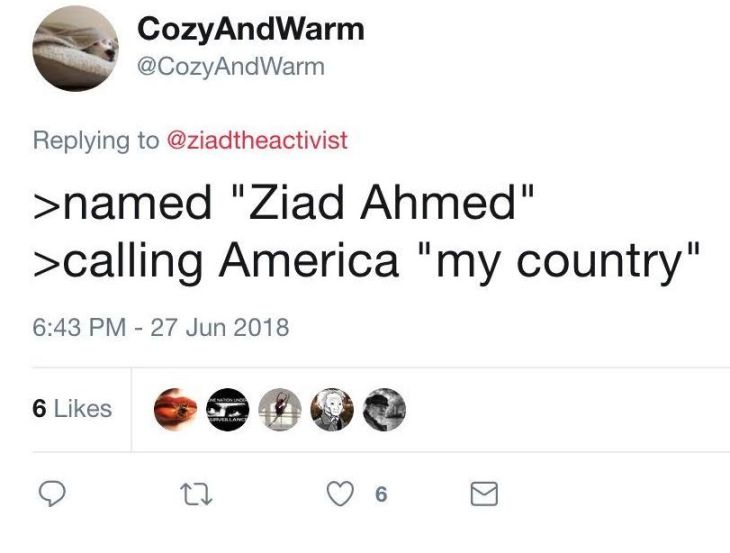 I don’t remember when my name became an invitation to compare me to a puppet terrorist, but perhaps that’s because it still feels like yesterday. My name is Ziad Ahmed, and I’m unapologetically American-Muslim. Growing up, though, introducing myself would often be met with “Ahmed? Like Achmed the Dead Terrorist?” I had never seen the video that they were referencing, but that didn’t change the fact that a comedian’s distasteful attempt at social commentary began to shape my coming of age. In 2009, Jeff Dunham’s “Achmed the Dead Terrorist” was the ninth most-watched video of all time on YouTube. In 2009, I was ten.

Ten years later, I still haven’t watched the video and the comparisons to the caricature of dead terrorists have since subsided; however, that same toxic internet culture, rampant with explicit and implicit anti-Muslim bigotry, has gone nowhere.

As a now twenty-year-old American-Muslim that is characteristically outspoken, I’ve almost accepted online hatred as normal because it is seemingly so inescapable. It feels as if my last name is a magnet for death threats, bigoted trolling, and inane callousness. As a coping mechanism, I typically brush off the vitriol as irrelevant, as failed attempts at humor, but there’s always a part of me that wonders if they mean it. As a teenager, I’ve had to reconcile speaking my truth with worrying those who care about me, and I’ve come to silently wonder if maybe these messages aren’t just threats. I tweeted on December 10th of 2018 in response to a death threatthat, “when you support Islamophobic candidates, normalize Islamophobia, and buy into Islamophobic myths, that has consequences. It looks like death threats towards American-Muslim kids like me, and it looks like real violence against many people. Islamophobia kills, remember that.” I wish the world had listened.

I’m still struggling to process the horrific shootings of mosques in Christchurch that have left 50 dead at the hands of a white supremacist shooter, and, like many Muslims, I’m wondering if it will be my community next. As I mourn the lives lost, as I find my hands shaking in anger for the people affected, I can’t help but think that YouTube videos, the comments section, and the normalization of white supremacy aren’t just unfortunate, aren’t just hurtful, but are actively deadly.

I give a lot of speeches about how Generation Z is the generation of memes and movements, but this heartbreaking attack in New Zealand exposes the insidious side to that reality. The shooter named exactly what radicalized him to be a violent racist — he named YouTubers, meme groups, far-right icons, and an internet culture that has perpetuated Islamophobia as mainstream for as long as I can remember.

I like to think that being of a generation of memes and movements is a beautiful truth that young people are using to shape incredible mobilizations like Friday’s #ClimateStrike, but it has also created a medium for white nationalist movements to dehumanize identities. This is a hard pill for me to swallow because I fundamentally believe that social media has the capacity to inspire so much positive change, but in its ability to cultivate community, the internet has spawned hate groups empowered by the same tools that can be used for good.

The thing about memes, hashtags, or videos though — they are only as powerful as we allow them to be. We get to decide what is trending by using our voices, passing the mic, and amplifying perspectives. As I sat shaken in response to the New Zealand shooting, I took to Twitter.

I write this now to say to my peers in absolute terms: your memes made in a sad attempt to rebel against political correctness aren’t funny — and your internet behavior has real consequences. As young people, we are shaping a digital sphere that can be a vehicle for progressive change as well dangerous radicalization.

I’m tremendously grateful to those using platforms responsibly, to those like Yara Shahidi and Sophia Bush who have shared my words to inspire others to be active allies. I’m disappointed though in how many are still silent. Your spring break pictures are not more important than the 50 lives lost, regardless of whether or not you identify as “political.” Hasan Minhaj made waves on the internet for declaring “you don't have to be Muslim to be heartbroken.” He is right, and you also don’t need to identify as an “activist” to speak up in response to a devastating atrocity.

We live in a world that so often glosses over the loss of Muslim lives as if we don’t matter. I saw the internet react to these tragic shootings, but it didn’t leave me feeling tingly with hope. In fact, it made me feel sick to see people send their thoughts and prayers for the lives lost while still following, and even defending, the same folks who the shooter named as his inspiration. The internet was ablaze, but the flames were rich with hypocrisy. It made me so angry to see those who peddle in the Islamophobia that radicalizes racists feign solidarity.

Far too many continue to follow Donald Trump (who has stated that “Islam hates us”), Candace Owens (who has supported the ethnic cleansing of Muslims in France), and Ben Shapiro (who has said that the majority of Muslims are “radical”) as heroes crusading against political correctness, championing truth, and bringing a refreshing perspective to politics. Well, allow me to be frank then considering the popularity of candor: if you want to begin to honor the lives lost, unfollow them. All of them.

This isn’t complicated. From “Achmed The Dead Terrorist” to dangerous far-right voices, the internet has been used a vehicle to mainstream Islamophobia. The memes aren’t funny, the normalization isn’t cute, and apologist attitudes are part of the problem. If you want to show up in response to this horrific tragedy, you need to build an internet culture in which white supremacist don’t feel emboldened to broadcast their violent racism. You know the Reddit threads, the meme pages, and the conservative “leaders” who paint Muslims as dangerous, as “foreign,” or as jokes. You know exactly what I mean I say that, to many, racism has become trendy.

I’ve seen Twitter headers with the “I” in Islam portrayed as the twin towers, endless memes of Prophet Muhammad (may peace be upon him), and prevailing rhetoric that paints Islam as a frightening enemy.

It shouldn’t be popular to be bigoted, and I believe we can work to deconstruct that by being thoughtful about who we follow, what we share, and what we speak up about. I plead through a tweet in December for the world to remember the fatal consequences of Islamophobia, and I write this now in the hopes that people really listen this time. There is beauty to thoughts and prayers, but there are results to action and advocacy.

When you scroll past news of 50 Muslims being murdered because you don’t feel like “dealing with it,” when you unfollow accounts because you are uncomfortable by their advocacy, when you follow accounts that spread dangerous misinformation, when you fail to acknowledge the consequences of hatred, when you believe your memes are more valuable than lives lost, and when you care more about the aesthetic of your feed than speaking up for what is wrong — there are real consequences.

How we use the internet matters; it can literally save lives.