"You Are Capable and Your Voice Needs to be Heard:" an Interview with Nadya Okamoto 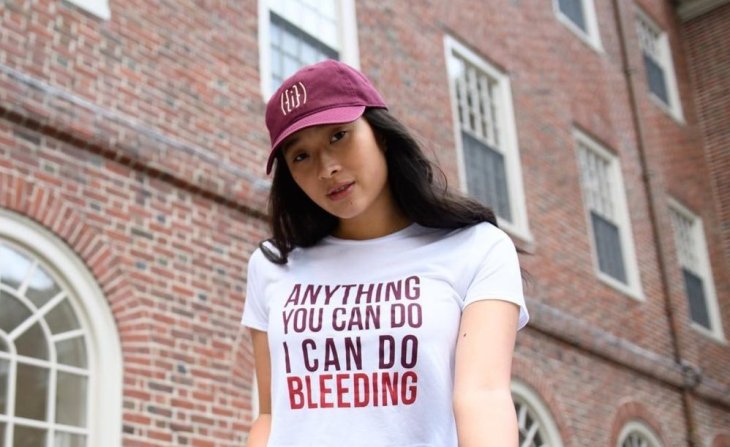 Nadya Okamoto, the founder of PERIOD, author of Period Power, and Chief Branding Officer of JUV Consulting, seems to be not only the epitome of success but also of generosity. From facing housing instability to attending Harvard, Okamoto has worked hard to overcome the numerous obstacles placed in front of her and through her success, has continued to inspire others to find their own paths and empower the voices of youth and of women globally. I had the recent privilege of interviewing Nadya on her experiences growing up, her new book, and her work at large.

Was there any one event that really set off the need to help women who didn’t have access to basic necessities for their periods?

When I was in high school, my family went through a period of housing instability. This gave me the opportunity to meet women in much worse living situations than I was in and gave me a new understanding of housing instability which grew my empathy for those experiencing homelessness. During this period of housing instability, I would commute to school on the public bus. This gave me the opportunity to meet and speak with homeless women in much worse living situations than my own. In our conversations, I collected an anthology of stories about using toilet paper, socks, brown-paper grocery bags, cardboard, and more, to take care of something so natural. I was inspired by the stories that I heard and learned more about the issue of menstrual inequities. These stories are what fueled my drive to start the organization now called PERIOD. The Menstrual Movement collected their stories and struggles, and when my family was back on its feet, I took action. Hearing the stories of these women who were in far worse living situations than I was in pushed me to realize that even in times when my family was facing adversity, I was still extremely blessed. I never had to worry about access to period products; I had my family around me, and I was still in school.

Your book, Period Power: A Manifesto for the Menstrual Movement came out this October. Writing a book is a pretty major and daunting task; how did you even get started and why was it so important for you to write it?

I wanted to write a book to show that this movement was REAL and has a larger vision for social and systemic change—we have an agenda and real facts and thoughts behind why we’re doing this. I started by googling “how to publish a book.”

How would you say identifying as a woman of color has shaped your leadership?

Understanding how women and people of color have been held back in achieving their full potential in positions of leadership and power has definitely influenced me by amplifying my motivation to empower myself and other young women of color in our Menstrual Movement network. When I started my activism, I didn’t see a lot of other Asian American activists or influencers and, knowing how valuable it is to have representation for all, I pushed myself to work harder to create a space for a whole girl gang of young women of color. I grew up with my mom always telling me that a true leader is one who empowers others to be leaders themselves, and I carry that with me every day—I am not doing my job well if I’m not creating opportunities and spaces for others to take leadership and create their own powerful voice.

How did you get the Period Movement to expand from more than just an idea? And did anyone help you along the way or inspire your actions?

My original goal for PERIOD was to have some sort of mobile service that distributed menstrual hygiene products to people who might need them. “Camion” is another word for truck or caravan. Even in 2014, people and mainstream media were still just getting used to a more open conversation about menstruation and period products. So, calling the organization “PERIOD” even a few years ago felt like a bit of a stretch, and I knew that we would get even face more doors closed in our faces. Calling our organization “Camions of Care” was a subtle way of bringing society into talking with us before starting to discuss periods in a bolder manner. Over time, things just started to fall into place and as we grew so did our mission.

I talk about this a bit in my book. Something that a huge impact on me was participating in a program called ANNpower (now HERlead)—it was the first time that I met mentors who encouraged me to believe in my potential to make a difference in my community (besides my mom), and the first time I met other peers who were starting their own initiatives to better their communities, as well. A HUGE support network for me in growing PERIOD has been our Board of Directors—a group of trusted family friends and advisors who have been integral in mentoring me to be a better nonprofit executive and to scale the organization strategically.

What would you want to say to young girls who are embarrassed or ashamed of their period?

Your period is a completely normal and natural part of life. It is nothing to be ashamed of or grossed out by. Half of the population on earth experiences menstruation for an average 40-50 years of their lives. Nobody should ever make you feel like you are less important, powerful, or capable in any way because you have a period.

What has it been like to juggle running an organization and being a student and what advice do you have for others trying to do the same?

It is very important to manage your time—and I don’t just mean balancing school and work. You have to carve out time for self-care as well. Managing your mental health is just as important as managing school and work or whatever else you are doing. It is as simple as making sure you get enough sleep each night.

At the same time, you also have to make big decisions about what your priorities are! I’m currently on a leave of absence from Harvard right now (for one year), to focus on publishing PERIOD POWER as my debut book into the real world, to grow PERIOD, and also to support the growth of JUV Consulting.

You do a lot of work around Generation Z and youth advocacy, and you are now Chief Brand Officer of JUV Consulting—a firm revolving around empowering youth voices. Why do you think the voices of young people are so powerful?

Young people represent the future and are more powerful now than ever. We are making decisions with our actions, voices, and money that have very real impacts on the world around us. This is something that companies must adapt to and learn from in order to survive today’s market.

How has the political climate of the #MeToo Movement impacted Period and your work at large?

It is amazing that women have started to come forward and speak openly about their experiences, and it has been absolutely empowering to watch as a survivor myself. The Menstrual Movement is about more than just periods—it is a vital step in the journey towards true gender equality. Access to menstrual hygiene management is integral in supporting menstruators all around the globe. Ending period stigma and the taboo surrounding so many other things considered “women’s issues” is an integral step towards achieving overall gender equality together.

What was it like running for office? Is there any hate that you receive for your campaign, and if so, how do you respond to it?

Running for office was one of the most terrifying, exhausting, yet meaningful experiences of my life. There was a lot of pushback—both locally and nationally, and the hardest part was the hate we received from peers on Harvard campus. However, what got me through it all was to ignore most of it and be thankful for the incredible campaign team I had composed of friends who inspire me.

And finally, what advice do you have for teenagers who are looking to speak out and stand up for an issue they’re passionate about, looking to change their community and society for the better?

Just go for it! No matter what it is you want to do, you are capable and your voice needs to be heard. If you want to do something, take action!

Responses have been edited for clarity