Yet Another Western Drought

This is the second consecutive year that California has attained the lowest water levels in its history.

Tanusha Paine
and
September 12, 2021
in
Environment
Courtesy of the New York Times 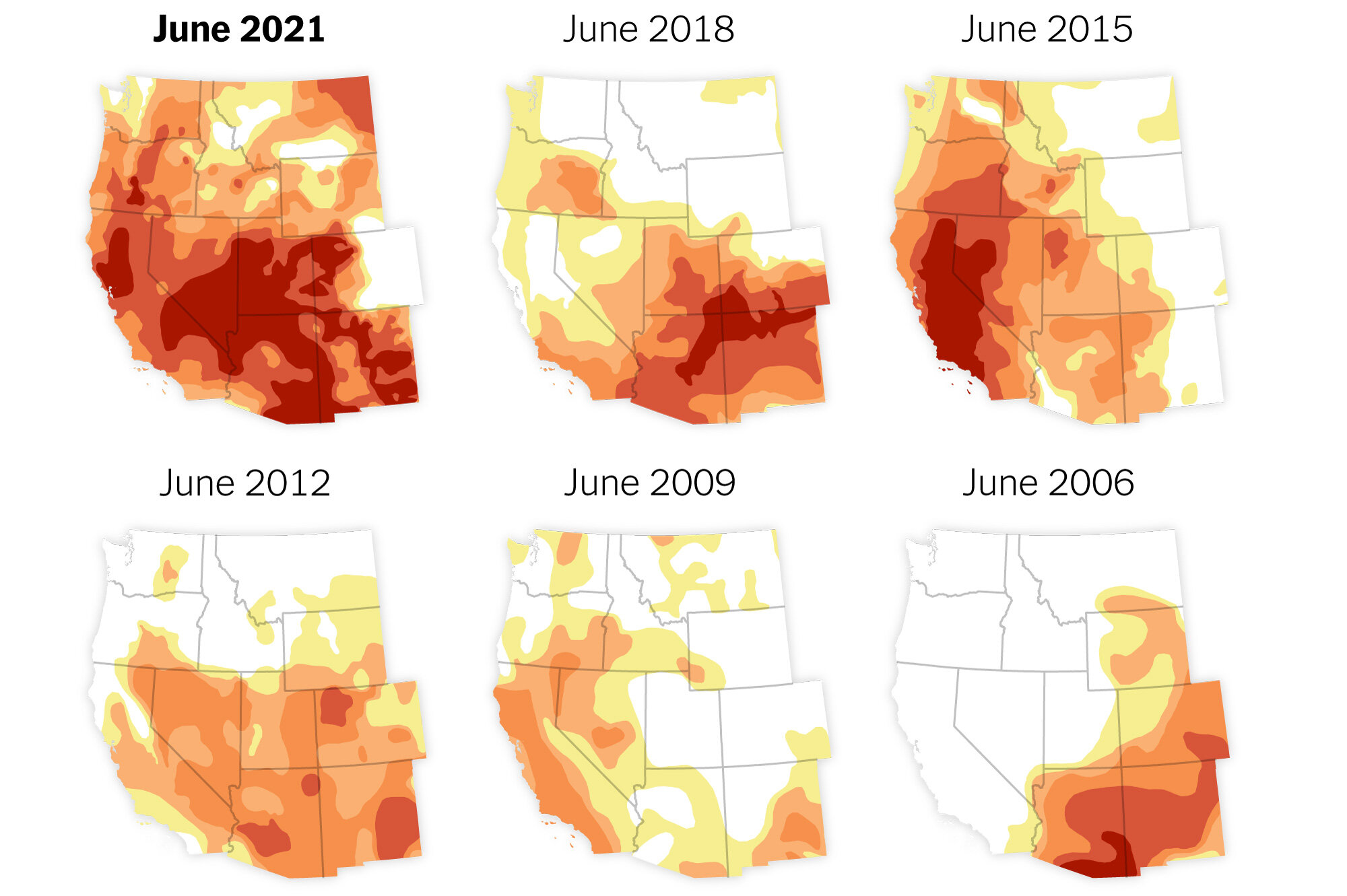 Although 2021 was hopeful to begin with for many people, it soon became unfortunate for the residents of the Western US. Alongside the record-breaking rise in the temperature and depletion in water levels, the Western US, especially California, has faced an acute drought.

According to the National Weather Service reports, the drought in California started in May 2020. Yet, its effects only mounted in early spring this year when the annual winter rainy season did not shower enough rain on the parched landscape. Drought is indeed a natural part of the primarily dry west, but the drought situation may be called dire this time. With the heat waves increasing, wildfires and crop destruction has become a widespread event in the west. Washington State has reported 475 such blazes so far, with the previous number being about 318. The west is the biggest supplier of crops in the US; with so many wildfires, the demand and the price of fruits and vegetables have gone up way high. The mountains of the west have experienced low snowpack, which is undoubtedly a result of climate change.

A recent satellite image by the European Space Agency has revealed that about half of the country is under the influence of this drought, encompassing states like Montana, Idaho, Washington, Oregon, California, Nevada, Arizona, and New Mexico. Moreover, Colorado, Utah, North Dakota, and Illinois are also facing drought conditions. In fact, this was the driest February in California for nearly 150 years! A photo of the drought has been compared to a similar photo at the same time the previous year. While comparing, it has been seen that the previously green Angeles National Forest, along with the Cogswell, Morris and San Gabriel reservoirs has turned entirely into a Mars-like place.

This is the second year that California has attained the lowest water levels in history. Many of California's reservoirs have dried up, and so have the lakes Powell, Mead, and Oroville. Authority has taken charge to remove the houseboats from Lake Oroville before their inhabitants face some crisis. Lake Mead is particularly facing the concern with the lowest water level ever since it was filled during the construction of the Hoover dam.

With all these natural crises, of course, an economic crisis is bound to follow. As the country's largest food producer, the west is also facing an acute financial crisis with the crops dying, frequent wildfires, and a low water supply. Canals meant for irrigation remain empty while the yields on the field lose their luster.

Climate activists around the world have blamed Climate Change and Global warming as the leading cause of this severe drought. But it must be kept in mind that Climate change itself is an effect of human activities. So it is we, individual citizens, who should take proper precautions against such a situation.

The government has come forward with many restrictions and plans to combat the drought and the economic crisis due to it. Fire restrictions have been imposed throughout the west as July 4th approaches. With situations so severe, the Biden administration has planned to build a new infrastructure for drought situations and is preparing for the major investment required for it. A fund of $5 billion has been proposed to control the western water shortage and build a dam there, producing less energy.

Finally, it is not only the government who only is capable of fixing the situation but all of our combined efforts that may bring an end to our sufferings. To materially combat this drought, we must follow the guidelines we often read in newspapers but ignore: saving water and not wasting it unnecessarily, finding sustainable methods to assist ourselves, and more. That nature is related to human life is a relation we cannot ignore, and we mustn't. To ensure that we live properly, we must also ensure that the environment around us is the same. Then only can we combat any natural disaster, be it a plague or a drought.