Will the Supreme Court Defend or Ignore LGBT+ Rights

On October 8, the Supreme Court heard three cases relating to discrimination of LGBTQ individuals that could shape how the Civil Rights Act is interpreted and who is actually protected. 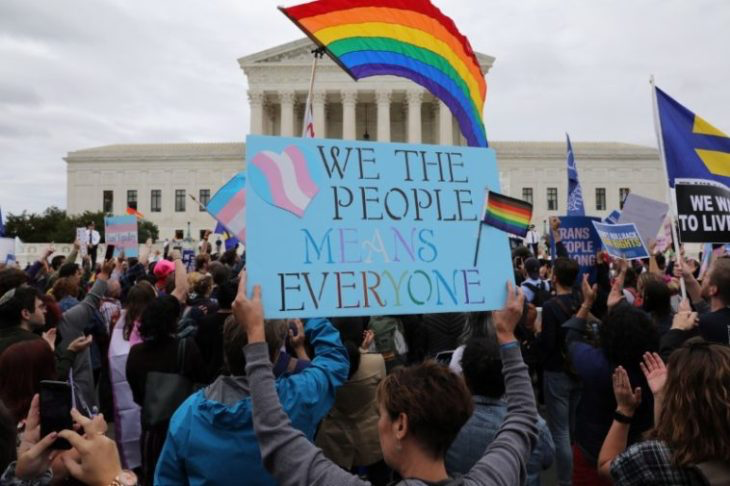 On October 8, the Supreme Court heard three cases relating to discrimination of LGBTQ individuals that could shape how the Civil Rights Act is interpreted and who is actually protected. Currently, less than half of the states in the US protect against discrimination on the basis of gender identity or sexual orientation—two crucial components in the cases being brought to the Supreme Court.

Two of the cases,Altitude Express Inc. v. Zardaand Bostock v. Clayton County, deal with men who claim they were fired because of their sexual orientation.  The other case,  R.G. & G.R. Harris Funeral Homes v. EEOC, deals with a transgender woman who was fired after her boss told her that he would disobey “God’s Commands” if he permitted her “to deny [her] sex while acting as a representative of [the] organization.” At the center of the plaintiffs’ arguments lies the Civil Rights Act; They argue that they are protected from discrimination under Title VII, which makes job discrimination illegal due to sex. In the cases Zarda and Bostock bring, they claim that Title VII applies because if these men who love other men were women, they would not have been fired. This is precisely Justice Kagan’s view on what falls under Title VII protections: “Would the same thing happen to you if you were a different sex?”

However, the Trump Administration is arguing that the Civil Rights Amendment was not referring to sexual orientation or gender identity when the law was passed in 1964. Justice Alito, a conservative, stated that it was not up to the court to change the meaning of sex as it was written. But Justice Ginsberg argued that in 1964, sexual harassment had yet to be named and the Civil Rights Act was still determined to protect against it. While the court has a conservative majority, Justice Gorsuch, Trump’s first nomination to the Supreme Court, stated that he believed the plaintiffs had a winning argument but questioned whether such a landmark decision should be left to lawmakers to clarify. He believes that such a consequential social decision should not be carried out by the court and that lawmakers should clarify the law instead of the court. Chief Justice Roberts, who is seen as the court’s moderate, said that he worried that this decision didn’t do enough to protect those who hold religious beliefs that are opposed to LGBTQ individuals. The question remains: Will the court defend LGBTQ rights despite Justice Kennedy, a proponent of such rights, having retired?

The ruling is expected to come this upcoming summer, during the height of the 2020 presidential campaign. It has the potential to change the lives of 4.5% of adults in the US who identify as LGBTQ. But the consequences reach even larger: it has the potential to reignite tensions like the push to pass ‘bathroom bills’ that bar transgender individuals from using the bathroom of the gender they identify with. These cases bring brought before the Supreme Court have the potential to expand the Civil Rights Act to protect against forms of discrimination that occur in the workplace far too often.