On April 11, 2019, the Sudanese military council announced that President Omar al-Bashir had been ousted. 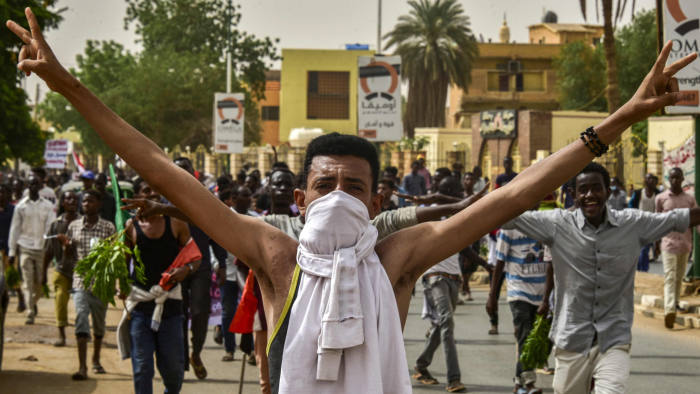 On April 11, 2019, the Sudanese military council announced that President Omar al-Bashir had been ousted. After a week of civilian protests in front of the nation’s military headquarters, al-Bashir, indicted for war crimes and genocide, was desposed from his 30-year reign. The nation’s military council agreed to compromise with civilian opposition by establishing a three year transition to democracy but denied demands for civilian rule in a situation that has become increasingly violent. In early June, a military crackdown on an opposition sit-in left at least 118 people dead, in addition to eyewitness reports of beatings and stabbings carried out by the nation's militiamen. In an attempt to hide the true death toll, corpses weighed down by rocks have been thrown into the Nile, in addition to the use of tear gas, the raping of women, and the burning of protestor’s tents.

The American public seems to have only recently caught wind of the injustices ongoing in Sudan, yet the country has seen conflict time and time again, including the nation’s war that led to the creation of South Sudan and the current genocide in Darfur. As a nation that pledges “liberty and justice for all,” the Sudanese peoples’ cries for democracy and a civilian government should hit home and be treated with much more care and attention than what is currently being given. In the past, the U.S. has entered foreign politics with the mindset that if it’s not American, if it doesn’t benefit America, it’s not our problem. If America—and the public—care about Sudan, other nations will follow suit to create positive support for a civilian-led government.

Although the U.S. State Department has condemned the military crackdown and the UN has called for the deployment of a monitoring team to Sudan, the disgusting human rights abuses still need to be carefully watched and further action should be taken. The Rapid Support Forces (RSF), who attacked during the military crackdown, have recently secured aid from Saudi Arabia and the United Arab Emirates (UAE). America deals major amounts of weapons to the Saudis and the UAE, who are currently using these arms to cause the mass suffering that constitutes the Yemeni Civil War. If the United States continues to sell weapons to the Saudis, who now work with the violent and abusive RSF, Sudanese civilians could lose their lives at the hands of American-grown weapons. What was once “Africa’s problem” could now possibly leave the US as indirect perpetrators of the violence occurring in Sudan.

It is important to note that around the same time the Notre Dame was burning, civilian suffering in Sudan had just begun. A conflict with black, African, Muslim victims is mentioned in the press but not given the same seriousness and focus as displayed by the thousands of dollars of funds rasied to rebuild the cathedral, perhaps showing where our priorities lie. A recent surge in social media advocacy for Sudan, while positive for Sudanese awareness, represents how preoccupied the public was with Western-centric issues that overshadowed Sudan, even as they were happening at the same time. Western-centric issues do not deserve more focus than conflicts such as Sudan. The struggle and suffering Sudan experiences today need support- support of a civilian government, support of a democratic nation, and the same support that was given to the Notre Dame. It is vital to care, understand, and act upon the atrocities that are ongoing. There can be no watching this time.