Why We Need to Focus on Yemen

War, famine, plague: these sound like the ingredients for a dystopian work of fiction, but they have been the reality in Yemen for over five years. 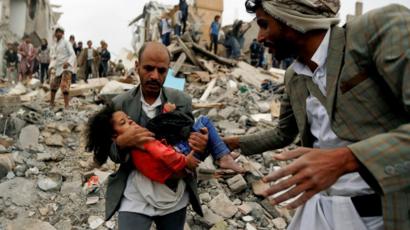 War, famine, plague: these sound like the ingredients for a dystopian work of fiction, but they have been the reality in Yemen for over five years.

In 2011, one unstable government usurped another: Saleh, an authoritarian leader, was overthrown by his deputy, Hadi. Even before this change in power, Saleh’s regime was turbulent and underdeveloped, forcing almost half of all Yemenis under the poverty line. Taking advantage of the unstable moment, the Houthi movement, a primarily Shia Muslim group (the religious minority in Yemen), began seizing control of northern areas. In 2015, Houthi forces took over the capital city of Sanaa, causing Hadi to flee Yemen temporarily.

Since 2015, Saudi Arabia has led over ten countries, including 8 other Arab states and supplied by the US and the UK, against the Houthis, who Saudi Arabia and its allies believe are backed by Iran. Using advanced American and British military equipment, Saudi Arabia conducts airstrikes while the Houthis strike back with suicide bombings and drone strikes, forcing 3.65 million civilians from their homes. Saudi Arabia has also blockaded Yemen’s ports since 2019 in an attempt to stop Iranian arms from entering, creating excruciating food and supply shortages. In April 2020, a painstakingly reached peace agreement was shattered by a third player, a southern separatist movement, declaring self-rule. This opened the floodgates for Saudi and Houthi forces to resume and escalate the conflict, and for militant terrorist groups in the Arabian peninsula to violently seize territory.

Estimations of the civilian death toll directly from the war surpass 100,000. If the destruction resulting from war as causes counts as well—which manifest as poverty, famine, and lack of access to remaining social services—then thousands more casualties can be added to that number. Two-thirds of the country is without a dependable or adequate food supply, two million severely malnourished children among them.

The civil war isn’t the only threat that Yemenis face—since October 2016, the largest ever recorded cholera outbreak has ravaged the country. In the past four years, there have been almost four thousand deaths and 2.2 million cases. The outbreak has been exacerbated by a severe lack of sanitation services and intact medical facilities. Half of Yemen’s hospitals have been rendered nonfunctional due to the war, and the surviving ones are overcrowded with patients and lacking basic equipment like disposable masks or rubber gloves. Yemen’s water supply is now both limited and contaminated, forcing civilians to choose between drinking water and exposing themselves to disease.

On top of civil war and cholera, the COVID-19 pandemic has wreaked havoc in Yemen for the past several months. The global recession in the wake of COVID-19, in tandem with Saudi pressure, has reduced aid from other countries and aid agencies. Reported cases are high—over half a million—but are still underreported, since tests are scarce and only administered to those with obvious symptoms. The Saudi blockade prevents sufficient medical supplies from entering Yemen; Houthi rebels hinder the distribution of whatever make it inside.

Due to Saudi and Houthi forces strangling the oil and diesel supply and destroying roads and railways, food is unaffordable and healthcare inaccessible. It is virtually impossible to adopt basic COVID-19 prevention measures, given the scarcity of soap and clean water. Further complicating matters is the complete absence of a central authority or means of informing the public. Existing medical facilities are crippled by cholera and supply shortages; there are only a few hundred ventilators in a country of almost thirty million people. Malnutrition, lack of sanitation, and stress have weakened Yemenis’ health, leaving them more exposed to COVID-19. Direly needed campaigns to provide vaccines for polio and tetanus, treat childhood illnesses, and attend to maternal and newborn health, have been suspended due to COVID-mandated restrictions on activity across the border.

Yemen’s future is in jeopardy because of the damage from the civil war and the diseases that ravage the population. Millions are starving, homeless, orphaned, sick. For the able-bodied, the pandemic has shut down schools, almost quadrupling the number of children unable to access education from 2 million to 7.8 million. The next generation of Yemenis—half of the country’s population is under 18 years old—is in life-threatening peril. If they outlive the two diseases and war, it is likely that they won’t have the education or resources to rebuild what little there will be left. The survival and reconstruction of Yemen demand the utmost attention and effort of the international community.

Serbia's Protests Could Usher in a Decade of Change