"Why Wasn't it Enough for Me to Say It?"

Time and again, victims of rape and sexual assault are shot down as liars or are told that their experiences were somehow their fault – but the fact of the matter is that very few rape accusations are false.

Hanley Renney
and
March 26, 2022
in
Justice
Courtesy of Vox 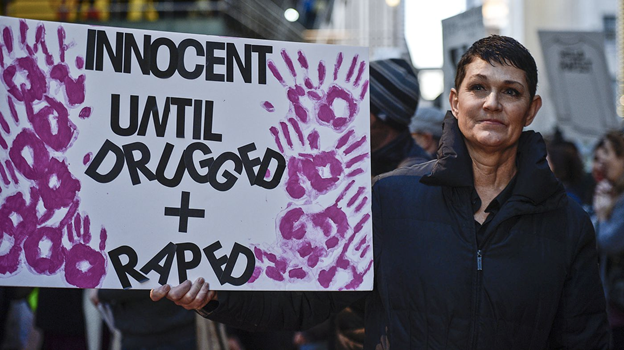 *To maintain the safety and anonymity of interviewees, asterisked names are pseudonyms.

Disclaimer: This piece contains descriptions of rape and sexual assault that may be triggering to some audiences.

I recently had the opportunity to watch the Broadway show Jagged Little Pill, a 2018 jukebox musical of the songs of 90s pop and alt-rock hit Alanis Morissette. The songs and characters explore countless social issues, meshing people from different backgrounds and situations together and casting off stereotypes and labels to form a cohesive cast and story that communicates to all audiences. One of the most prominent subplots within the musical is the rape of a girl named Bella, and her fight for justice as she struggles to gain traction and trust, even among those closest to her.

One of the young male characters, Nick, plays a crucial role in Bella’s case. He directly witnessed his best friend assaulting Bella while she was passed out, but struggles with the decision to corroborate her story as his parents and others question the implications involvement in this case could have on his future and education. In the end, he decides to go to the police and confess what he knows, but only after several other incidents involving his family members change his perspective on the issue.

When Nick explains to Bella that he did the right thing and finally told the truth, Bella is still extremely cold towards him, which he does not seem to understand. “But everyone knows the truth now,” Nick says.

“Because you said it,” Bella responds. “Why wasn’t it enough for me to say it?”

This line hits hard. In a world where rape is so common, why is it that society and the justice system would not believe Bella’s claim until a male witness verified her story? Why was the default response to dismiss her as a girl looking for attention, or to place the blame on her because she was unconscious due to alcohol consumption?

These are old questions, but somehow no one seems to have answers. Time and again, victims of rape and sexual assault are shot down as liars or are told that their experiences were their fault or in some way encouraged by behavior, clothing, or appearance.

The fact of the matter is that very few rape accusations are false. According to the National Sexual Violence Resource Center, “the rate of false reporting for sexual assault is in the range of 2-8%.” By all standards of probability, it would be wise to believe rape accusations, and yet the stigma around trusting these claims without “proof” remains. Accused rapists are innocent until proven guilty, while their victim counterparts are repeatedly written off as guilty of lying until there is proof beyond a doubt of their claims. Even when there is sufficient evidence, few rape cases proceed to trial, and an even smaller number of perpetrators are convicted. According to the Rape, Abuse, and Incest National Network, “Out of every 1000 instances of rape, only 13 cases get referred to a prosecutor, and only 7 cases will lead to a felony conviction.”

When there is little to no hope in the justice system’s ability to handle these cases, victims are often convinced that it is pointless to come forward. Rape remains a cultural taboo, perpetuating the relentless cycle of assault– and of silence.

While female rape cases are often cited, male victims are also common, and often even less likely to come forward. In a poll conducted by The Washington Post, several men shared stories of sexual assault. “One man described an incident with a fraternity brother— his roommate— that escalated unexpectedly. “He was really drunk that night, and he started hitting me,” the student recalled. “I wasn’t drunk at all. He kept trying to take off my pants. He tried pinning me down and groping me. It was a really bad struggle. I hit him as hard as I could, and I got out of it.” He found another place to stay, but he didn’t want to tell anyone what had happened. “I had nervous panic attacks. . .. I almost dropped out,” he said. If he were a woman, he said, he might have told people or asked for help. “Since I’m a guy, it’s a lot harder. If something happens, guys aren’t supposed to be victims. We’re supposed to be manly.” Along with the mistrust of the United States justice system, male rape victims often experience this additional pressure of the expectation that they will be “manly”, even following a traumatic experience, and many men view coming forward and reporting a rape or assault as a form of weakness.

Regardless of the victim’s gender, however, rape and assault often generate frightening effects in victims. Chanel Contos, an activist for sexual assault awareness, has brought these consequences to light through her movement Teach Us Consent. Through online and social media campaigns, Contos has succeeded in gathering over 6500 stories from young female victims of rape and assault. “These young women haven’t tried to kill their rapists, or even take them to court,” writes Julia Baird of The Sydney Morning Herald. “As their testimonies show, too many of them, racked with unresolved trauma, have tried to kill themselves instead.”

Even among those who are not victims, rape culture often leads to fear and anxiety in everyday, otherwise safe situations. According to Amanda Taub of Vox, “Rape culture is a culture in which sexual violence is treated as the norm and victims are blamed for their own assaults. It's not just about sexual violence itself, but about cultural norms and institutions that protect rapists, promote impunity, shame victims, and demand that women make unreasonable sacrifices to avoid sexual assault.” When sexual violence shifts away from something rare and taboo and becomes a common occurrence that is even to be expected, often with little to no consequence for the offender, we as a human society have a much larger problem than we realize. Rape culture is a culture of fear, both of others in our communities and of telling the truth should an event of assault occur.

The implications of rape culture are also responsible for miscommunicating what “counts” as rape or assault, especially to young people. Many teenagers in dating relationships often believe that sex within the relationship does not count as rape or assault, even if one party feels pressured or forced into the action. Aspen Madden*, a young sexual assault survivor, shares this excerpt from a creative writing piece:

“All she can hear are screams. The earth shakes beneath her. Her hands grasp for a wall that does not exist, and she falls to her knees… Thick darkness engulfs her, a solid black that presses on her mouth and her throat and her chest. She cannot breathe, she cannot think. Fingers grasp her ankles and her wrists as she crawls towards nothing, ragged nails digging into her skin… She pushes her forehead to the floor… What she is supposed to see, she does not know. Everything is simply pain, and pain, and pain. She does not deserve this. No one does… All she can hear are screams. This time, they are her own.”

“I wrote this when I was fifteen,” she recalls. “Almost immediately after losing my virginity to my boyfriend at the time. I recently reread the short story, which was originally intended to describe a girl’s journey into the mythological Tartarus. The scariest part is that it was about my own experience with sexual assault, and at the time of writing, I had no idea. I wrote it purely as a work of fiction. It took me over two years to realize that the experience I had was not safe, consensual sex. It’s almost like in writing this, my brain was trying to communicate to me that what I had gone through was not normal.”

Because of the uncertainty about what “counts” as rape or assault, victims may feel even more discouraged from stepping forward and sharing their stories, for fear of being shamed for overreacting or for lying. Overall, there is a general societal sense of rejection towards victims and their testimonies– and this needs to stop.

These numbers speak for themselves. As a society, we should all be asking ourselves this: Why was it not enough for Bella, for Aspen, for countless other victims to tell their own stories? Are we so in denial that these issues are real that we push them away? Are we ignorant, and do we need to be further educated?

Or – are we simply afraid of the truth?