With more transparency, ethics, and representation, this bill reestablishes the depth and importance of a government that is “Of the people, By the people, and For the people”

Anushka Sonawala
and
May 4, 2021
in
Politics
Courtesy of the Huffington Post 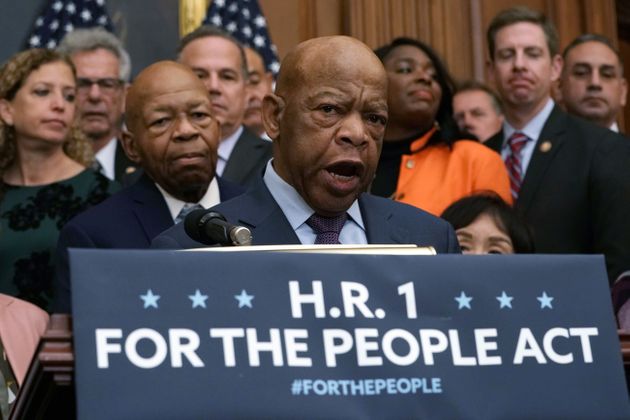 The “For the People Act” (also known as H. R. 1) is a multifaceted pre-eminent bill that effectively restores anti-corruption reforms within the currently scandalous electoral system. The “For the People Act” was primarily introduced in 2019. The bill failed to pass through the Republic-led Senate at the time, however, with the Democrats’ current dominance, chances of the bill being passed are significantly higher. This bill could potentially modernize voter rights, abolish extreme corruption and gerrymandering (the process of altering a voting district in favor of one party), and increase focus on important issues. Enforcing imperative voting rights and increasing accessibility to ballots would essentially make a larger number of American citizens’ voices heard. Interferences such as dark money (funds from unknown sources that manipulate the results of elections), and weak enforcement of current laws could perpetually be eliminated with the H. R. 1. If passed, it could possibly be a game-changer for democracy in the United States.

Why exactly should people care about this? Well, H. R. 1 has the power to transform the United States’s democracy, and is the most effective anti-corruption reform that could be approved in generations. While it cannot solve every single problem within the complex electoral systems, it has solutions to numerous critical issues, and policies that could redefine society. If ballots are more accessible to citizens, more diverse groups have the ability to participate, and when people of all communities have the opportunity to vote, we offer them the chance to be well represented. Not only does it fix current voting discrepancies, but it benefits future elections.

It’s important to understand the implications of different policies. The For the People Act promises citizens voting rights reforms that are exceedingly significant, and the H. R. 1 institutes Automatic Voter Registration. Automatic Voter Registration allows Voter Registration Forms to be sent out to all eligible electorates by default, with the exception that an electorate could opt out of the procedure. The United States’s current system makes registration encumbering, which is why many people do not actually vote. With opt-out voter registration, more people have the platform to vote, which empowers and amplifies the voices of American citizens.

Voting by mail is also a part of the comprehensive strategy. This allows citizens to send in their forms without waiting in long lines. This is a secure way of handing in a ballot, and it prevents cyberattacks that overturn votes. The paper ballots that are physically mailed in are counted in one central location, and the entire process is overseen by a judge. To ensure that a vote is secure, the For the People Act also cogitates the option of Same-Day Voter Registration. This is crucial because it can safeguard a vote from cyberattacks, or mistaken voter purges (voter purging is the process of cleaning out voter rolls, and this process deletes names from registration lists when people pass away, move, or become ineligible due to complications. However, there can also be an error in data collection, and this can unethically erase an eligible voter’s name off the registration list, prohibiting the electorate from voting). This would allow an electorate to both register and vote on Election Day. Voter Rights Reforms in the H. R. 1 not only make registration easier, but also increase accessibility to ballot boxes. Additionally, the H. R. 1 necessitates each state to create a secure online portal for voter registration, rectification, or withdrawal. The For the People Act also reestablishes the right to vote for previously incarcerated individuals that have completed their sentence. Additionally, the H. R. 1 will mandate a minimum of 15 days in-person early voting.

Big money and dark money unfortunately play a dominant role in current politics, however the H. R. 1 works on eradicating it with its DISCLOSE Act. Any organizations that are a part of political campaigns, or are involved in political activity and are being funded, are obliged to disclose their donors if the donation amount is more than $10,000. Apart from these efforts, H. R. 1 also includes small donor public financing. These donations can amount to a minimum of $1, and a maximum of $200. These donations can be made by regular eligible citizens that want to make their political influence further supported. Another benefit of this is that, for every dollar donated, the federal government multiplies it by 6! Therefore, a donation of $20 finally sums up to $120. Conversely, when millions and billions of dollars are flooded in by elite people, the elections can be unjustly influenced by only a few powerful individuals and this tacitly leads to underrepresentation of minorities.

There are three prime reasons this is a positive addition to campaign financing. Firstly, this empowers an array of diverse candidates that cannot connect themselves to ethical big money donors. Secondly, it comes from the people of America, and the size of the donations required per person isn’t huge. When it comes from the people of America, we know that they are donating for purposes they truly believe in, allowing fair representation. Thirdly, the program is not funded by taxpayer money! It is funded by extra charges on criminal penalties of corporate offenders.

H. R. 1 also introduces ethical screening processes.To confirm a presidential and vice-presidential candidate’s clean record, candidates must undergo a number of ethics checks. The primary requirement is that the candidates must disclose their tax returns for 10 years prior to their running. Moreover, members of the Congress will not be allowed to settle sexual harassment accusations with taxpayer money. The Government of Ethics will also be permitted to introduce “lobbying registration requirements” so that special interests cannot hire lobbyists that specifically influence politicians in morally reprehensible ways.

These are merely a few of the solutions and policies this 800-page document suggests. The H. R. 1 was already passed by the House of Representatives on March 3rd of 2021. The Senate must now pass it to make it effective, and throw out barricades embedded in electoral structures. Unfortunately, there is a filibuster that is delaying Senate action on this bill (which puts it in slight danger of failing). Nevertheless, citizens need to push for immediate action and eliminate the unnecessary filibuster. You may text the word RESIST to the number 50409 and tell them that you want the H. R. 1 to be past, and you want to eradicate the filibuster. Visit weall.vote/forthepeople to urge Senators to support the For the People Act. Citizens need to pass this bill right now because it affects the welfare of the people of America, and democracy. With more transparency, ethics, and representation, this bill reestablishes the depth and importance of a government that is “Of the people, By the people, and For the people”.