As the dominant political party of India, the Bharatiya Janata Party (BJP) has been pursuing its nationalist agenda at the expense of religious minorities.

Arjun Verma
and
March 24, 2020
in
Religion
A protester shouts slogans during a demonstration against India’s new citizenship law in Mumbai this December. (Photo Punit Paranjpe/Getty Images/Slate) 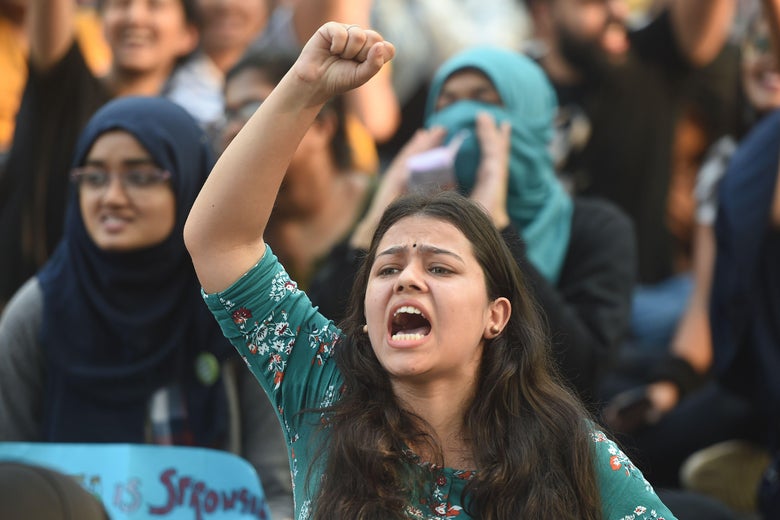 Tensions between Hindus and Muslims in South Asia have culminated in violence for decades without an end in sight, both on the battlefield and in the minds of the people. These obviously undesirable conflicts are not founded in an inherent animosity between Hindus and Muslims, but instead in British colonialism and the ways in which imperial forces pitted the two against each other, creating a long history of shared conflict.

However, countrywide brutality has recently spilled over to the international level. As the dominant political party of India, the Bharatiya Janata Party (BJP) has been pursuing its nationalist agenda at the expense of religious minorities. BJP officials have implicitly authorized a populist agenda that unfairly targets Muslims. The violations of human rights in Kashmir, from unfairly stripping millions of their citizenship, to discriminating against Muslim immigrants are all part of a larger plan to desecularize India into a Hindu state.

This violence has escalated recently to the point where Indian authorities have implicitly authorized mob violence against Muslims. Just recently, while an Indian mob was attacking innocent Muslims, “[t]he Delhi police, who report directly to Home Minister Amit Shah, either stood idly by or escorted the mobs” (Kamdar). When the police, supposed defenders of rights for everyone, are assisting in a targeted effort to discriminate against a certain population, it signals that the threshold was crossed long ago.

First, this discrimination based on religion is unjustified and the rest of the world needs to condemn it. A nation’s religious makeup is no basis by which to commit violence against religious minorities. While the people themselves are no less to blame, the police have a duty to remain fair and nondiscriminatory. A person’s religion is not something that makes them more or less valuable; rather, it is a fundamental right, essential to the expression of their beliefs.

Second, the mob mentality to attack Muslims simply because others are doing the same is harmful. This mindset is dangerous and only abets injustice. Following a mob does not bring justice or liberty or safety, but instead creates chaos and discrimination against a minority.

How can we help combat the BJP’s anti-Muslim campaign? There has been a growing grassroots activism movement to resist this problem, both in India and across the world. Groups have peacefully protested the Modi administration’s move to implement its Hindu nationalist agenda and the religious discrimination it encourages. One notable group involved in the movement against Modi is Students Against Hindutva (Hindu nationalism), which has grown “from an open letter into a national coalition with a presence at over 18 American universities” (Singh). These groups show promise, but more can be done to fight the legal discrimination that is ongoing in India.

For the same reason that we condemn other acts of discrimination such as hate speech, it is our ethical responsibility to stand in solidarity with groups who fight unjust oppression. A person’s religion or historical background should never be grounds for violent targeting and legal discrimination.