The residential school system has traumatized Indigenous individuals, families, and communities for generations.

Snayini Das
and
August 10, 2021
in
Justice
Courtesy of CBS News 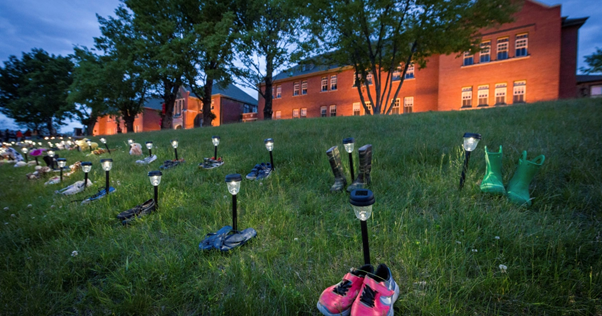 The extensive residential school system set up in the US and Canada went by the so-called objective of ‘educating Indigenous children’, but the real account behind the system involved forcing assimilation of Indigenous students into Christian and Euro-Canadian/Euro-American ways of lifestyle. Officially operating from the 1880s until the end of the 20th century, as recently as 25 years ago, the residential school system used to compulsorily separate ‘students’ from their families and force them to reject their own Indigenous cultures, heritages, languages, etc.

In the case that any student went against any of the rules, they were severely punished – and punishment included dreadful physical, sexual, emotional and psychological abuse of the students by the staff members of the residential school. The system always aimed to wipe out the continent’s Indigenous culture – the schools sabotaged Indigenous, First Nations, Métis, Inuit cultures across the US and Canada. The residential schools even had the explicit objective of  grading the Indigenous students poorly, and compelled the students to focus mainly on manual labor in agriculture, industries such as woodworking, and domestic work such as laundry work and sewing instead of studying.

The residential school system has traumatized Indigenous individuals, families, and communities, for generations – due to being separated from their families, students did not have much access to a nurturing family life and henceforth, did not attain the knowledge to easily raise a family on their own. The government and multiple churches collectively worked towards vanishing the Indigenous culture and lifestyle totally – what was this, if not a form of genocide?

The government and the churches involved – Anglican, Presbyterian, Roman Catholic, United- even started to acknowledge, from 1990s onwards, the fact that the education scheme under the residential school system was organized with an objective to “kill the Indian in the child”. This brutal system of oppression was ongoing until as recently as 1996.

On June 30th, a mass grave of 182 children was unearthed close to former St. Eugene’s Mission School in Cranbrook; the findings of June 30th only add to the rising number of unmarked burial sites discovered near residential schools across Canada in recent months- some such cases were of 215 graves in Kamloops found on May 27, 2021, and another 751 graves found on June 24 in Saskatchewan.

Chief Jason Louie of the Lower Kootenay Band (a member band of the Ktunaxa Nation Council) urged that the Catholic Church must be held legally accountable for operating the whole system; he added “We were robbed of future elders. Those children, if they had not passed away, could have been elders and teachers in our communities, the keepers of knowledge. It’s devastating.”

In 1998, the Canadian government introduced, ‘Gathering Strength: Canada’s Aboriginal Action Plan’, a long-term, broad-based policy approach, including the ‘Statement of Reconciliation: Learning from the Past’, in which the government officially recognized and apologized to the many people who experienced physical and sexual abuse at these residential schools.

In 2008, the federal government of Canada settled to an agreement according to which nearly $2 billion would be compensated to the former students who had attended any of the 130 Canadian residential schools. According to Indian Affairs Minister Chuck Strahl, “the money would close this sad chapter of history in Canada.”

But are these apologies and the payout really justified as ‘compensation’?

What will these do against the continuing hate crimes against people belonging to Indigenous communities?

Even beyond the Canadian government’s role in these atrocities, in 2018, Pope Francis even denied to personally issue an apology for the role the Roman Catholic Church played in operating the institutions or the abuse suffered by Indigenous youth in the US and Canada.

Owing to the recent ‘discoveries’ of many of these mass graves, the Canadian government has called on the Pope to issue a formal apology for the role that the Catholic Church has to play; in response to that, Pope Francis has decided to meet with Indigenous leaders later this year to discuss coming to Canada to apologize for the church’s role in operating schools that abused and forcibly assimilated generations of Indigenous children. In a situation where the Church is still in doubt about a direct apology for the hatred it operated, how can we even consider that the ‘chapter has ended’?

How many more graves must be uncovered before something is done?