Why Holocaust Themed Christmas Ornaments are Not Acceptable

The products in question are incredibly disrespectful to Jews and other groups that were harmed in the Holocaust.

Eva Hecht
and
December 25, 2019
in
Religion
Courtesy of HLN 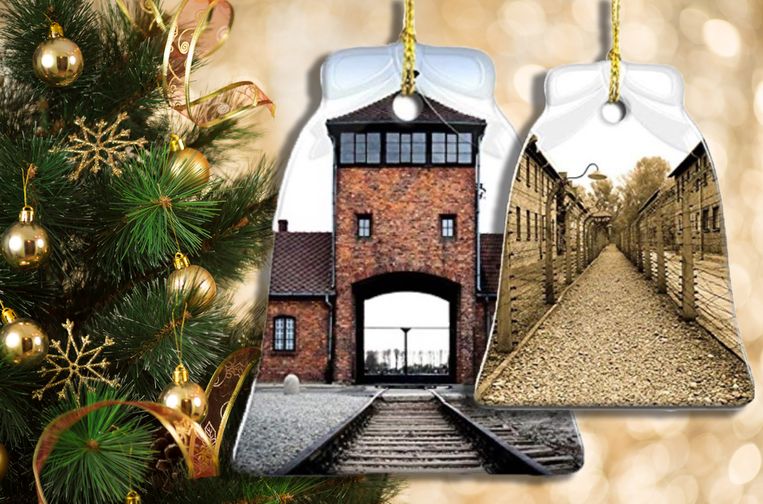 This holiday season, the online retail giant Amazon came under fire for selling novelty items such as Christmas ornaments and bottle openers depicting Holocaust imagery. The products in question are incredibly disrespectful to Jews and other groups that were harmed in the Holocaust, and were removed from the platform after Amazon was called out on Twitter by many prominent Holocaust memorial organizations and Jewish groups. However, it’s very concerning that they were ever for sale in the first place and that there’s a market at all for such items. In a time when Jewish people in the United States face alarming rates of antisemitism, this scenario feels like yet another contribution to the daily barrage of hate that threatens our safety.

A single Christmas tree ornament doesn’t seem very dangerous, but products like the Auschwitz themed ornament—described as a “memorable gift, perfect for every festival”—and the bottle opener featuring the barbed wire fence of the camp that murdered over a million people—described as “a beautiful pattern nested in the middle”—are part of a larger environment that is far too tolerant of casual bigotry. This hatred and insensitive ignorance leads to greater violence. Just last week, a synagogue in Beverly Hills was horrifically desecrated and a fatal shooting at a kosher grocery store in Jersey City took four innocent lives.

We must not allow such offensive objects to exist in our public spaces, for to allow the more unassuming forms of intolerance is to enable the louder, more violent forms that threaten our lives and those of others. The products were taken down within a day of their widescale online condemnation, yet it seems that Amazon has a long ways to go with regard to removing hateful products from their inventory, as a 2018 report from two watchdog groups indicates that amazon profits from the sale of white-supremacist propaganda such as books and swastika jewelry- despite the company’s policy against selling products that promote hatred.

It is awful that such disrespectful items were made profitable on Amazon. Still, something can be learned from this situation. Public outcry motivated Amazon to do the right thing. If we are vocal in our dissatisfaction with Amazon and other similar companies, we can start to make change in the systems that so often allow discrimination. Corporations want the consumer to be satisfied because we vote with our dollars, and when public protest endangers their profits they’re forced to listen.

The same goes for allowing casual hate to permeate our communities. As often as is safely possible, it is necessary that we speak out against the discriminatory language and actions that often happen daily. As human beings, we have the power to motivate ourselves and others to be better and more accepting people, and our country needs us to use that power now more than ever.

SHEIN in a Crossfire of Cultural Difference and Ignorance