In total, despite the NFL’s long history, there have only ever been sixteen openly gay or bisexual players

Liv Hodgson
and
July 17, 2021
in
LGTBQ+
Courtesy of The New York Times 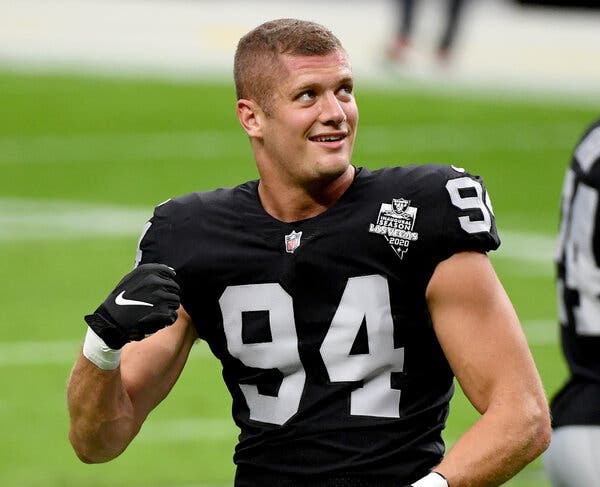 Football players have come out as gay before, but most have come out after retiring from the NFL. Wade Davis was the first, nine years ago in 2012. Another was Michael Sam in 2015, who was active at the time but cut by the St. Louis Rams before the season began and soon after retired. In total, despite the NFL’s long history, there have only ever been sixteen openly gay or bisexual players. And it wasn't until now, in 2021, that one of these players is an active NFL footballer: Carl Nassib of the Los Vegas Raiders.

On June 21st, Nassib posted a video to his public Instagram page. “What’s up people, I’m Carl Nassib. I’m at my house here in Westchester, Pennsylvania. I just want to take a quick moment to say that I’m gay.” He then proceeded to share a donation of $100,000 to the Trevor Project, a non-profit that focuses on suicide-prevention for LGBTQ+ youth in the United States.

Though nonchalantly stated in the video, Nassib’s coming-out was a trailblazing moment in LGBTQ+ and NFL history. Much of the stigma around gay males stems from a culture of toxic masculinity, and the association of being a gay male and being more feminine, or, in a sense, “less of a man.” This is counter to the world of football and the NFL, which is typically viewed as the epitome of a masculine sport. There is a prevalent stereotype that homosexual males are not tough or “macho” like typical footballers because it is strongly associated with more feminene traits. Of course, males who are more expressive of feminne traits are just as valid, and the breakdown of toxic masculinity would work to protect them from harassment and discrimantion as well. Nassib himself discussed his belief in the importance of representation in his coming out video, which is precisely why his announcement was so important. It breaks down the stereotype, and perpetuates the idea that being “gay” is merely a sexual preference that is exclusive from other characteristics, including personality and physicality.

In Nassib’s video, he expressed his wish that one day “coming out” would no longer be an event. Davis stated a similar opinion in his recent piece for Vox. The goal is to eventually realize a reality in which players of all sexual orientations, genders, and identities are unquestionably present in the world of sports. A place where there is no more fear stemming from a lack of knowledge, or a lack of diversity. Nassib’s announcement, and his continuation as a pro-football player, is a historical and important step towards this future.