For most of us first or second generation kids, this tweet hit home.

Nawaal Ahmad
and
December 24, 2019
in
Representation
Courtesy of PJ Media 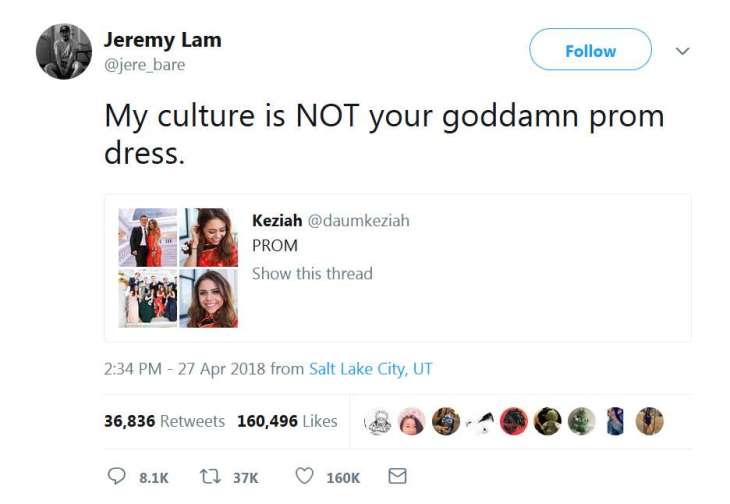 For most of us first or second generation kids, this tweet hit home. It made us think about all the mishaps of growing up with a family that wasn’t necessarily “American”. Upon viewing the controversy for the first time, I was appalled at the audacity of this young girl to disrespect such a sacred piece of Chinese fashion and history. How could someone so mindlessly and shamelessly “thrift” an artifact of the Chinese culture? After discussing the issue with my peers, I discovered that the offense was not obvious to all. Elements of various cultures have been selected and thrown into the Melting Pot that we so proudly call our country for years. While at times this serves as an ideal habit in an inclusive and growing society, some viewpoints are neglected.

I am not of Chinese descent or ancestry, but I do come from the South Asian cultures surrounding the area. As a second generation teen born and raised in this country by my Pakistani-born parents, I was forced to recall the episodes of being raised in a Pakistani home. I resided with my sibling, parents, andgrandparents; a simple custom shared across many cultures but not common to American households. This led to countless interactions with classmates that came over to do a project or have a playdate: questioning my grandmother’s shalwarkameez, a traditional outfit originating in India and Pakistan, asking why my mother is wearing a hijab to pray her namaz, the compulsory prayers, or inquiring about the distinct smell of pakorasfrying, a fried dough batter with vegetables. Of course, the young child that I was danced around the topic to avoid revealing the traditions of my heritage. Curiosity is appreciated, but the condescending tone that is carried by all the questions and stares gave the younger, naive, version of myself something to be ashamed of.

And now, as a 17-year-old who carries her faith and culture on her sleeve, I still come across moments where I have to pause, wonder why others are not reacting the same way I am, and question whyI am offended. The decision to wear this dress seemed harmless in theory, but to those of us who grew up being tormented for the rituals and traditions of our families, it was like a stab in the back. As a Muslim-American with a Pakistani culture, I would often find myself being ridiculed for the henna on my hands following the days of Eid. Classmates would tease me about the weird orange stuff covering my hands. And now, those very classmates are flaunting their new henna tattoos on every social media platform, pretending to share in the alluring tradition.

The reason this tweet deserved so much backlash from both directions is that neither group understood the other’s view, and in one side’s case, their struggle. American society is built off of manipulating other cultures to fit the mold of what they perceive as the desired look for that half-century. Each generation of immigrants and foreigners withstand the hells of America’s most favored cultural elements of the year, poking and prodding at the new imports like fresh meat. Too often do people from a culture other than American or Western European watch passively as Americans dissect their belief systems, fashion trends, cuisines, and customs to determine what they will classify as “normal”. Not only does this habit feed the carelessness and ignorance of the American population, but it encourages and guarantees the perpetual bullying of cultures so rich in pride and magnificence into becoming insecure, sensitive, weak, whitewashed.

The centuries-old tales of American imperialism haunt our parents and grandparents, as the majority of the effects are still evident today in their countries. Racism and ethnocentrism are not an excuse to demolish the very languages and traditions that give America the glorious descriptor of ‘diverse’. So no, it is not just a dress. It is an attack on our childhoods, on our parents, on our cultures. It is an attack on the things that make us who we are.