Black Lives Matter, ACAB, 8 Can’t Wait. They’re more than hashtags–they’re rallying cries that help to spread awareness and mobilize people in the fight against police violence. But are they leading to real change? 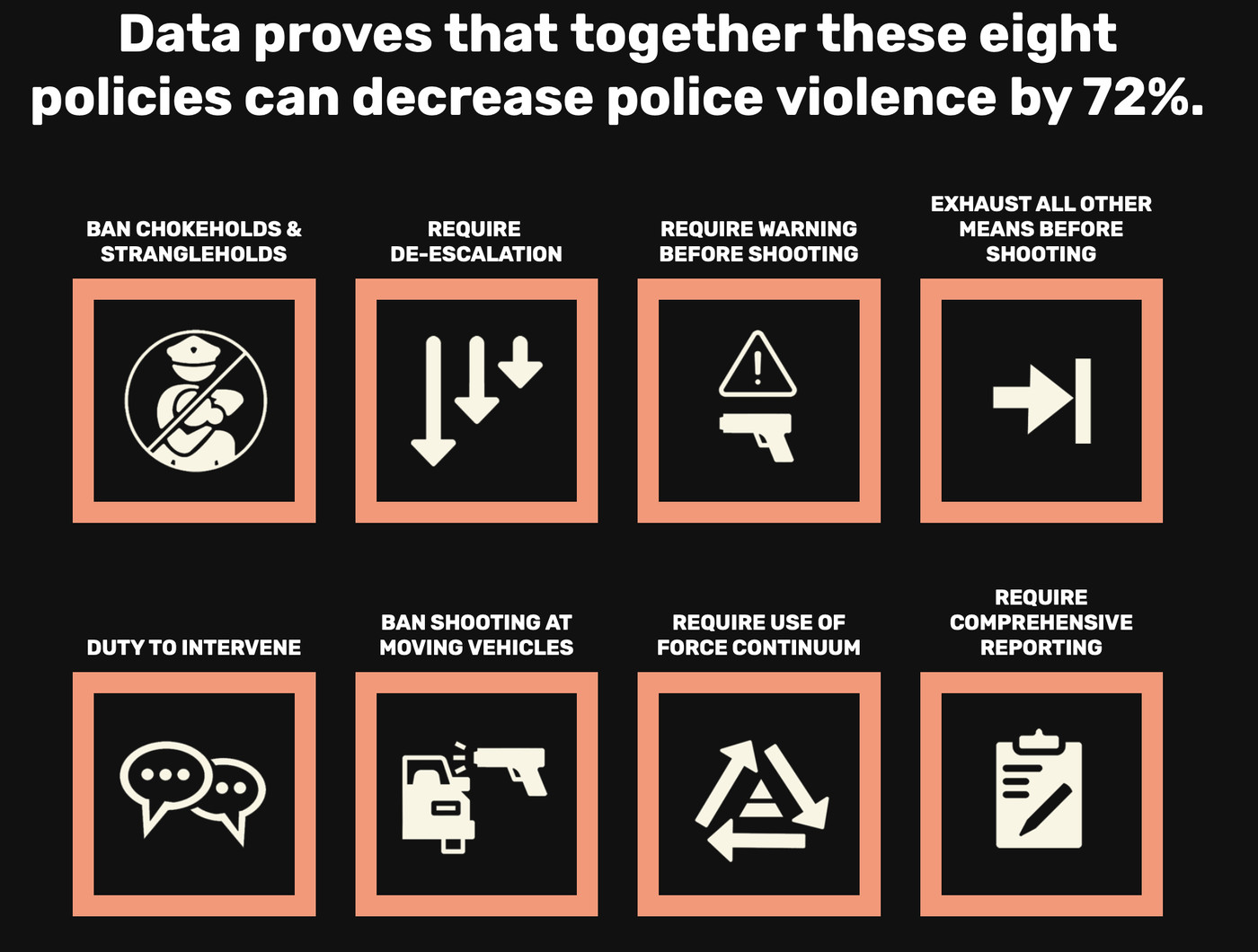 As international outrage over police murder and brutality grows, several campaigns, organizations and protest refrains have emerged: Black Lives Matter, SayHerName, ACAB, defund the police, 8 Can’t Wait. They’re more than hashtags–they’re rallying cries that help to spread awareness and mobilize people in the fight against police violence. But are they leading to real change?

“Eight Can’t Wait” in particular has beared a lot of criticism in the past few weeks. It was created by Campaign Zero, which started in 2015 amidst the Black Lives Matter protests in Ferguson. As stated on its website, it is “a campaign to bring immediate change to police departments.” It consists of eight policy proposals that Campaign Zero says need to be implemented immediately in police departments. Recently, the platform garnered attention from activists, politicians and celebrities as it trended on social media in the wake of George Floyd’s death, and people from cities nationwide contacted their local governments to ask them to adopt the eight policies.

The proposals include a ban on chokeholds and shooting at moving vehicles, and the requirement of de-escalation, warnings before shooting, the duty to intervene, use of force continuums, and comprehensive reporting of incidents. Each principle is based on the concept of harm reduction, and their selling point is the claim that they could reduce police murders by 72% if all eight policies are adopted. However, as a Medium article by Cherrell Brown and Philip V. McHarris explained, that statistic may not be completely credible. Aside from a small sample size and time frame, the study’s design contained several major holes and a “faulty model of analysis.” The policy proposals do have the potential to reduce police use of force. However, making such a bold claim (based on questionable data) about the extent to which it can do that is both irresponsible and harmful.

Those involved with the campaign, including DeRay McKesson and Samuel Sinyangwe, have defended their work and its intentions. Though they have acknowledged some of its shortcomings (Campaign Zero issued a formal apology on its website), they stand behind “the impact we were able to make” and the need for “policies that can reduce the harm caused by police in the short-term.”

It’s true that immediate solutions are desperately needed, and the path to ending police violence calls for a variety of ideas and innovations. As McKesson noted in a GQ article, realistically “police are still going to be here tomorrow,” and it’s critical to immediately reduce their power and limit the force they’re allowed to use. However, despite their intentions to bring short-term solutions, Eight Can’t Wait missed the mark.

While the founders of the campaign have repeatedly said that Eight Can’t Wait is a short term solution to police brutality rather than the end goal, that message seems to have been buried in the public conversation. Amidst waves of protests demanding police defunding, the idea of eight policies that can be implemented and supposedly stop the majority of police killings has taken hold with many Americans. Many people are just being introduced to anti-racism and abolitionist ideas, and this set of eight, easily digestible “solutions” has given people an easy way out of digging deeper into the more radical systemic changes that our police forces and prisons need.

It’s not just the public who has jumped on board; dozens of cities have pledged to implement the eight policies, from Charlotte, North Carolina to Pittsburgh, Pennsylvania. However, the widespread acceptance of the campaign, particularly by local police forces and politicians, may be a red flag rather than a cause for celebration. In a country that weaponizes police against its own people, particularly Black people, disabled people, undocumented people and other marginalized groups, in order to serve its own interest, no meaningful change is going to come without resistance from those in power.

Police departments have been using Campaign Zero’s proposals as a PR opportunity to pat themselves on the back for the policies they have in place (regardless of how those are being enforced). Other departments have used it as a way to appease a rightfully outraged public. They pass the eight policies (or, in many cases, only a few of the eight policies) and then claim that they’re making real change without actually addressing white supremacy, gender-based violence, lack of mental health support, or the multitude of other deeply rooted issues that demand America’s police force be abolished rather than reformed.

This is not the first wave of protests against police violence in recent years, and Eight Can’t Wait is not the first set of reforms that co-opts the urgency of Black Lives Matter protest and claims to be a “first step” to defunding the police. These policies have existed in cities throughout the US for decades, yet police brutality has persisted. Chokehold bans, for example, are already required in one-third of the cities that Campaign Zero studied. The NYPD banned chokeholds, but still used one on Eric Garner. The officer was never indicted. Duty to intervene laws exist in almost 50 of the cities studied, including Minneapolis, where George Floyd was put in a chokehold and killed by police. Still, three police stood by and watched as he was murdered. Clearly, the issue is not a lack of police reform but lack of accountability.

It's easy to see how counterproductive the eight proposals are when looking at them through the lens of Critical Resitance’s four questions on whether a reform to the police system will actually lead to change.

The first question asks whether police funding will be reduced. The creators of Eight Can’t Wait chose the policies specifically because, hypothetically, they should not require that more money be poured into police budgets. Realistically, however, these reforms will require additional training at the very least, and possibly more resources, surveillance, weapons and officers–which all require more money. The eight policies don’t include any mention of taking weapons or funding away from police to be invested in community well-being instead.

Next, Critical Resistance asks whether the reform will challenge the idea that police increase safety. Eight Can’t Wait is rooted in the assumption that police will hold themselves accountable, even though police know that they won’t be punished if they break the law. Essentially, it relies on police officers themselves to end police violence.

The last two questions ask if the reform will reduce the technology, tools, and tactics of policing and whether it will reduce the scale of policing. Many of Campaign Zero’s proposals inevitably call for more tools and surveillance. Requiring that shooting be the last resort, for example, will bring in different weapons and ways to use force. Duty to intervene laws could bring in more patrolling and, by definition, would increase policing and police presence.

None of the eight policies do anything to address the root causes of police violence. The campaign completely ignores those who are most heavily targeted. For instance, as activist Imani Barbarin pointed out on Twitter, “none of these initiatives address tactics for interacting with the disability community who are often threatened by police interactions.” They skirt around the central issue of racial violence and disregard the fact that the police don't use force and violence equally to begin with.

Eight to Abolition, a campaign created in response to Eight Can’t Wait, asserts that the eight policies have “already been tried and failed” and “mislead a public newly invigorated to the possibilities of police and prison abolition.” They outline an alternative eight steps that include taking police out of schools, demilitarizing communities, providing safe housing, and repealing laws that criminalize survival. These alternatives recenter the conversation around the communities most affected by violent policing and deal with the core issues head on.

For every police reform that has been implemented or will be implemented in the coming weeks to pacify protestors, there are a dozen more Stand Your Ground laws, Three Strike rules, mandatory minimums, arrest quotas, and other policies that target poor people and people of color. The harm that these create will not be erased by eight policies. They are symptoms of a system that does not value all human life equally, and until that single truth is addressed, no amount of reform will have meaningful impact.

Ultimately, racial justice means reimagining public safety beyond policing. It means recognizing that the police force was not created to serve and protect all Americans equally. It means redistributing power back to the people and redirecting funds into education, mental health, transportation, parks and the well-being of communities.