They cannot simply forget, as every moment they are horrified by their experiences.

Arpita Singh
and
November 1, 2021
in
Justice
Courtesy of NPR 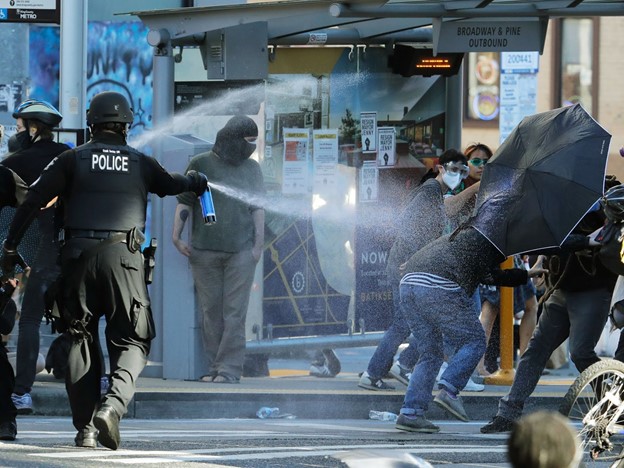 "Tear gas shot into a crowd of peaceful protesters." "10 people violently arrested during today's protest." "Rubber bullets used to disperse a group of protesters." Unfortunately, these statements may sound familiar to many as they were our reality in 2020. Most people worldwide read the headlines, potentially shocked at the moment, but they eventually moved on. However, it isn't so easy for others, especially those who witnessed all this violence firsthand. They cannot simply forget, as every moment they are horrified by their experiences.

Kids are taught from an early age to call the cops if they ever need help because they are supposed to keep you safe. So how are you supposed to react when you see these very people hurting you or others for simply practicing your rights?

Most people attending protests were hurt either physically and or emotionally. Either way, it is not something many can forget, no matter how badly they may wish to.

A 21-year-old activist, Cheyenne Osuala, has a similar story. During a protest in July 2020, the police wrongfully arrested her. During the process, the arresting officer even fractured one of her wrists. In a past interview, Cheyenne stated, "I still remember feeling his weight on top of me. He was so much bigger it felt like a power trip. He wanted to hurt me, I couldn't do anything."

Even though her physical damage has healed, she continues to be haunted by the memory of what happened. Despite the mental and physical damage done, Cheyenne said that she won't stop protesting and that this incident has only motivated her more to fight for what's right.

During the Black Lives Matter protests, more than 17,000 people were arrested, most of whom were subjected to excessive force. Many videos document the violence portrayed by the officers, and "among these videos were incidents where officers beat unarmed protesters in Las Vegas, fired tear gas canister into a crowd in Dallas, and pepper-sprayed peaceful protesters in Columbus, Ohio." There is also a video where a 75-year-old man was shoved on the ground, resulting in him bleeding and losing consciousness on the sidewalk. More than 300 videos of such incidents include an officer fracturing a woman's eye socket by firing a rubber bullet.

During the protest, military-grade weapons were used, such as tear gas, flash grenades, sound cannons, military-grade riot gear, and this left many protesters in a kind of pain that doesn't show up on X-rays or CT scans. The Very Well Mind states, "The trauma of seeing police officers, who are meant to be protective figures, act with militarized behaviors is impacting people in similar ways to wartime…." So people are being exposed to similar horrors that soldiers in war face, yet their resources are not even similar. According to Military One Source, "The Department of Defense provides a variety of counseling options to all active-duty, National Guard and reserve service members, survivors…." On the other hand, most people, who witness the violence happening on the streets during protests, can't afford similar services.

The Black Lives Matter was a protest against racial injustice and police brutality. Yet, instead of standing with us, the police continued to prove why marginalized communities needed protection from the police. Real heroes are people who are terrified of what might happen, but they still show up to fight against injustice. The Black Lives Matter protests will be written down in history, but the real heroes' names may soon be forgotten.