Instead of understanding that COVID regulations were implemented to ensure the safety of citizens internationally, many have contorted the true incentive and wrongfully compared it to a systematic genocide.

Isabella Folchetti
and
February 18, 2022
in
COVID-19
Image Courtesy of KTLA 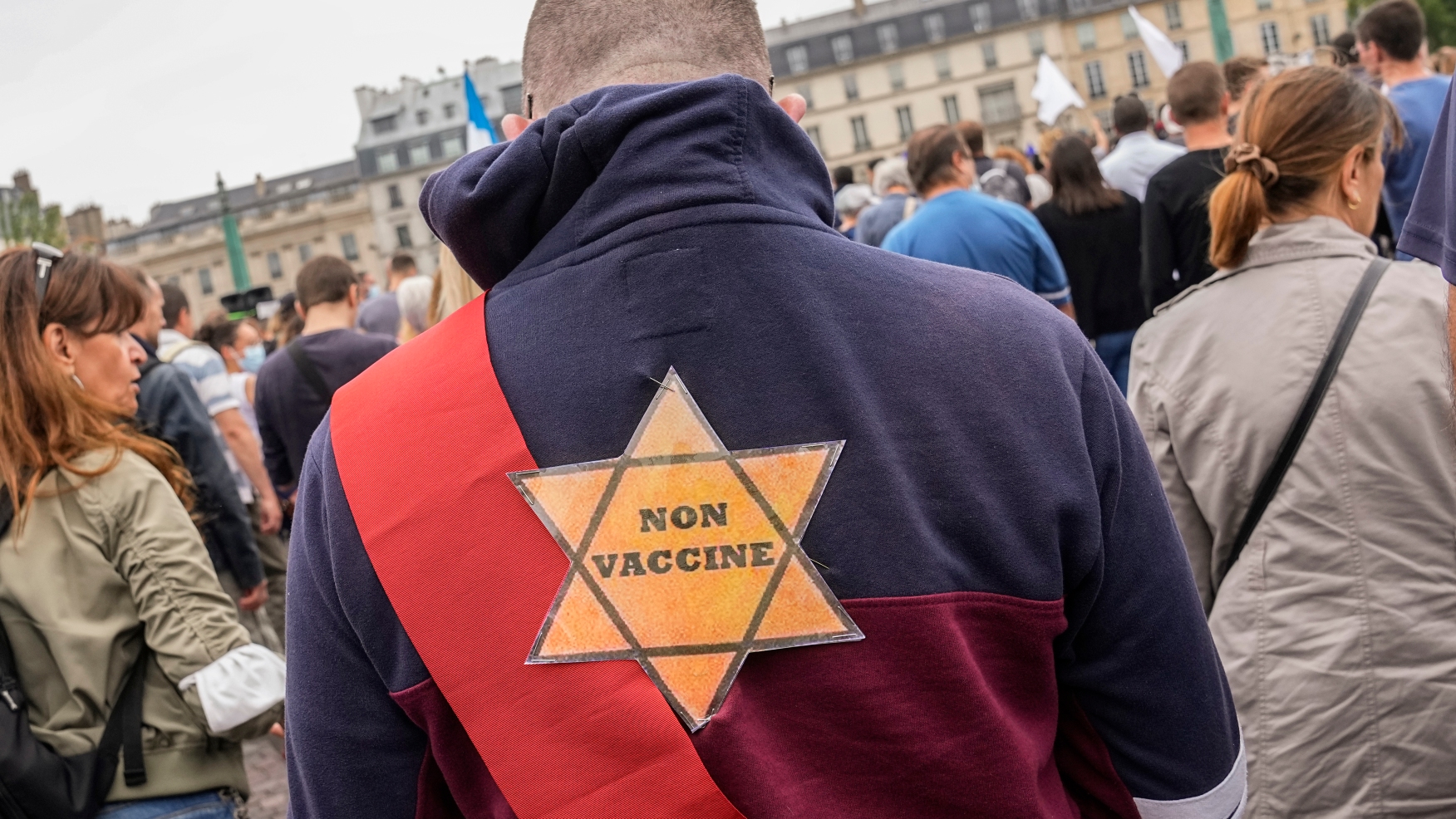 Beginning March of 2020 and spanning to the present day, the coronavirus pandemic has surged worldwide, urging citizens to abide by regulations implemented for the surety of their own safety. From at-home quarantine, to public mask-mandates, to social distancing, nations intergobally have encouraged their residents to abide by these mandates in order to halt contagion. In the more recent past, vaccinations and boosters have been distributed throughout nations, allowing for citizens to protect themselves and others from contracting the virus.

Although these safety measures and precautions have allowed for the gradual mending of a formerly wounded series of infected nations, criticism has and continues to arise in response. The “yellow star analogy” and comparison to the cruel and demoralizing nature of Nazi Germany practices have entangled themselves with COVID regulations, specifically vaccine mandates and proof of vaccination status. This reference to anti-semitism compares, on an unlevel playing field, the obligation of one American to provide proof of their vaccination, and conversely, an individual to confirm that they do not trail the Star of David on their backs. In one instance, an entire culture was demoralized and slaughtered at the feet of their religious practices, and in the other instance, an individual is suggested to provide proof of something that they willingly opted to receive, with a consequence as benign as not being able to enter a restaurant. This comparison has gained further traction in all aspects of regulations, spanning from the mentioned mask mandates and at-home quarantine order to the more recent vaccination status check. The issue with these comparisons is not the possible grievance about a simple regulation or the tarnishing of a nation’s reputation based on policies, but rather the lives, sentiments, and culture of those who endured what we are comparing these mandates to.

The Holocaust, otherwise referred to as the “Shoah,” was the mass genocide of Jewish persons residing in Europe. Having paralleled directly to World War II, Adolf Hitler, the prime minister and dictator of Nazi Germany, systematically coralled, condemned, and murdered millions of Jewish persons, with the incentive of wiping out their customs entirely. The exigence behind this genocide was the idea of racial superiority and anti-semitism; the Nazi regime boasted their “supremacy” in the wake of those they considered inferior— specifically, Jewish persons.

There was an intricate procedure with which the Nazi regime eliminated some six million Jewish persons: individuals were first identified for their Jewish or non-Jewish status. The indicator was a “badge” depicting the Star of David— as the center of the Jewish religion, this badge was used as a method of distinction prior to the Holocaust, and therefore sped up the “identification process” when it came to tearing families apart and relocating them. Some managed to disguise or detach their Star of David from their person, while others literally wore their fate on their sleeves. Following the indication (check), those who were logged as Jewish were removed from their homes and relocated into “ghettos.” These “ghettos” were Jewish neighborhoods constructed by the Nazis that literally barred them from living, working, or even stepping elsewhere. Edicts ensured the “conduct” of the Jews, limited their civil liberties, and isolated them from the deemed “superior” race. After what would be weeks, months, or even years of residence in those ghettos— some managed to reside there all along; however, their fate was seldom fortunate— Jews were grouped by the thousands and deployed to “concentration camps.” The nature of these camps was brutal: children, mothers and fathers, and other innocent civilians were forced into harsh labor, as well as inserted into close quarters where conditions were unbearable and the spread of disease raged like wildfire. Throughout these camps trailed the stench of death, both literally and figuratively. For many, death did not mean being deployed to the gas chambers, but rather falling subject to starvation, disease, or hard labor. There was no one-way route to death; however, it knocked on every doorstep and preyed upon every cooped-up victim.

It was not until 1945 that concentration camps were liberated, and the four-year long execution officially ground to a halt. But just because an event ends does not mean there is no legacy; just because you spill a glass of water does not mean that, even several towels later, droplets would not be left unaddressed awaiting a sop-up. With these leftover droplets, there is leeway for opinion and comparison. In the context of regulations implemented to mitigate the spread of coronavirus, there have been several comparisons that paralleled at-home orders to dictator-esque rule similar to that of Nazi Germany. Many United States political figures, including lawyer and activist Robert F. Kennedy, Jr., have explicitly stated that Anne Frank, a teenage victim of the Holocaust, had more freedom in hiding from the Nazis than do those subjected to vaccination policies. When called out for this radical comparison, Kennedy apologized half-heartedly, stating that his intention was “to use examples of past barbarism to show the perils from new technologies of control.” This comparison and apology— generous to call it such— not only blew the regulations and their intentions out of proportion, but also undermined the called-upon victim and millions of others who endured the same. Using the historical gore of the Holocaust as a standard for barbarism is plausible, but comparing regulations and rules that are implemented to maintain the safety of citizens to that barbarism is simply not justifiable. Freedom is not subjective; in Nazi Germany, Jewish individuals were barred from freedom. In the United States and other nations, these regulations, though strongly suggested, are not punishable if disregarded. So comparing that suffering and punishment faced on behalf of millions of Jewish individuals to the “barbaric” necessity of showing proof of vaccination status or remaining within your home to ensure the safety of yourself and others around you is small-minded.

A large aspect of this comparison to the Holocaust speaks to denial, as if the virus itself is not relevant, but rather an agent of government rule or the strict dictatorship highlighted in Nazi Germany. According to www.wgbh.org, “when COVID deniers and people who refute data-driven public health policy wrongly invoke the Holocaust, they pervert history, trivialize the memories of victims and survivors, and desensitize people to the monstrous atrocities that occurred.” Hence why it is important to understand, regardless of whether or not COVID is as relevant to one as it is to another, dramatizing and hyperbolizing a situation and comparing it to an unparalleled extreme is not only small-minded, but also invalidating to those who have endured true barbarism. Keep in mind that these individuals were punished for the Star of David that they trailed, misplaced and barred in concentration camps, and slaughtered at the feet of their own practices. They were products of the fate that they wore on their sleeves, the badge that called out their culture; the vaccination cards are something we choose to provide, and stay-at-home orders were for the sake of our safety and were completely flexible to individual circumstance. It is important, then, to distinguish those differences rather than demonize our regulations and compare them to an event that tainted the world and an entire religion for decades on end, as COVID regulations and vaccination cards key an entry to health and safety, whereas the Star of David locked those doors for millions of Jewish individuals and left them to the mercy of their perpetrators.