Amnesty International said at least eight people have been killed since the protests began.

Eshaan Mani
and
September 12, 2021
in
World
Courtesy of the New York Times 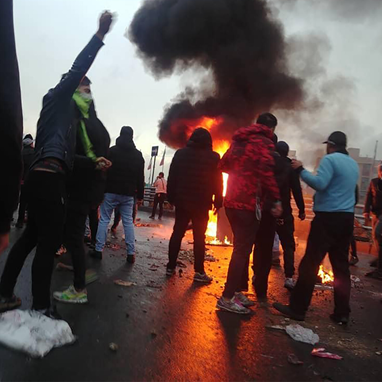 Iran is adjusting to a new president and combatting a fifth wave of the COVID-19 pandemic, a plummeting economy, and stalled nuclear talks. Now, protests are breaking out in the oil-rich Khuzestan Province and neighboring Lorestan Province due to a not-so-new crisis: a severe water shortage. A prolonged drought, summer heatwaves, seasonal sandstorms from Saudi Arabia and Iraq, as well as rising temperatures caused by climate change have been compounded by decades of mismanaged natural resources and little to no planning. This led to the water crisis ballooning into what the New York Times called “a volatile incubator of protests and violent unrest.”

“Some villagers just do not have water to drink. They have to go and get water from small puddles on the ground. It's not right for animals to drink water like this,” Ali Nazemi, an Iranian hydrologist working at Concordia University in Montreal, said. “In big cities, they’re consuming bottled water for a number of years because the water that comes from the pipes is colored and smelly.”

Demonstrators angered by the lack of water (which can lead to heatstroke or worse in the hot Persian summers) have spilled out onto the streets and are being met by security forces whose deadly response with batons, drones, tear gas, physical force, and pellet guns have fueled anger elsewhere.

“We kept shouting, ‘We want water, just water, we don’t have water,’” a 29-year-old shopkeeper from Ahvaz, the provincial capital of Khuzestan, said. “They answered us with violence and bullets.”

The protests are going viral across social media and demands for immediate relief and the resignation of local officials are growing. Some protesters have even denounced the supreme leader Ayatollah Ali Khamenei and top officials in Tehran. Speaking of Tehran, recently, protests have spread to at least two major cities outside the province: Tehran and Mashhad. One youth was shot dead and seven were wounded during these protests in Aligudarz, a town in Lorestan Province, and police blamed the attacks on “counter-revolutionaries,” leading to more outrage.

A group of dissidents, including Narges Mohammadi, a human rights activist, were beaten and detained after gathering outside the Interior Ministry in Tehran in what they described as an act of solidarity with the people of Khuzestan.

At least 102 people have been arrested in the past 10 nights in 30 cities and towns across Iran according to a dissident human rights organization. Additionally, sporadic internet slowdowns or blackouts have plagued Khuzestan for several days as the government attempts to control protests.

The protest over water has been slowly brewing for weeks, according to an Arab activist and two protesters in Khuzestan. Here is some context for what’s coming up: Khuzestan is home to an ethnic Arab population that has historically faced discrimination and that includes a restive separatist movement. The protesters have insisted their grievance is not tied to separatism, a claim which hinders the government’s ability to blame an outside force for the conflicts.

The protests started on July 6 when an ethnic Arab tribal sheikh named Khalifah Marwan from the village of Marvaneh went to Ahvaz with a group of farmers and ranchers from his village to complain about their growing water crisis to officials at the province’s water and electricity center.

“Look, we are not going to leave this land, you brought us floods and drought to make us migrate. We won’t leave, this is our ancestral land,” he shouted at officials.

The sheikh’s plea went viral on Instagram among ethnic Arabs, bringing to the surface a long-held belief that the central government had deliberately imposed policies that would force their displacement and change Khuzestan’s demographics. People began sharing their own stories, photos, and videos of parched farms and dehydrated water buffalo. They called for protests on social media, emphasizing a focus on the water crisis and nonviolence. And thus began the clashes we see now.

According to the New York Times, protests have flared before over water shortages in Iran. Farmers near Isfahan demonstrated over the drying of a river that had been their agricultural lifeline and environmentalists railed against the drying of a salt lake in Urmia. But this protest is different: it’s raising more worries.

Khuzestan is Iran’s economic heartland, as it sits on 80 percent of Iran’s oil and 60 percent of its gas reserves. But due to a scarcity of water, crops are not growing, and animals are dying of thirst. This could deal a fatal blow to the Iranian economy.

There’s also a new Iranian president, Ebrahim Raisi. He was instated on August 3, 2021, after a highly controversial election. The election had the lowest voter turnout in Iranian electoral history (approximately 49%) and the highest share of protest blank, lost, and invalid votes (approximately 13%), despite a declaration by Ayatollah Ali Khamenei that protest voting was considered haram (religiously forbidden). After a series of disqualifications, Raisi, known to be a disciple of Khamenei and widely acknowledged for his ruthlessness toward dissension, Raisi is the country’s former judiciary head and faces a daunting yet delicate task in his first days in office.

Khamenei and other officials have publicly stated that the protesters are not at fault.

It is hard for the government to feign shock and surprise as well, as the energy minister Reza Ardakanian warned in May that Iran’s summer was to be the driest in 50 years and that the temperatures were approaching 50 degrees Celsius (or 122 degrees Fahrenheit), saying that this would lead to cuts in electricity and a water shortage. Iran’s meteorological organization stated in June that southern and western areas of the country had suffered a 50 to 85% reduction in precipitation and a temperature increase of two to three degrees Celsius.

President Hassan Rouhani said in a televised speech on Thursday that Iranians have “the right to speak, express themselves, protest and even take to the streets, within the framework of the regulations”. Khamenei added on Friday in his first mention of the weeklong protests that officials must act. “The people showed their displeasure … but we cannot really blame the people and their issues must be taken care of.”

Their response has fit a repetitive and familiar pattern: suppression through violence even as officials endorse free speech within regulations.

“The [Iranian] system is in crisis management,” said Kaveh Madani, a climate scientist. “Jumping from one crisis to the other and putting a Band-Aid on each and hoping it won’t come back soon.”

Let’s hope for a more permanent solution, where we’re creating solutions instead of bandaging problems up.