Voter Intimidation: What Is It and Why Does It Matter?

With heightened fears about the security of this year's election, increased voter intimidation threatens our most fundamental right to vote

Delali Bruce
and
October 25, 2020
in
Politics
Courtesy of Business Insider 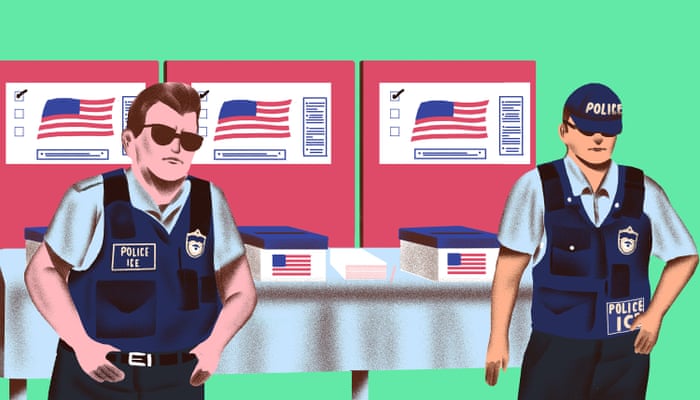 During the first presidential debate, in response to a question about ensuring a safe and secure election, President Trump told his supporters “to go into the polls and watch very carefully”. This comment was preceded by a general continued expression of concern for the legitimacy of the mail-in ballot process. This particular quote, directed with the intention of galvanizing his supporters, prompted an important conversation around the issue of voter suppression, but more specifically, voter intimidation. It is crucial to understand what voter intimidation is so that you can be equipped with the knowledge and capability to respond if you or others around you are targeted while voting.

Voter intimidation is pretty self explanatory: intimidation of any form towards a voter. Any form of voter intimidation is a federal crime. More specifically, as stated by the United States Code, it is against the law to “intimidate[s], threaten[s], coerce[s], or attempt[s] to intimidate, threaten, or coerce, any other person for the purpose of interfering with the right of such other person to vote or to vote as he may choose.” Engaging in voter intimidation may result in either a fine or imprisonment for less than a year. Some examples of intimidation include physically obstructing a polling location, shouting at people in line to vote, directly harassing voters, or aggressive questioning of voters. As the Campaign Legal Center mentions with Covid-19 in particular, it is also a felony to mislead voters by presenting false concerns or laws related to the coronavirus in an effort to discourage them from voting.

Voter intimidation appears to be an extremely legitimate concern ahead of this year’s election as already at an early voting site in Virginia, voters were met with “chanting Trump supporters” outside of their polling location. While they did not block individuals from accessing the building, some voters mentioned feeling intimidated by their presence.

It is important, however, to acknowledge the distinction between voter intimidation and registered poll watchers. Registered poll watchers, enlisted and assigned by political parties, are legally allowed to sit outside of polling locations to monitor the voting process as long as they do not directly approach or disturb voters. Under this umbrella, it is also important to note that the Republican National Convention has stated that they plan to recruit around 50,000 people to be poll watchers for this year's election.

The issue of voter intimidation pertains to people who are not registered poll watchers and interfere with what should be a completely safe and fair voting process.

Voter intimidation is not a new issue, in fact, it carries much historical significance. Prior to the late 20th century, voter suppression occurred in the form of poll taxes and literacy tests. Poll taxes and literacy tests were nationally outlawed with the passing of the Voting Rights Act of 1965 and the National Voter Registration Act of 1993, both of which were partially introduced in order to prevent voter suppression. However, in the place of direct suppression, voter intimidation has become all too common.

All of this information is not meant to frighten or worry you but rather to inform, equip, and allow you to exercise your right to vote. At the end of the day, voter suppression and intimidation is an attempt to suppress the vote of certain Americans. As the Virginia Attorney General, Mark Herring, stated in response to the news concerning the incident with Trump supporters outside of a polling station, “Voting is a fundamental right. It is the foundation of our democracy, and no Virginian [American] should ever feel for their safety or feel intimidated when they exercise their right to vote.” Your voice and your vote matter.