Tanishka Shah
and
January 28, 2021
in
Activism
Courtesy of Stanford News 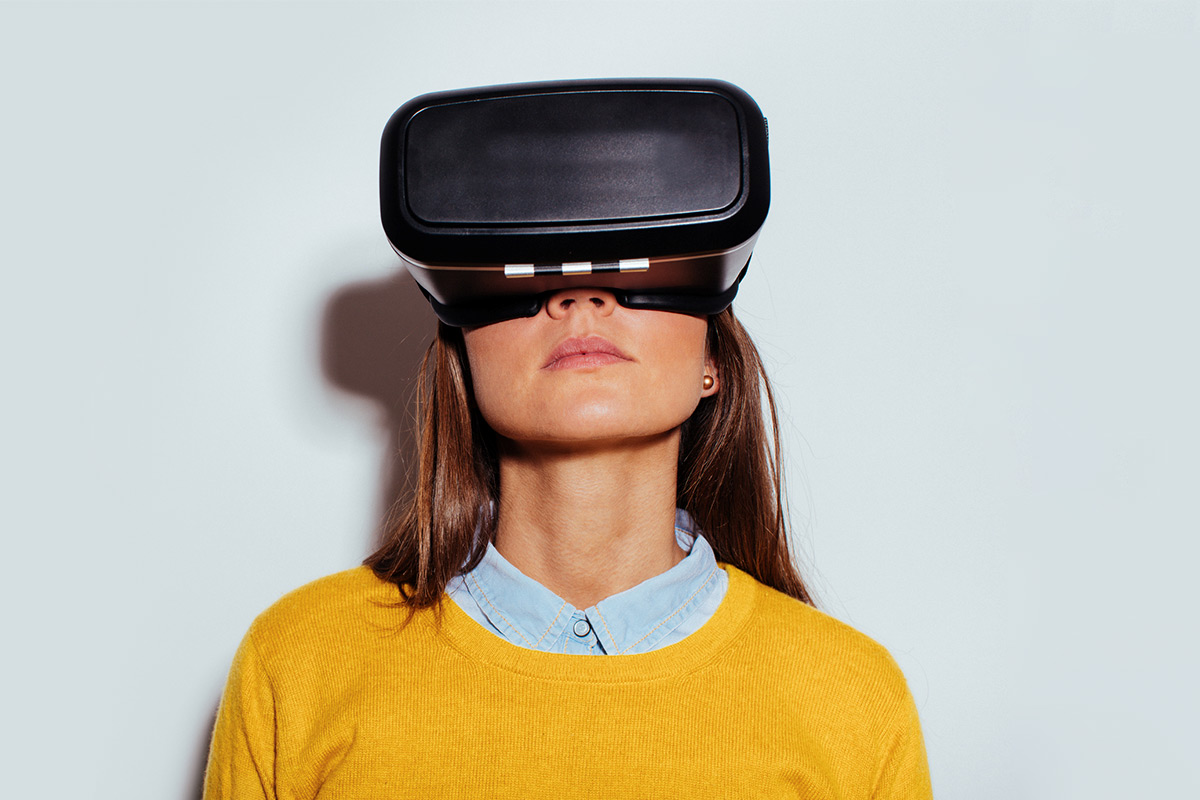 In the field of psychology, “stereotype threat” is a phenomenon where people unintentionally fulfill negative stereotypes regarding groups they belong to. Over recent years, this phenomenon has become a prime focus of many observational studies. As stereotype threats are deep-rooted concerns, they can only be eradicated by a change in the “perpetrator”’s perception and ideas, which can be a goal challenging to achieve.

However, within the coming years, virtual reality could be a major factor in eliminating prevalent societal stereotypes. New studies have found that VR immersion can be used to help people view things from the perspective of a minority- it’s currently the best representation of quite literally being in someone else’s shoes. Such a use of this technology could help people see past their own experiences. And as we know, experiences have a much stronger impact than simply hearing from someone. But how can virtual reality alter one’s perspective and help them experience something they never could in real life? The answer is “Proteus Effect.”

The Proteus Effect is the proclivity of people to be affected by their digital representations, such as with virtual avatars, dating site profiles, and social networking personas. Typically, it is observed that people’s behaviors shift in accordance with their digital representations. Research suggests that, surprisingly, the effect extends into the individual's real world. A study at Stanford University's Virtual Human Interaction Lab found that players who were assigned superhero avatars in an immersive virtual reality game were more likely to be helpful to others afterward. Other studies have confirmed similar results in various other contexts.

The feasibility of the Proteus Effect for therapeutic applications including behavioral modification, phobia desensitization, and personal empowerment, among others still being explored. Numerous professors and experts are currently studying how this effect could be used for dealing with negative stereotypes as well.

According to a study at Penn State, biases based on appearance and gender in the real world persist even in the virtual world. According to Franklin Waddell, the graduate student working on the project, “It doesn’t matter if you have an ugly avatar or not, if you’re a man, you’ll still receive about the same amount of help, [but] if you are a woman and operate an unattractive avatar, you will receive significantly less help.”

Dr. Jeremy Bailenson, a Professor in the Department of Communication at Stanford University deals with research in “digital human representation, especially in the context of immersive virtual reality.” For several years, he has researched how Virtual Reality can help facilitate change in a person’s perceptions of others. For example, in an academic paper he co-published, “Walk a Mile in Digital Shoes”, Dr. Bailenson describes an intervention method called Perspective Taking. It deals with how people see themselves vs. others during social interactions. When judging ourselves, we tend to rely on outside forces to justify our actions which is not the case when judging others. Keeping that in mind, research has shown that when asked to take on the perspective of the person we’re judging, in a virtual setting, we tend to give them the same benefit of doubt we’d give ourselves.

Dr. Bailenson has also worked on multiple Virtual Reality experiments dealing with a person’s negative stereotypes, but none of his studies found “the answer” to today’s ills, given their level of complexity. Yet, he was able to encourage a decrease in prejudiced thinking using different virtual programs. A key finding was the body transfer effect, where a subject is made to believe they are the person seen in a ‘mirror’, a virtual screen seen through a virtual reality headset, with a diversity training software called the Minority Mirror. The software places people in the bodies of different minorities and in some cases, genders. All of a sudden, a white female can be placed into the virtual avatar of a Black male. In the program, after the new user avatar is revealed, another avatar comes up to the person and starts saying negative things about the participant’s race (that of which he or she sees in the mirror). Interestingly, years of research revealed that the persons wearing the headset showed more empathy for the targeted demographic after coming in contact with the hateful avatar in the real world.

Then there’s also Courtney D. Cogburn, an Assistant Professor at Columbia University’s School of Social Work. Dr. Cogburn partnered with Dr. Bailenson on a project called “Examining Racism with Virtual Reality”. The idea was to use an immersive Virtual Reality experience allowing participants to embody a person of color. Dr. Cogburn explained how she was trying to challenge the way people talked about or measured racism through her research. “We tend to talk about racism as things we do to each other on the basis of race,” Dr. Cogburn explained. “You know, being called a name, someone being followed in a store, or being directly harassed by a police officer. [Dr. Bailenson and I] are trying to build on work that indicates that racism is actually much more complex and nuanced than those types of experiences…[Like] being praised for being articulate or someone being surprised that you didn’t come from a single parent home or whatever stereotypes that might sneak their way into discourse in interactions.”

Dr. Cogburn and Bailenson were also interested in how they could expose people to understanding the structural nature of racism. They believed it is vital to “understand the patterns of discrimination, policy and legislation that systematically disadvantages groups of people…if we hope to do anything about the effects that racism has on people’s lives.” Unfortunately, something like that seems almost impossible. It can be difficult to get people to listen when dealing with a single incident, let alone something more systemic.

A recent study at Penn State put participants with different skin tones in Virtual Reality, then they had them take an implicit association test (IAT) which provided a quantitative measure of their subconscious’ implicit biases. In previous studies “[i]mplicit association tests have … revealed white people tend to dehumanize black faces.” However, when placed in the Virtual Reality experiment, “white women who spent time in black bodies came out with a more positive IAT score.” The study revealed that subconscious biases can be manipulated and changed using virtual reality.

Another set of researchers used Virtual Reality to help people slip into the skin of an avatar and temporarily take on a new identity, cultivating cross-racial empathy along the way. The study used various optical illusions and technology to trick the brain into thinking the body is something that it's not. First, the researchers performed the "rubber hand illusion," in which they stroked a dark-colored dummy hand in sync with a white participant's real hand, which was hidden from sight. Participants scored higher for egalitarianism on an IAT after the experiment, compared to beforehand.

In the second experiment, called the "enfacement illusion," each test subject was stroked on the face by a cotton swab as they watched a video of someone of a different race having their face stroked at the exact same time. After this experience, participants tended to rate their counterpart's face as more attractive and physically similar to their own. They also said they would be more likely to share the person's opinions.

In the final exercise, participants underwent a full-body transformation in virtual reality. They wore wide-angle, high-resolution head-mounted Virtual Reality displays and motion-capture suits for tracking their bodies in real-time, in order to create an immersive experience. Each test subject could see their own hands in the virtual world, as well as a reflection of their avatar body, in pale, dark, or purple shades. White participants who spent time in black bodies came out with a more positive IAT score. However, participants who slipped into pale or purple skin didn't score any higher after their Virtual Reality experience.

Manos Tsakiris, a professor of psychology at the University of London, says the results of these three experiments are astounding as it shows that a person's sense of self isn't as rigid as once believed. When our own identities are malleable, it blurs the lines between “in-groups” and “out-groups,” he says, changing the way we react to people who look different from us.

It is also believed that virtual body-swapping could be incorporated into job training for people who need to be sensitive to diverse groups, like policemen. Participants could experience themselves being in the racial minority walking down the street in virtual reality and being stopped by white policemen and just experience how that feels.

Thus, it appears that in some cases, Virtual Reality can really help change the way our brains categorize people. While it wouldn't be the first time Virtual Reality is being used as a psychological tool, virtual prejudice therapy isn't ready for the real world yet.

One should be aware that there are certain cases in which Virtual Reality can reinforce biases. Nick Yee, a research scientist who studies gamer behavior at Ubisoft, cautions that simply placing a person into another's body isn't enough to guarantee empathy. The social context of the simulation could, at times, even create a backlash against certain groups and reinforce stereotypes. In a study from 2009, white participants who underwent a job interview simulation in black avatars had more negative racial perceptions after the experience. Another researcher found that when men roleplay online in female bodies, they tend to conform to gender stereotypes.

It’s essential to be able to share when we are in trouble. Shining a virtual light on certain issues can educate people, potentially bringing about change, while more immediately provide vocal aid to those who may be suffering. Having the ability to put people in others’ shoes is great- however, developers must be careful not to over-generalize scenarios, countries, groups of people, or anything of the sort. Virtual reality isn't a solution to racism, but it could soon become an important tool for understanding how we can change our social interactions and relationships for the better.