Uganda's Kill-All-Gays Bill is Back

Hundreds of LGBTQ+ Ugandans have been forced to flee the country, and many more are expected to follow should this bill be passed. 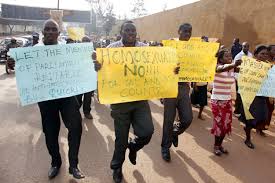 After its nullification five years ago, the “Kill All Gays” law in Uganda has resurfaced. Its primary proposition? To inflict the death penalty on already-criminalized homosexual relationships.

Simon Lokodo, Minister of State for Ethics & Integrity in Uganda, believes this law will deter younger generations from believing homosexuality is natural and “would curb a rise in ‘unnatural sex’ in the East African nation,” according to Nita Bhalla from the Thomson Reuters Foundation. The law is set to appear in front of Parliament within the coming weeks. While Mr. Lokodo seems optimistic that the bill will be passed, other LGBTQ+ activists have hope that the bill will be rejected. Edwin Sesange of the African Equality Foundation claims the bill is only being used as a form of propaganda for the upcoming 2021 elections in Uganda, believing that the bill only resurfaced to create opposition against more left-leaning candidates in Uganda.

Regardless of whether or not the bill is set to pass, activists and LGBTQ+ citizens are concerned about the rise in anti-gay hate crimes. Already, three gay men and one transgender woman this year alone have died because of homophobia and transphobia, while many more have fallen victim to other atrocious acts of violence across the country. Hundreds of LGBTQ+ Ugandans have been forced to flee the country, and many more are expected to follow should this bill be passed.

Unfortunately, this bill is only one glaring example of the persisting discrimination against queer individuals across the globe. There are currently over 70 countries where gay marriage is illegal, around twelve of which execute individuals for simply loving who they love. While great strides have been made in the rights of the LGBTQ+ community, including the increased visibility of LGBTQ+ individuals in TV shows, movies, and other mainstream media, we as a society still have so far to go and so much to do. According to Kristina Mastropasqua, a Public Affairs Specialist at the US Department of Justice, this community remains a target for “religious extremists, paramilitary groups, and extreme nationalists, and also risk being ostracized by their families and communities.” Even in countries where same-sex marriage is legal, people are still denied human rights like healthcare and job opportunities based on their sexual orientation or gender identity. Even America, a country widely considered as “liberal” by much of the world, recently proposed a bill that allows people to deny queer individuals healthcare, housing, and other necessities on the basis of religious or moral beliefs. This opens the door to further discrimination against gay and trans people in America. Already in 2019, America has seen the murders of at least 21 transgender or gender non-conforming peoples. Legalizing gay marriage in a country, while crucial, is not the cure for LGBTQ+ discrimination.

The fact that such a significant portion of the world still experiences these kinds of injustices only affirms how important advocacy and publicity are for the LGBTQ+ community. Simply educating the general public about the topic will help erase the stigma that they suffer. Eliminating blind ignorance and instilling empathy in those who may not immediately identify with the cause is an important step in advocacy. We must continue to support movements and initiatives happening around the world to help this vibrant community flourish.

Just because acceptance and tolerance generally seem to be increasing in select countries, members of the queer community still experience numerous injustices on a global scale. We must sustain our fight for justice until all of our LBGTQ+ brothers, sisters, and siblings can achieve acceptance and love across the globe.