Though America’s longest war is finally over, there remain millions of civilians facing active threats, waiting for aid and rescue, and are in grave danger.

Anushka Sonawala
and
September 13, 2021
in
World
Courtesy of the AP 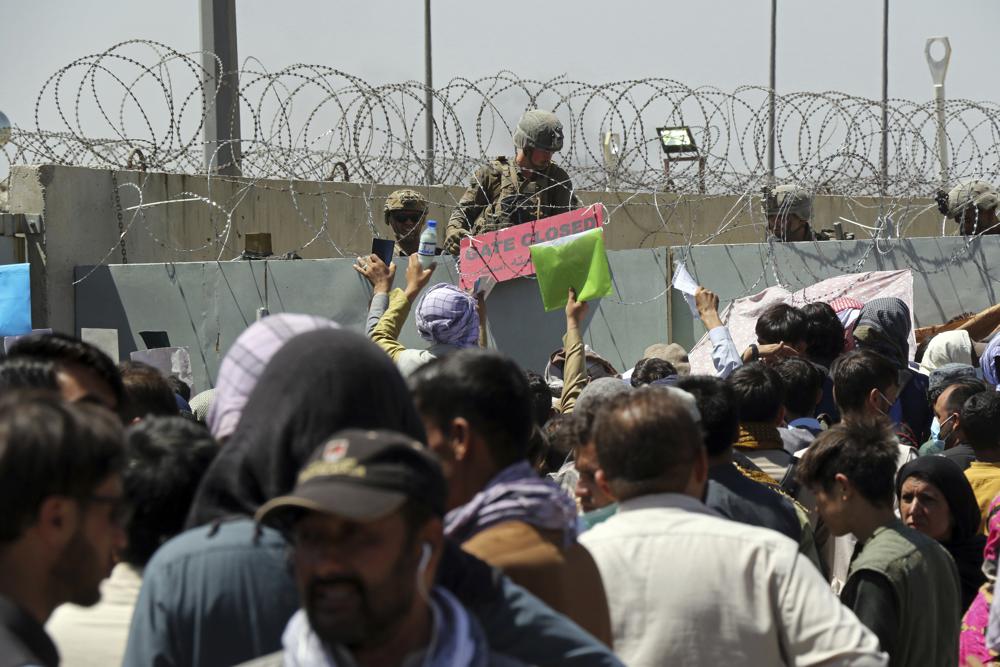 President Biden pulled the United States’ forces out from Afghanistan in July, which immediately cracked open a lid to extreme havoc and disarray in Afghanistan. Though America’s longest war is finally over as of August 30th, there remain millions of civilians facing active threats, waiting for aid and rescue, and are in grave danger.

Thousands of civilians have been desperately crowding Kabul’s airport in Afghanistan, clinging on to planes, sitting tightly on flights without their belongings, and are relentlessly trying their best to flee the country. As unprecedented events are unfolding in Afghanistan every hour, civilian casualties are reaching unmatched levels – all amidst a deadly and unpredictable pandemic. The Taliban’s perilously rapid return has left millions feeling threatened and helpless as they force inhabitants of Afghanistan to immediately evacuate their homes. As of August 24th, the U.S. has evacuated approximately 40,000 people from Afghanistan; however, 18 million Afghan residents are in need of aid. Though the future of the situation seems erratic, it’s critical that a majority of our world’s populace informs itself of the deep history behind this turn of events.

To get to the root of this issue, we need to understand the cause of the United States’ intervention, and where it all began:

Why did the U.S. get involved?

Afghanistan became a serious concern to U.S. foreign policy after the terrorist group Al Qaeda’s 9/11 attack in 2001, which received support from the Taliban. As soon as the airplanes crashed into the Twin Towers on September 11th, the course of millions of lives would be altered, and this event would mark the beginning of the United States’ intervention in Afghanistan and the Taliban’s relations with Al Qaeda. The United States Military and other American allied troops were sent to Afghanistan to remove the Taliban and amputate Al Qaeda’s power. Though the combat operation the U.S. launched in 2001 originally seemed like a strategic success, it was followed by several casualties of U.S military personnel and has been mishandled as different past presidents have suggested the removal of U.S. troops from Afghanistan. What was initially a proposal to secure the United States’ foreign policy and Afghan residents’ rights overextended into a two-decade-long crisis pervaded with confusion and unanticipated danger.

Why did the U.S. finally withdraw itself?

While the United States’ withdrawal seems hasty and unplanned, discussion of the country’s withdrawal began in 2009 during Obama’s presidency. Then-Vice President Biden had continuously opposed a withdrawal of troops and forces from Afghanistan during debates over the future of U.S. involvement in Afghanistan. Evidently, by the end of Obama’s terms of presidency, he did not withdraw U.S. troops from Afghanistan.

Former President Donald Trump had also publicly declared his intentions to work towards an extraction of U.S. troops from Afghanistan – and this might be one of the only actions both Trump and Biden had affirmatively agreed on, despite a difference in numerous underlying procedures and plans. The Trump Administration’s deal with the Taliban was to extract NATO and U.S forces from Afghanistan within 14 months after February of 2020 in exchange for a ceasefire and a reduction of violence from the Taliban. This meant that the Taliban would be required to ensure that Afghanistan would not become what The Washington Post called “a haven for terrorists.”

This deal occasioned several other agreements between the U.S and the Taliban; however, critics argued that it did not guarantee sufficient compromise from the Taliban. Trump’s second national security adviser, H.R. McMaster, called the agreement “a surrender agreement with the Taliban.” Nevertheless, in early April of 2021, Biden announced that the U.S. would be removing its military troops from Afghanistan.

Although Biden scrutinized the legitimacy of the deal and its consequences, he conformed to some of its entailments and integrated it with his exit plan. Committed to ending the U.S. Military’s role in Afghanistan, Biden laid out a plan with strategies to efficiently move out U.S. Troops from Afghanistan. Unfortunately, intelligence companies and the Biden Administration had not predicted such an immediate and prompt involvement of the Taliban while ideating and declaring the withdrawal proposal, thus, at the time, this drawdown plan seemed comprehensive. Simply put, Biden thought that it was the right time to begin pulling out of Afghanistan despite the painful repercussions that would follow. However, throughout August, threats towards women, displaced individuals, and civilians quickly unraveled.

Biden’s Response – Are We Happy?

The Talibs’ brutal and ruthless invasion into Afghan land through means of violence and power has left millions feeling threatened and vulnerable to unimaginable chaos. Since the dramatic political shift in Afghanistan, evacuees have frantically been trying to flee the country. It was after the videos of Afghan inhabitants gripping onto an outgoing U.S. airplane went viral, that the issue began gathering more attention. Journalists intently questioned Biden about the consequences of his actions and the result of the disorganized drawdown. In his response, he called the situation “gut-wrenching,” but did not hold himself accountable for the messy crisis that followed the withdrawal. Biden also made some address speeches about this catastrophe, but his discussion of the matter disappointed many. On August 16th, during his national address, President Biden defended his administration’s actions and acknowledged that such quick involvement from the Taliban was unexpected: "as we carry out this departure, we have made it clear to the Taliban: If they attack our personnel or disrupt our operation, the U.S. presence will be swift and the response will be swift and forceful. We will defend our people with devastating force if necessary...” I stand squarely behind my decision. After 20 years, I've learned the hard way that there was never a good time to withdraw U.S. forces."

While the Biden Administration has acknowledged the brutal consequences of the U.S.’s sudden withdrawal, they are failing to publicly acknowledge its consequences. In an interview journalist Jake Tapper conducted with Secretary of State Antony Blinken on CNN, Blinken said that staying in Afghanistan would have had extreme ramifications such as further threats of elongated war for the U.S. and he described these ramifications as “unsustainable”. Jake Tapper responded to Blinken’s comments by saying, “You keep changing the subject to whether or not we (the U.S.) should be there forever, and I’m not talking about that. I’m talking about whether or not this exit was done properly – whether taking out all the service members before those Americans and those Afghan translators could get out was right.” In response, Blinken claimed that the Biden Administration was prepared for every contingency, but as this crisis continues to advance and exacerbate, Blinken’s response to Tapper is inadequate.

Are women in danger?

Undoubtedly. Under the control of the Taliban, women will not be allowed to leave their homes without their male counterparts, and are being denied the right to education. Under the Taliban rule, girls as young as 12 years old will be forced into marital lives and sexual servitude. Violation of these restrictive rules could lead to severe punishment. Activist Malala Yousafzai apprehensively mentioned, “I am deeply worried about women, minorities, and human rights advocates. Global, regional, and local powers must call for an immediate ceasefire, provide urgent humanitarian aid, and protect refugees and civilians.” Moreover, in an interview with The New York Times, activist Crystal Bayat claimed that all progress women have made in the last 20 years will be erased once the Taliban gains complete power.

The Taliban has publicly reassured women of their rights in their speeches, however with the Sharia law and the Taliban’s plans of executing it, this promise does not suffice. The Sharia system is Islam’s legal ruling framework and serves as a code of conduct for Muslims. The Sharia law’s implications can be interpreted in several ways, and the Taliban chooses to abide by it in restrictive controlling ways. Between 1996 and 2001, women were confined to their homes, barred from going to work and school, and were denied their basic rights to autonomy. The Taliban’s expectations of what the law must necessitate makes the Taliban’s promise questionable.

The Role of Healthcare in this Catastrophe

In light of this recent catastrophe, the International Committee of Red Cross declared that “Afghanistan is among the deadliest places in the world to be a civilian.”

Decades of violence, disarray, and extreme havoc have damaged healthcare facilities, an issue that’s been exacerbated by COVID-19. The pandemic, hunger, climate change, and other factors are putting Afghan civilians’ fundamental needs in grave danger. NPR reports that Afghanistan currently lacks testing supplies and facilities to detect the presence of the new variant in the region.

Two attacks launched by suicide bombers and numerous armed gunmen of ISIS-Khorasan killed 13 U.S. soldiers and at least 174 other civilians. The U.S. Centcom Commander has warned Americans and Afghans about active threats that could be executed in the near future by the Taliban. After the tragic and devastating bombing, President Biden stated that “we will respond with force and precision, at our time, at the place we choose, and at the moment of our choosing."

According to the United Nations, 330,000 Afghans have been displaced this year. 30,000 Afghans are fleeing Afghanistan every week. According to the International Rescue Committee, about 18 million Afghans are in need of humanitarian assistance. The U.S. Special Inspector General for Afghanistan Reconstruction recently declared that 2,443 U.S. military members are dead – only as of July and August of 2021.