Kendall Carll
and
March 1, 2021
in
Politics
Courtesy of NBC News 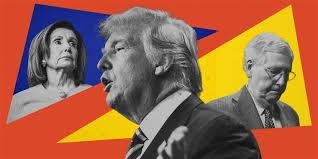 Former president Donald Trump faced his Senate trial on February 9th after his second impeachment following the raid on the Capitol in early January. Four days later, Trump was acquitted on a 57-34 vote, falling 10 short of the 67 needed to secure a conviction.

The proceedings themselves almost failed to go through as Republican Senators questioned the constitutionality of an impeachment trial for a president no longer in office. On the first day of proceedings, Trump’s attorneys forced a vote over the constitutionality of the proceedings after asserting that “holding an impeachment trial of a former president is unconstitutional.” While 6 GOP Senators joined all 50 Democrats in support of the trial, winning the vote 56-44, the proceedings served as an early sign of Trump’s eventual acquittal. The Democrats would need 17 Republicans to join their ranks in the final vote to convict the former president, but only 6 felt the trial was even constitutional.

With the procedural vote concluded, Trump now faced one article of impeachment for “incitement of insurrection” for which he was impeached by the House on January 13th. Trump’s team of lawyers consisted of a trio with criminal defense experience: Bruce Castor, David Schoen, and Michael van der Veen. Trump initially hired a team of 5 lawyers to be led by Butch Bowers and Deborah Barbier, but they left the former president’s defense just two weeks before the proceedings. In contrast to his star-studded army of attorneys that defended him in his first trial, Trump’s legal team for the unprecedented trial was “much smaller and… thrown together in haste days before the trial kicked off.”

The vast majority of Trump’s short three-hour defense was spent accusing Democrats of “constitutional cancellation culture” and arguing that the trial violated Trump’s First Amendment rights. A substantial strategy of Trump’s defense was to combat the House’s use of video from January 6 by presenting an array of short films featuring Sen. Elizabeth Warren (D-MA) saying the word “fight,” Democrats and celebrities speaking out against Trump, and “an extended… cut of Trump’s infamous ‘very fine people’ comment” that put white supremacists on a pedestal during the Charlottesville rallies in 2017.

In the final 40 minutes of the team’s presentation, Bruce Castor, who had become the lead defense attorney, attempted to address and rebut the case made by the House. The arguments made by Mr. Castor attempted to remind the Senate of Trump’s love for law and order which he “wore on his sleeve every single day” and demonstrate that all politicians rally supporters to “fight” – still failing to explain why Trump supporters were the only ones to act on that command.

This lacking and rather short defense followed the two-day case presented by House managers. Emotionally charged, the House presented jarring videos of the raid and clips of bipartisan condemnation of the violence. Though they had won the vote on the constitutionality of the election, Democrats still had to convince their Republican colleagues that there is something to be gained from a successful conviction: barring Trump holding public office in the future. In addressing Republican claims that the trial was an attack on the former president, House managers “emphasized that the trial was aimed not at punishment but prevention.”

Despite this strategy of the House managers and the early victory in the procedural vote, the question of both the constitutionality and the point of the trial remained a sticking point for Republicans. While Trump’s team was less effective in rebutting the actuality of the House case, they were consistent in their questioning of the merit of the trial. Given the slim margin of victory in the constitutionality vote, the defense only had to convince Republican senators that the result of the trial would have no substantial impact and was merely an act of political spite.

Indeed, Trump’s lawyers made sure to remind the GOP of the political ramifications of their vote in the trial. Bruce Castor was clear in saying that if Republicans were to follow the evidence and vote for conviction, then the political consequences would be severe; addressing the GOP, Castor said, “now nobody in this chamber is anxious to have a primary challenge.”

Evidently, Republicans were more concerned with their political popularity than the safety of the country. Senate Minority Leader Mitch McConnell (R-Ky.) said, “the people who started [the Capitol riot] believed they were acting on the wishes and instructions of their president” and that “there’s no question… that President Trump [was] practically and morally responsible for provoking the events of the day.” Nonetheless, McConnell voted to acquit Donald Trump.

While the Senate did not convict Trump in the impeachment trial, Democrats are far from done with their prosecution. House Speaker Nancy Pelosi (D-Calif.) says the House is establishing a 9/11-style commission to investigate what led to the storming of the Capitol. Independently, Rep. Bennie Thompson (D-Ms.) filed a federal lawsuit, in his private capacity, accusing Donald Trump of inciting the daily insurrection. The lawsuit seeks “unspecified punitive and compensatory damages” from Trump and names the former president’s former personal lawyer Rudy Giuliani and extremist organizations like the Proud Boys and Oath Keepers. While Thompson is the first member of Congress to file a suit, he likely will not be the last.

Unless the House commission’s investigation yields a felony conviction, the former president will be eligible to run for office in 2024 – what remains to be seen is if he will. As of now, Trump “won’t say yet” if he will try to make a comeback in 2024. Whether as a presidential candidate, a candidate for another public office, or as a pundit for the GOP, Trump has promised he will “be back in some form.” Without a doubt, recent Democrat victories against the former president are immense, but the pursuit to bring Donald Trump to justice has far from ended.