Transphobic Comments from Ben Carson Are Nothing New

Carson’s list of comments on the LGBTQ+ community range from dismissive to inexcusably ignorant. 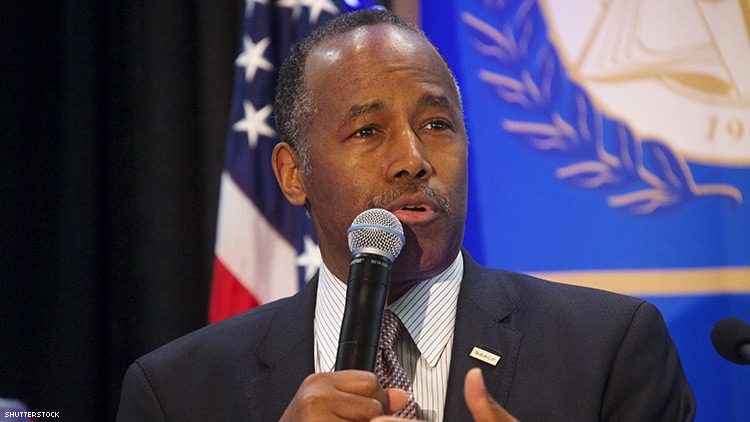 Ben Carson’s history of transphobic comments continued last month at a meeting with Housing and Urban Development (HUD) staffers. During the meeting, Carson, the HUD Secretary, reportedly referred to transgender women as “big hairy men” and stated his concern about transgender women entering homeless women’s shelters. An HUD official not present at the meeting claimed that Carson was actually referring to men pretending to be women to gain access to homeless shelters, insisting that “the Secretary does not use derogatory language to refer to transgendered individuals. Any reporting to the contrary is false.”

But many would be more inclined to believe this statement if Carson did not have a long history of anti-transgender remarks.

Carson’s list of comments on the LGBTQ+ community range from dismissive to inexcusably ignorant. In 2015, Carson claimed that homosexuality was a choice — a belief that, while disproved by science, continues to circulate. Carson later apologized for this remark. The same year, Carson demonstrated opposition to transgender individuals serving in the military, saying that the military was not a social experiment and that they should “deal with the transgender thing somewhere else.”

On television, Carson’s opposition to transgenderism became very clear: “Boys who say, ‘I feel like a girl today, I want to go into the girl’s lavatory’ — that is such a bunch of garbage. If we continue to cater to that, where will it lead?” And on a Fox News segment with Tucker Carlson, Carson compared changing gender to changing ethnicity. “If I wake up tomorrow and I feel like I’m Chinese, it doesn’t necessarily make me Chinese.” These comments make it evident that Carson is not entirely clear on how being transgender works.

“During a recent meeting with local staff in San Francisco, I made reference to the fact that I had heard from many women’s groups about the difficulty they were having with women’s shelters because sometimes men would claim to be women. This made many of the women feel unsafe, and one of the groups described a situation to me in which ‘big hairy men’ would come in and have to be accepted into the women’s shelter even though it made the women in the facility very uncomfortable. My point was that we have to permit policies that take into consideration the rights of everybody, including those women,” Carson wrote.

While his explanation may make his comments seem justified, it is important to remember that the HUD has repeatedly proposed or applied various laws that have harmful effects on the transgender community under Carson’s management. One proposed rule would allow federally-funded shelters to refuse transgender people to enter on religious grounds — and this proposition came exactly one day after Carson claimed that the HUD had no plans to eliminate the Obama-era Equal Access Rule, which prevented housing discrimination on the basis of gender or sexual orientation.

Several Democrats and anonymous HUD employees have sided with the transgender community in regards to Carson’s “big hairy men” comment. Kentucky Democrat Joe Kennedy tweeted that “Ben Carson shouldn’t even be given the chance to resign. He should be fired tonight.”

Both Carson’s position and his comments within the HUD signify a dangerous shift within the department. Under the Obama administration, the HUD formed numerous laws to aid the LGBTQ+ community, but under Carson’s lead, the HUD has repealed such laws. The National Center for Transgender Equality accused Carson of trying to “erase transgender people from federal regulations and legal interpretations.” Given his past comments and clear transphobia, this is probably true.

1.6 million youth are homeless, 40% of them are LGBTQ+. Ben Carson doesn’t seem to care. Instead, he and those like him continue to look to a closed, narrow-minded past, pushing forward harmful stereotypes and hurtful rhetoric.

An HUD employee put it perfectly: “Suggesting the department should adopt a policy that prioritizes someone’s discomfort over another person’s right to shelter validates bigoted ideas about transgender women and the frankly ludicrous idea that ‘big, hairy men’ pretend to be women in order to harm cisgender women.”