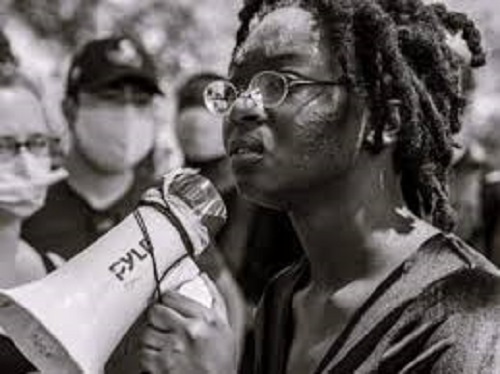 Oluwatoyin “Toyin” Salau was a 19 year old Nigerian-American Black Lives Matter activist. On June 6th, she was sexually assaulted and spoke out about it on her Twitter, in hopes of identifying her abuser. That night, she went missing for over a week until her body was found dead in Tallahassee, Florida, on Saturday, June 13, 2020, and her death was confirmed on Monday, June 15, 2020. Vicki Sims, a 75-year-old AARP volunteer, was found dead alongside her. A 49-year-old man identified as Aaron Glee Jr. admitted to murdering Oluwatoyin Salau in his home a few days before kidnapping and murdering retired Victoria Sims. While he has been charged with murder and kidnapping since, Toyin’s death is a tragic reminder that black women continue to suffer painfully at the hands of our society and will continue to do so until justice is served and those who incite this suffering are held accountable.

According to tweets from Toyin’s account on June 6th, the day she went missing, Toyin was sexually assaulted by a man who offered her a ride to a refuge church, after talking about her dire living conditions that she was trying to escape. The same week we learned Toyin’s body was found, Breonna Taylor’s killers were still free and not faced with any charges. In 2015, Sandra Bland was found hanged in her jail cell in Waller County, Texas, three days after getting arrested during a pretextual traffic stop, and it was ruled a suicide. Breonna Taylor was shot in her own apartment by a Louisville Metro police officer who entered her apartment with a no-knock search warrant on March 13, 2020. And these are just a few names; countless other black women and their experiences are silenced, unheard of, trivialized, and used against them.

With police brutality being covered so heavily nowadays in mainstream media, we hear first about black men who have been murdered. While it is a fact that far too many black men have lost their lives at the hands of the police, a lack of media coverage for instances of assaults, attacks, murders, etc. from police officers in regards to black women gives us, consumers of this media, a reason to believe it doesn’t exist. But it does, and until America acknowledges the pain black womxn face every day and abolishes the systems that allow this pain to continue, nothing will change. As Gabrielle Bellot said in an article written for The Cut, “real justice for acts of racialized police brutality has historically been slow to come, and it seems like it will take even longer for women of color.”

Black women have been victims of systemic racism that can’t be destroyed overnight, but can only deteriorate if we recognize their uniquely vulnerable position. Black women are found to be impacted by domestic violence at rates 35% higher than white women. There were 16.3 out-of-school suspensions and 1.9 in school suspensions per 100 black females enrolled compared to 1.5 and 1.9 for white females in 2014.

From civic engagement to criminal justice, trafficking to incarceration, homicide to intimate partner violence. From bail to employment, to rent and affordable housing. From childcare to predatory lending to education. From educational attainment to student loans to the school to prison pipeline to food deserts. From the beauty industry to health insurance to mental health to reproductive health… black women have not just one, but two, sharp ends of the same stick: both white supremacy and patriarchy, despite being the ones trying to dismantle these ideologies from the beginning. Women’s suffrage, civil rights, Black Lives Matter, LGBTQ+ rights… black womxn were the first to fight these fights and spark these movements. Why are they never placed at the forefront of who we need to fight for today.

To think of what Toyin went through in those last few days, all alone, after dedicating so much of her life to fighting for others. American history is one of oppression, silencing, and brutality, with black women always bearing the greatest burden of hate. Now is the time to return the favor to black women, who deserve so much better than what they’re being given right now.