If hiding behind one’s fake exterior while brooding over the struggles to stay “manly” is what masculinity entails, then the only way to classify it would be “toxic.”

Varshini Sathiyaseelan
and
January 15, 2022
in
Representation
Courtesy of The Conversation 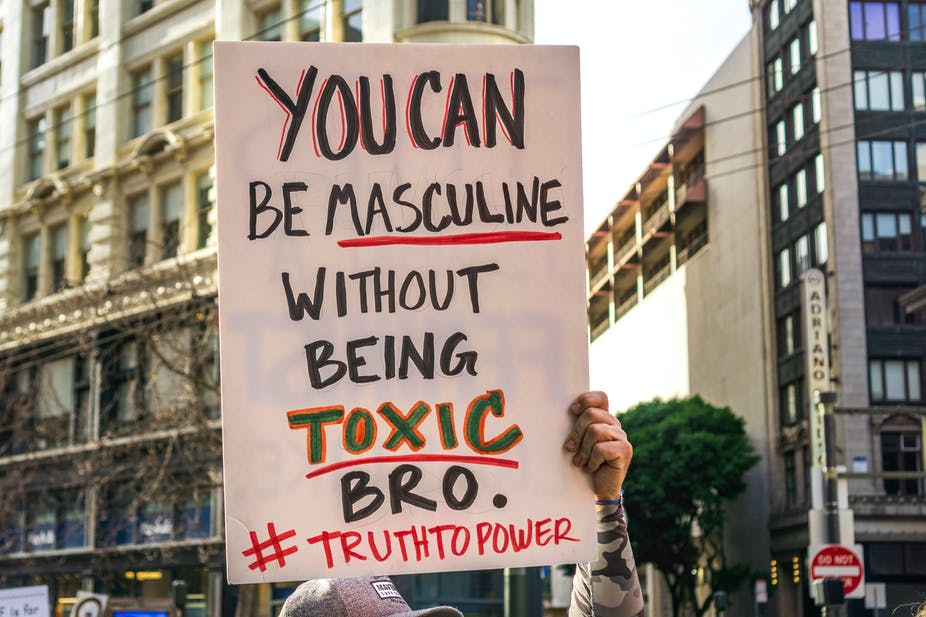 Toxic masculinity refers to a cultural concept of manliness that glorifies stoicism, strength, virility, and dominance, and that is socially maladaptive and harmful to mental health. One of the causes of toxic masculinity is that from a young age, men are taught to suppress their feelings in fear that showcasing them will “threaten their masculinity.” Because they fail to open up about their traumatic experiences and emotions, this not only can affect their mental health but can also lead to teenage males feeling depressed and suicidal.

Another way in which toxic masculinity affects teenage boys is their ability to create bonds with other people. According to the American Psychological Association (APA), both boys and men “prefer building connection through physical activities” rather than sitting down and talking about their personal lives due to their fear of being “less masculine.” This is why it is common to see teenage boys and men with only a few close friends. Although men have feelings and close friendships with other men, they rarely display this side of their lives because they feel as though these actions don’t fall into the category of “masculinity”.

A focus point of toxic masculinity is the idea that men should not openly display their emotions. This stems from the wrongful idea that men are supposed to always be strong, and showing emotions paints them as weak. This notion is distressing in various respects, creating a society wherein the fear of being mocked or disparaged pushes males to feel uncomfortable sharing their feelings. Subsequently, it has led to a large portion of males not having a healthy outlet for them to release their negative emotions, resulting in addictions and poor mental health.

Men are more likely than women to have an alcohol or drug problem, according to the National Bureau of Economic Research. This could be attributed to mental illness, which has been found to be connected to substance addiction. Both, when left untreated, can lead to worsened conditions or self-destructive behaviors such as suicide. The American Foundation for Suicide Prevention reported that, “in 2018, men died by suicide four times more often than women”.

The National Sexual Violence Research Center reports that 1 in 71 men in the United States have been raped at some time in their lives, not including unreported cases. The center also stated that more than one-quarter of male victims of rape experienced their first rape when they were 10 years of age or younger. This means that boys, who don’t yet have the tools necessary to adequately process trauma, are likely to be raped at early ages. However, it is only much later that such horrors are found, or worse, hidden away in fear of being perceived as “weak”.

American organisation 1in6 was founded in 2007 to support male sexual abuse survivors. Its name is a reminder of the stark statistic that one in six men in the US will experience sexual violence before they turn 18. Speaking to Out magazine last year, the organisation’s communications director Mr Seth Stewart underlined the need to support male survivors through their extreme reticence to speak out. “It takes men two and half times longer than women survivors to disclose,” he said. In January 2020, when a media blackout was lifted and newspapers started reporting the crimes of “Britain’s most prolific rapist”, Mr Reynhard Sinaga, what struck many was the fact that his victims were men, most of whom identified as heterosexual.

As such, it is clear that toxic masculinity indeed harms those that it “applies” to. Trying to keep up the facade, many sacrifice their expressions of emotions while compromising their own well-being and mental health. If hiding behind one’s fake exterior while brooding over the struggles to stay “manly” is what masculinity entails, then the only way to classify it would be “toxic”.