With telecommunications shut down in Tigray, the rest of the world is left largely unaware of the mass genocide ravaging the region.

Mehek Azra
and
September 12, 2021
in
World
Courtesy of the AP 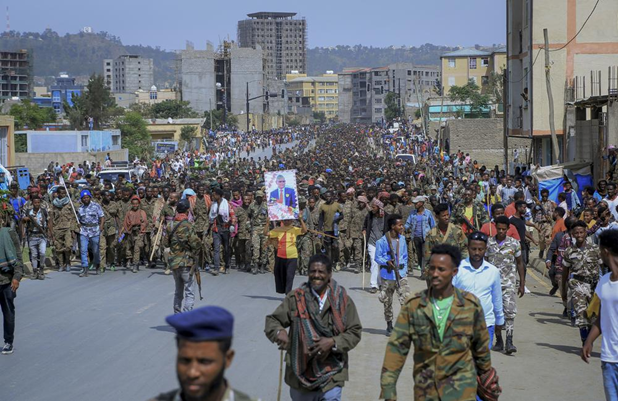 The Tigrayan conflict began in November 2020, leading to the deaths of thousands of people and leaving the rest in famine conditions. An election, political tensions, debate over who’s best fit to lead,  and an urge by Abiy to reform the Ethiopian government all increased tensions in the region, ultimately causing this genocide.

TPFL, Tigray’s People’s Liberation Front, was the leader of a four-party coalition that made Ethiopia more secure by providing protection and freedom for Tigray and trying to preserve Tigrayans’ human rights. However, Abiy Ahmed, the prime minister of Ethiopia, wanted to restructure the government due to concerns raised by Ethiopia’s government about democracy and human rights. As a result, Abiy Ahmed’s government and the political leaders of the Tigray’s authoritative party clashed in a fight for control.

Most Tigrayans were against having a single government and Abiy’s strong desire for power has caused unease among citizens. The conflict deteriorated when Tigray resisted the central government to hold its own election because they believed that Abiy wanted to elongate his rule.

This refusal to obey had infuriated Abiy, leading him to block telecommunications in late 2020 thereby veil the war mass genocide that’s ravaged Tigray throughout the past year.  Hence, the rest of the world is left largely unaware of the atrocities Tigrayans are currently facing.

As Ariam Kidane — whose family is currently in Tigray — writes, the region has suffered from massacres, looted universities, famine and rape inflicted by the Ethiopian government. Families are now becoming victims of starvation because of humanitarian aid blockages. Beyond that,  bombings by the Ethiopian government have killed thousands and forced many Tigrayans to flee to Sudan and other areas of Ethiopia.

Those who have family in Tigray have been restless, with continuous anxiety due to their inability to contact their loved ones and ensure that they’re safe. People in Tigray are also unable to access the help they need; humanitarian workers have been attacked by the Ethiopian defense forces so that they are unable to provide medical support and food to the injured. Beyond that, citizens can’t access information as to where to go and seek medical help.

For people outside of Tigray, there are a number of ways to take a step forward and help. For instance, we can contact our legislators to demand that they refer to Tigray’s situation as a genocide and urge them to pressure the Ethiopian government to allow telecommunications. We can use social media to spread awareness with  hashtags such as #TigrayGenocide, #keepiton, #speakup to encourage others to take action as well.  It’s also possible to make donations to help people in Tigray through organizations like the UN Refugee Agency.

As humans, we must take action — regardless of how big or small — to preserve the rights of the innocents in Tigray. When basic human rights are stripped away, we can’t ignore it by labelling it as an “internal conflict.”  For Tigrayans’ sake, please put your voice and advantage to use.