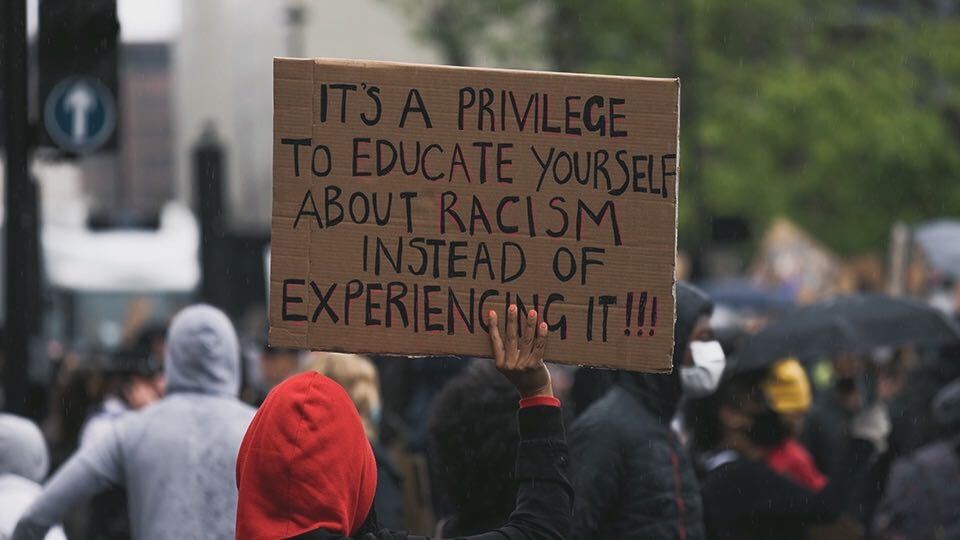 When the tragic killing of George Floyd gained national attention, support for the Black community and the Black Lives Matter movement reached unprecedented levels. Tens of thousands took to the streets in protest as the country felt the anger, grief, and resolve of everyday Americans. Upon these uprisings, media coverage of race-related issues soared, and conversation on the issue of racism grew exponentially.

Many white and other non-Black folks from across the country are asking themselves how they can be true allies, educating ourselves on the ingrained, insidious structure of systemic racism and confronting white supremacy and our own privilege. To be an ally means more than just posting a black square to your grid. Actions like those, when not followed by additional steps, barely scratch the surface of the true work that needs to be done.

For the Black community, the fight against racism is nothing new. It isn’t something that can be casted aside once media attention dies down, because for Black people, racism affects every aspect of their everyday life. The sad truth is that in the next few months, news organizations, big corporations, and the general public will lose interest. The performative allyship and self-serving social media posts will fade away and anti-racist agendas will be forgotten as easily as they were begun.

But vitally, this cannot be just about a moment; it must become a movement that continues to stand once the news cycle moves on. It is everyone’s responsibility to keep the momentum going. So far, we have only scratched the surface of the long fight to dismantle the deeply rooted, complex systems of racism within our country. It won’t be an overnight fix, but through authentic, continuous allyship and relentless pressuring of U.S. systems, progress is possible. Here are some ways you can help keep the momentum going.

The history of peaceful protests in America has revealed it to be a key part in the push for structural change. Gathering with people to collectively speak out against wrongdoings is a fundamental right and powerful way to get your voice heard. If you decide to attend a peaceful protest here are some resources to read before attending.

How to protest safely & what to bring

Amnesty International provides information on actions to take before attending protests, a guide on how to stay safe while protesting, and proper protocol if you encounter teargas.

Harper’s Bazaar provides additional information on safety precautions, and how you can protect yourself and others in the event that things turn violent.

ACLU lists your rights for organizing, attending, and documenting protests.

How to be a white ally during a protest

This source provides some notes for white people who chose to attend BLM protests.

How to find a protest near you

CNet has provided a useful resource for the best ways to find protests near you. Another really good way is to simply search up "Black Lives Matter Protest" on Facebook.

Signing petitions is one of the easiest steps you can take as an ally. Petitions, when signed in great numbers, are a powerful signal to leaders that action needs to be taken. Here are several petitions to sign and share.‍

Petitions that have not reached their goal (Updated Regularly) ‍

This source keeps an updated list of petitions that have not yet reached their goal.‍

Current Petitions as of June 28th

Ban the use of rubber bullets for crowd control

Julius Jones is innocent. Don’t let him be executed by the state of Oklahoma.

Willie Simmons has served 38 years for a $9 robbery

Dismantling racist systems on a local level is equally as important. You can search up petitions Change.org to find petitions on local issues of race.

Racism is a complex, multi-sided issue. Learning about and confronting racism and the systems behind it is the first step to overcoming it. It is important to commit to challenging your biases and acknowledging where you can learn from your mistakes. There will always be more to learn. However please know that is not the job of your Black friends and family to educate you and or walk you through their experiences. Make sure you take responsibility of your own education. There are plenty of podcasts, books, documentaries, and articles that Black people have put their thought, effort, and voices behind that can help you educate yourself. ‍

Articles published on racism by Redefy can be found through this link.
‍

Other articles compiled from Swaay:‍

Recognizing and Dismantling Your Anti-Blackness‍

George Floyd’s Death Is a Failure of Generational Leadership‍

Don’t Fall for the ‘Chaos’ Theory of the Protests‍

Talking to Kids About Racism, Early and Often‍

How Organizations Are Failing Black Workers -- And How to Do Better‍

The Price We Have Paid for Not Confronting Racism‍

Why Feeling Uncomfortable Is So Important‍

How to Actually Fix America’s Police‍

Racial Inequality, in College and in the Workplace‍

How to Avoid Racism While Traveling

While looking to buy any of these books, think about purchasing from a Black owned bookstore if there is one in your area. You can look up local stores at African American Literature Book Club’s List.

About Race with Reni Eddo-Lodge

Yo, Is This Racist?

Whether it is through social media or face to face, having conversations on race can be a difficult but important step. For many white people talking about race can be scary. Whether it be because of a fear of misspeaking or the guilt that comes with the topic of racism, white people often avoid talking about these crucial issues; however discussing racism is a crucial part combatting the systems that perpetuate it. Here are some resources on how to talk about race and how to acknowledge you implicit bias.

How to talk about race

Getting Over Your Fear of Talking About Diversity

Guide: How to Have Difficult Conversations About Race

Eight Lessons for Talking About Race, Racism, and Racial Justice

Test your implicit bias through a test developed by Harvard researchers.

Strategies to Reduce the Influence of Implicit Bias

Recognizing and Dismantling your Anti-Blackness

Donating money, if you have the ability to, is a great way to show your support. Especially during an economic crisis, Black organizations need financial support more than ever. Here are some suggested places to donate.

Black Lives Matter (extensive list on where to donate)