These Dancers Are Defying Gender and Age Norms in the NBA

The new Wizdom dance team has revolutionized the traditional image of an NBA dancer, driving out the toxic fatphobia that previously dominated NBA culture.

Shreya Joshi
and
December 21, 2019
in
Representation
Courtesy of AARP 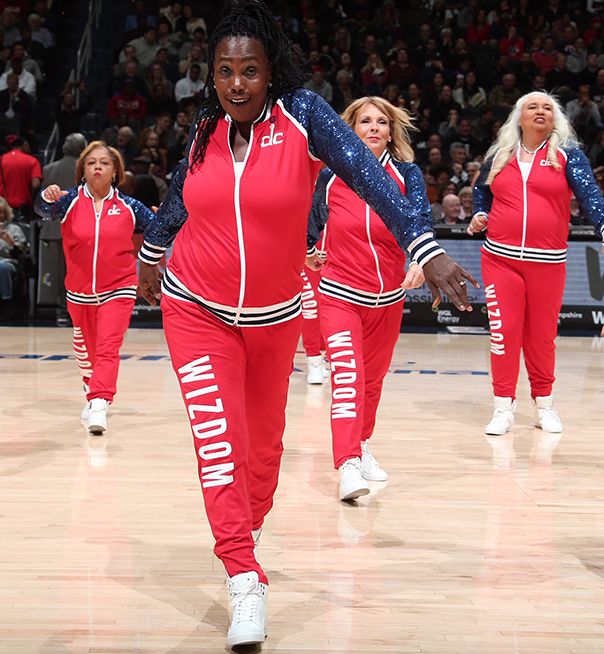 Traditionally, NBA dancers have seemed to exude effortless beauty and grace. With their sparkling sequins and high heels, they own the court with elegance and poise. However, in the past, both the NBA and the NFL have been charged with lawsuits citing claims of unfair pay, gender discrimination, and sexual harrassment. Employees have reported a dangerous level of body shaming in the work environment, pressuring workers to lose an unhealthy amount of weight and to undergo tiresome beauty routines (such as spray tans and manicures).

On November 24, 2018, defying the normalized toxic standards for NBA dancers, a dance squad for the Washington Wizards ruled the court. Flaunting bright and sparkly red, white, and blue attire, they completely bust out and let loose on the dance floor. Named Wizdom, they looked like any ordinary dance team a fan might expect to see at a professional NBA game with one deviation: all of the dancers were over the age of 50.

The AARP (Association of American Retired Persons), the team’s sponsor, documented a rigorous audition process in which over 50 people tried out for a spot on the Wizdom dance team. Ranging in ages 50 to 76, Wizdom consists of 19 women and one man, including former cheerleaders, several grandmothers (and great-grandmothers), a dentist, and a breast cancer survivor.

With contagious enthusiasm, Wizdom members are incredibly dedicated to their sport. Wizdom dancer Cindy Hardeman, 60, says “If we were to top it in order of why we do it, I’d say fun, fun and fun.” Dancers practice for two hours each Sunday, with at least three rehearsals in between every performance. They learn their dance at the first practice, adjust on the second day, and fine-tune the whole routine at the last rehearsal.

Make no mistake, Wizdom dancers are not second-rate performers. Initially, they receive many whoops and hollers from the audience because they’re “old,” but many are pleasantly surprised to see that their moves are precise and energetic, proving that rhythm has no age. The team’s choreographer, Derric Whitfield, says “They’re very well-rehearsed, perform with a lot of energy, charisma, style, and are just entertaining to watch.”

Wizdom has provided a wonderful opportunity for dancers on the team. It not only gives them a way to get more exercise than they would be able to otherwise, but it gives them team bonds that will last a lifetime. Kristina Leach, 68, is another member of Wizdom. A former cheerleader for Washington’s NBA team, she lost her husband a few years ago. She says dancing for the Wizdom has been the “best thing to happen to me.” In addition to providing the team with an amazing experience, the audience had the chance to connect with Wizdom themselves.  A member of the team, Theresa Cizmar, says “They see themselves. It’s like, ‘If you can do it, then I can do it.’ I look out for people who are kind of looking at me and dancing with me, and I throw a little face their way.” In this way, the audience draws inspiration from the dancers as they do what they love the most.

When the music blasts and Wizdom performs, they make it abundantly clear that they belong on the court, leaving absolutely no doubt in anyone’s mind. Wizdom has been deemed such a success that the Wizards are hosting tryouts again this fall. Current Wizdom dancers will have to re-audition if they want a spot on the team next season.

Before Wizdom, NBA dancers were pressured to rise to certain stereotypical and dehumanizing expectations. In order to keep their job, they were forced to lose harmful amounts of weight to maintain a uniform body type. The fact that they were expected to be petite and skinny in order to keep their job is disgusting and pathetic. It is downright shameful that a multi-billion dollar association, such as the NBA, drove and popularized fatphobia. However, because of Wizdom, this team has completely revolutionized the idea of what a typical NBA cheerleader should look like; now, dancers are no longer expected to act or look a certain way. Wizdom has put an end to the dangerous culture of body-shaming that was previously allowed to thrive within the NBA. Currently, there are around a dozen dance teams with members 50 and older performing at NBA venues (including the Chicago Bulls and the Golden State Warriors). That number is likely to increase, indicating a promising future ahead for all dancers 50 and older. The opportunities such a team brings will never grow old.