Luodi Wang
and
January 20, 2021
in
World
Courtesy of The Wall Street Journal 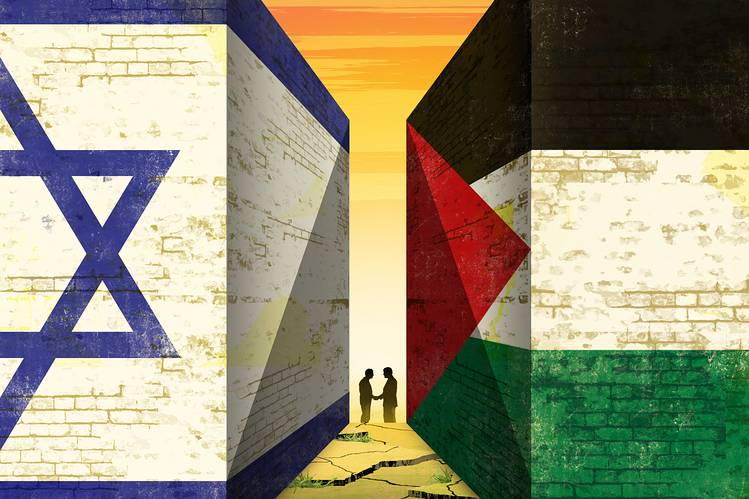 For decades, the conflicts in the Middle East have raged on, largely due to foreign interference in the region, resulting in the worldwide spectators of an atrocious, egregious, and deadly fight for power between Palestinians and Israelis to colloquially refer to the entire region as just that- “the Middle East.” There are constant battles between two countries battling over sacred land stolen from them and divided by former European empires and to this day, we see the ramifications of reckless foreign interference. To understand the reasons for the unmitigable conflict we see today between Israel and Palestine, we must first wind back in time and reflect upon the creation of the capricious state of these two countries.

The entire region known as the Levant was ruled by the Ottoman Empire pre World War I, and during it, Britain’s campaign to drive them out through brutal Arab uprisings only resulted in betrayal and loss of native Arab land. With divisions that ignored ethnicity, it gave to the eventual disastrous uprisings and conflicts that followed in the centuries ahead. And with the British promise of a Jewish land, this immense upheaval of Arab lab was perpetuated, further extending European colonization in the region through a seemingly-innocuous path. In 1948, after the Jewish Holocaust and as the nations of Europe re-entered a state of general peace, the state of Israel was founded in the Middle East- without even a semblance of due process nor consideration for the existing residents of the claimed land, the Palestinians.

These new Israelis knew one thing: they would not ever accept any form of concessions to leave their sacred homeland, after a history of strife and forced diasporas stretching over thousands of years. No longer would they become powerless and incapable to defend themselves and have their military branches just suffice to defending their country. Thus, the military power state was born, on stolen land. With conflicts initiated by the creation of the Israeli state, the first Arab War with Israel resulted in  the state conquering lands taking up 78 percent of historical Palestine, while the Gaza Strip fell to the military rule of Egypt. Fast forward to 1967, when the  Arab world once again fought with Israel- this time over shipping blockades in Gaza and escalation over the recognition of Israel as a sovereign country. During the six-day war of 1967, the Israelis seized territory stretching from the Egyptian Suez Canal to the Syrian Golan Heights, further angering the Arab world, and rightfully so, as their native land was being stripped away.. Over the last half century, Israel transferred 750,000 Jews to the West Bank and Jerusalem. In 1982, Israeli’s borders were drawn to their modern-day form in return for recognition in Arab countries, and the 1992 Oslo Accords guaranteed parts of the West Bank to Palestanian authority once again.

The indomitable spirit of Zionist conservatives laid the bedrock for today’s atrocities committed by Israel in Palestine, one of them included Prime Minister Benjamin Netanahyu’s father, Benzion. An ultraconservative who believed the fate of Jewish people was torture and extermination if not for an extensive military for the country, he was sidelined in the academic world and ended up in America. For Netanyahu, his military experience and father are his biggest infleuncers. To the Palestinians and their supporters around the world, Netanyahu’s fervent jingoism violates the very framework of international law, yet to the Israeli Zionists and American Conservatives, their strongest supporters, he is defending the Jewish ethnicity from imminent death and danger posed by the Muslim world, a man whose heroism is second only to Abraham.

Whether of not the existence of terrorist attacks in Israel requires the country to prop up its defenses, Israel has no reason for its arbitrary arrests, torture, and reckless treatment of Palestinians. The land of the West Bank belongs to Palestine, not Israel. Blockades over Gaza Strip are peddling a tragedy for 3 million people, many of them young children. Rocket launches into innocent civilian populations should not be a norm and firing shots into crowds of angry protestors is not a solution. Nor should the harassment and haranguing of the press should become a normality. Imprisoning 182 children is an act done only by torturous regimes like North Korea- this is a moment when we should realize that the actions of Israeli government are no longer justified through any means. Children are not criminals or terrorists, they are the future of our world.

However, neither side is free of the blood on their hands. Palestine’s democratically-elected government, a group named Hamas, have committed multiple terrorist acts on Israeli people, injuring and killing innocent civilians. While the facts are clear, that both Israel and Palestine have blood of civilians on their hands and continue to endanger the lives of many more, the justifications for either’s actions are up to a contentious, international debate.

For Israel, dangers posed by Hamas’s terrorist acts still exist, but this conflict will only be exacerbated through the means of evicting, arresting, torturing, and massacring an innocent population. The Palestinians have the right to be angry, as their people’s homeland for the past two thousand years is being stripped away in a genocide backed by foreign powers. Yet despite this, the Israelis have stated their will clearly to the world: they believe unity and peace is overruled by nationalism and a Zionist vision.

A new Prime Minister of Israel takes oath of office in November, succeeding Netanyahu, perhaps drawing a veil over the past and uplifting a new generation of hope for both Israelis and Palestinians. But there is no guarantee that this conflict will end. The abuse, torture, and killings of innocent civilians will not end in an instant.

No matter the conflict, we must continue to advocate and fight for those in need and suffering, even from halfway around the world, because this is a fight between radical governments- not between civilians who want no more than safety, security, and a home. A peaceful solution is long overdue, and with the United Nations recently voting in favor of Palestinian statehood in an overwhelming majority of 163 to 5, these persecuted peoples may finally have the voice they need.