The True Story of Thanksgiving

The untold origins of the autumnal festivities

Linda Lin
and
November 25, 2021
in
History
Courtesy of Getty Images 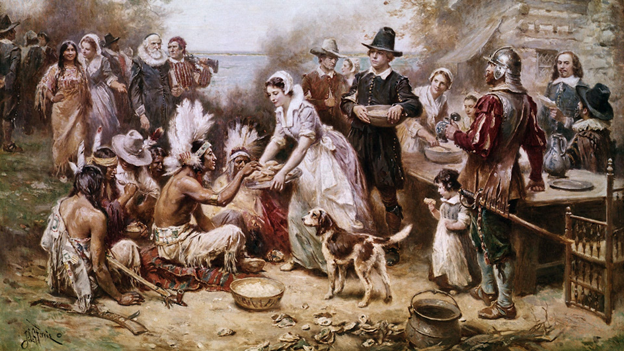 With Thanksgiving right around the corner, the classic retelling of the first Thanksgiving dinner begins to make the rounds. Adults and children alike have the story of the unlikely acquaintanceship between local Native Americans and the English Pilgrims ingrained in their minds since their first Thanksgiving day. As idealistic as the story goes, the truth is never as it seems when it comes to the colonization of the Native peoples.

The Thanksgiving myth is as follows: as the English Pilgrims disembarked the Mayflower and acquainted themselves with the wilderness of Plymouth, Massachusetts, they quickly realized the tribulations that come with starting a new life in America. Fortunately, the local Native tribes greeted the Pilgrims with open arms and open hearts, aiding the white settlers in their journey to create a new nation.

The natives taught the settlers to plant corn, and during the Pilgrim’s first successful corn harvest in November 1621, Governor William Bradford invited their Native American allies, including Chief Massasoit of the Wampanoag tribe, to the first Thanksgiving feast. Members of such largely distinct groups enjoyed the festivities that supposedly lasted 3 days long, and the rest was history.

However, nobody seems to remotely mention the grim ending of the supposedly whole-hearted encounter; a story ruined by betrayal and greed. Many aspects of the story curve around the more disdainful parts of history and other details are straight up fabricated to fit the white narrative.

The arrival of the Pilgrims was not the first time the Wampanoag tribe made contact with Europeans; in fact, the confrontation was preceded by a string of violent episodes starting from as early as 1524. In this time frame, European colonizers captured coastal Natives and proceeded to sell them into overseas slavery, or force them to become interpreters and guides.

Additionally, European diseases devastated the coastal Wampanoags, reducing their numbers greatly and leaving them vulnerable to attacks from both foreign explorers and rival tribes. In response, Chief Ousamequin reached out to the Pilgrim community in the hopes of a military alliance and access to European weaponry as a means to fend off the rival Narragansett tribe.

The Thanksgiving myth completely disregards the reality of the situation that resulted in the unseemly alliance. Rather, Americans highlight the successes of the Pilgrims and their goodwill in inviting their Native allies to a display of their wealth.

The supposed 50-year alliance was a glamorized farce as well; relations quickly poisoned after Ousamequin’s death in 1660 but antagonism already brewed under the covers prior to his death due to the aggressive expansion of the colonists. Tensions finally broke during King Philip’s War, as thousands of Native peoples were massacred by English forces.

The nasty underbelly of the real Thanksgiving story has long been exposed upon further inspection of history, yet the topic is left undiscussed. This leaves us to wonder just how and why the Thanksgiving myth was fabricated.

The answer dates back to the late 19th century; apprehension stemming from the white Protestant community in the United States over the immigration of European Catholics and Jewish peoples was at an all-time high. In an effort to prove themselves culturally superior to the new migrants, white Americans backed the concept of Manifest Destiny, the divine right to expand, by asserting that the Natives resigned themselves to colonization- and even aided in the process.

The racial politics of the 19th century further pushed the narrative of a bloodless conquest in order to cleanse their name of any sinful deeds. The white colonizers preached the concept of a peaceful transfer of power, and the divine right to subjugate the entire American frontier.

In actuality, present-day Wampanoags reflect on the Pilgrim encounter through a somber lens and continue to mourn the consequences of the Native-Pilgrim alliance. The portrayal of the Native tribes and the English Pilgrims continue to harm Native American communities today through their complete disregard of the adverse situation of the Wampanoags throughout their encounter with European settlers.

As families and friends plan their gatherings and prepare the turkey, the true account of Thanksgiving remains the elephant in the room. Will the falsifications and glamorizations of the Native-Pilgrim alliance finally dissolve centuries later, or will they continue to persist through the white-oriented perspective of society? Regardless, the retelling of the Thanksgiving tale serves as a clear-cut reminder of who wrote the history of our nation.