Following the hearing of the Mississippi abortion law, the Supreme Court appears inclined to overturn Roe v. Wade with a 6-3 majority, making it significantly more difficult for pregnant people to access abortions.

Ziqing Kuang
and
January 6, 2022
in
Justice
Courtesy of The Guardian 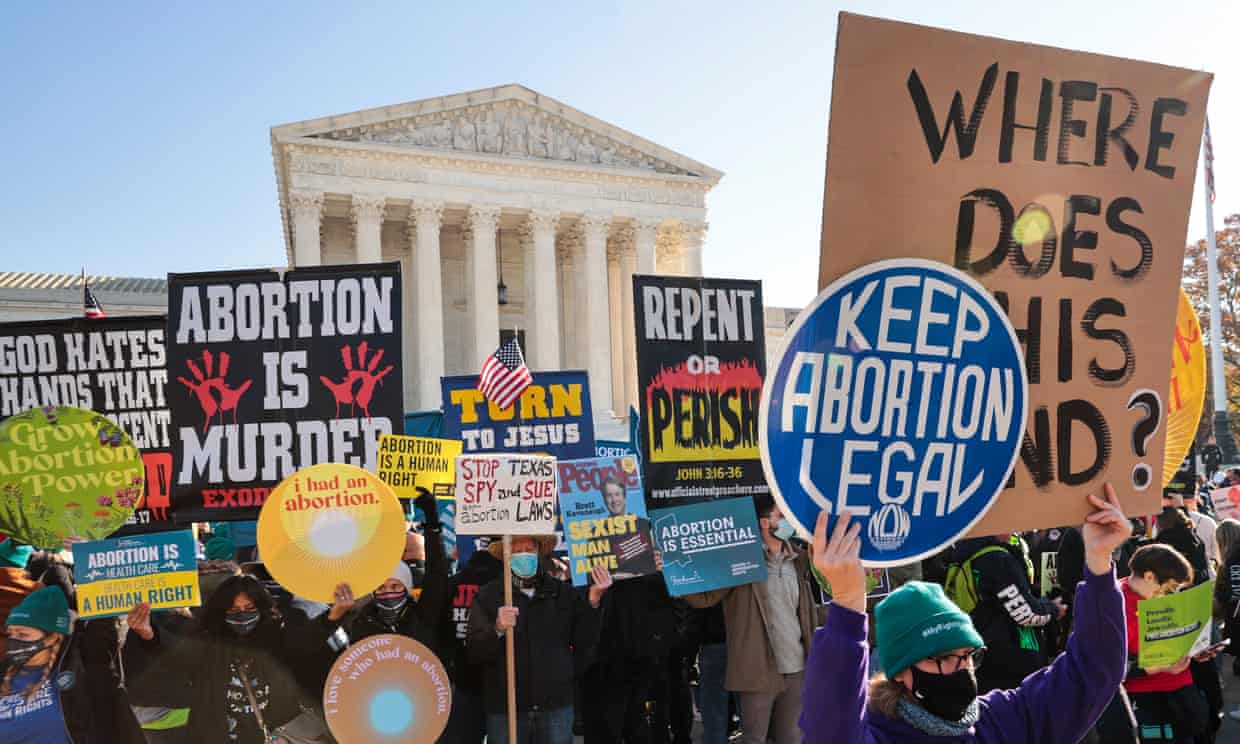 Republican-appointed Supreme Court justices have started to break down the 50 years of precedent set by Roe v. Wade by attempting to remove the national right to abortion. There has been an increase in the discussion of the topic, and activity will only begin to spiral upwards after the hearing of the Mississippi abortion law, where there’s an estimated 6-3 Republican majority. There is also the infamous Texas abortion law being presented before the court, but the Mississippi case challenges the Roe v. Wade law directly. For some background information on the 1973 decision, it essentially concludes that states are forbidden to ban abortion unless the fetus can survive outside the womb. Then, under the 14th amendment of the Constitution, the Supreme Court ruled that a woman has the right to an abortion by the right of privacy. If it gets passed, the Mississippi law will ban abortions after 15 weeks of gestation and would be allowed “only in medical emergencies or for severe fetal abnormality.” It does not set aside exceptions, such as rape or incest. Abortion would be illegal in 26 states if Roe is overturned, and that includes states that institute total bans on abortions. The Guttmacher Institute suggested that Americans would have to drive hundreds of miles to access abortions if Roe is overturned. That would cause a rush of demand in states such as Illinois and North Carolina.

Neil Gorsuch, Brett Kavanaugh, and Amy Coney Barrett, the court’s three newest justices who all happen to be Trump appointees are all ready to side with Mississippi and are willing to reserve Roe and most likely other decisions based on privacy rights. There is the question of whether this decision will be an immediate reversal or will be a multiple-step settlement that will take a couple of years to play out. The Supreme Court will most likely make a decision around mid-2022. U.S. Solicitor General Elizabeth Prelogar called described abortion as a fundamental right of women during the Dobbs argument, thus backing the fact that states should not be responsible for a fundamental right that should lie in the hands of women. Conservative Chief Justin John Roberts has been a swing vote on a multitude of issues in regards to protecting the Supreme Court’s reputation.

Abortion rights have survived legal attacks before, such as Planned Parenthood v. Casey, where it was decided that “liberty finds no refuge in a jurisprudence.” Even in 1992, there were changes in the Supreme Court that led to the possibility of the overturning of Roe when there were challenges to several Pennsylvania abortion restrictions. The court was able to reaffirm the core holding of Roe that every woman has a right to make her own personal medical decisions. Many women across the country have already reflected on the many ways that this court case will affect them and their bodies, such as traveling to access abortion. Many of them will be scarred mentally due to the traumatic experience of carrying a child to full term if they are not ready to be a mother. In an interview with Time, Melissa Mills, Roe’s oldest daughter, described her terrific concerns about Texas’s law that prohibits abortions after about six weeks. She answered that it makes her extremely worried for her children and the healthcare system. She believes that men need to be held accountable on their side of this national debate and to not put so much guilt on women for taking care of themselves.

To learn more about the history and impact of Roe v. Wade, read this report provided by Planned Parenthood. For more updates on the case, there is a section on Politico that releases weekly articles on the progression of court decisions on abortion.