The Success of Switzerland’s Sex Boxes

In Switzerland, prostitution is treated as an accepted and normal profession, which is exactly how it should be everywhere else. 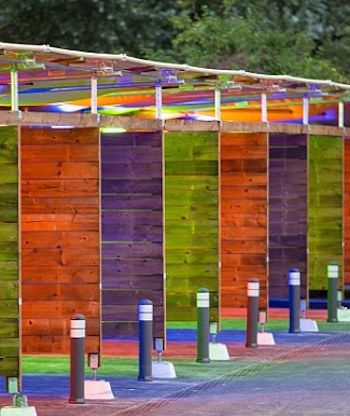 In Switzerland, prostitution is normalized and widely accepted amongst citizens. In fact, sex trade in this country has been tolerated since 1942. Subsequently, it comes as no surprise that every evening in Zurich, Switzerland, a long line of cars waits on the way to a drive-in in the city’s Strichplatz area. The customers aren’t waiting to see a drive-in movie, however, but rather they’re anticipating a different kind of business: to spend time in one of Zurich’s sex boxes with prostitutes.

For years, sex workers conducted their business in the city’s riverfront area. However, the residents nearby relentlessly complained about traffic, noise, and other disturbances from pleased clients. As a solution, in 2012, 52% of Zurich voters approved a city plan to use $2 million of taxpayer dollars to build multiple drive-in structures for this purpose. These “sex boxes” were built far away from residential neighborhoods in safe and inconspicuous environments. Another 800 thousand dollars was later designated for annual operational costs, including on-site social workers and security.

To city authorities, the location makes a lot of sense. As noted on their website, this specific area was intended to “improve the working conditions of sex workers – their health, physical and mental integrity.”

Since its opening, several improvements have been made. The original structures only accommodated clients with vehicles; however, after receiving complaints, the government built more structures which included plank beds, “responding to concerns that not all customers want to receive services in their car.”

The sex boxes are regulated like a business. The office hours are from 7 pm to 3 am during the week and until 5 am on weekends. The price is determined between the customer and the prostitute — the staff doesn’t interfere with these arrangements. After selecting the price, the customer and worker drive to the box. For privacy reasons, there are no cameras present, but each box is supplied with an alarm button that will call for guards in case of an emergency.

The Swiss have proceeded with extreme caution and taken a sensible approach to prevent sexually transmitted diseases, exploitation, link with criminal networks, or other common problems in countries where the sex trade is prohibited. In return, prostitutes are expected to undergo regular health checks and register with public health officials.

Throughout history, sex workers have always been subjected to humiliation and dehumanization, from their clients and authorities alike. Even today, prostitutes are cheated out of an identity and reduced to a stigmatized profession. Additionally, the conditions that sex workers are forced to work in are degrading and demeaning. Many prostitutes are left vulnerable to attack because of a lack of laws to protect them. They feel afraid to report abuse because of fear that they are the ones who will instead be prosecuted, not their perpetrators. Furthermore, making prostitution illegal in the United States and forcing sex workers to work in such an awful circumstance perpetuates the idea that this profession (because that is really all it is) is morally indecent and a crime.

In Switzerland, sex work is treated just like any other service in the industry. Ideally, this is how it should be everywhere. We need to start treating sex workers as human beings. They deserve the same respect and dignity as anyone else. They deserve to feel unafraid and assured in their place of work. They deserve to not be looked down upon as if they’re committing a sin everytime they provide a service. But most importantly, like everyone else, they deserve the right to work in a safe and protected work environment.