Over the past six months, youth-led protests have only grown stronger in an effort to overthrow Thailand's current military dictatorship 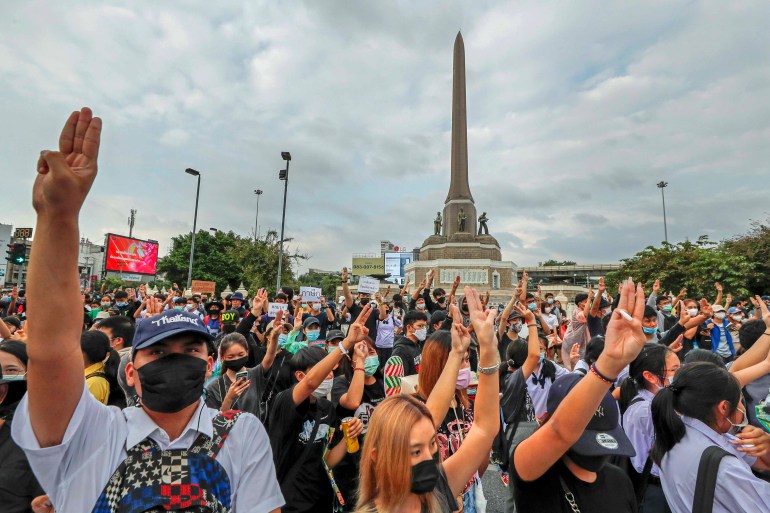 Chances are that you’ve come across plenty of images showing thousands of people peacefully rallying in Thailand, a clear example of modern youth-led protests that have fought back towards their country´s growing repression.

Pop culture references, such as the Hunger Games salute as a sign of resistance, have been used as symbols for protesters to call for the reform of various political and social pre-existing structures within their monarchy. These protests are all in order to fight for democracy in their country, one that has seen the weight of intolerance and apprehension for people-driven movements and has gone to great lengths to undermine basic freedoms of expression and peaceful assembly.

When it comes to oppression, the Thai have experienced it all. As a result of the 2014 coup d’etat by the Royal Thai Armed Forces, approved by the king after months of political uncertainty, a military dictatorship was imposed upon them. Having had 17 constitutions in history, the still-present relationship between the monarchy and the military continues giving the crown power above all laws, with impunity by their side. Undoubtedly, after half a decade of repressive military rule, what the social activists of Thailand want is to have a democratic government to represent them through a constitution truly written by the people and for the people.

The pro-democracy movement, which consists mainly of youth-leaders, has gained momentum since July. Despite being overshadowed by other global issues, rallies and demonstrations have continued to take place. Having gained strength in the last couple of months, protesters have pushed for key demands, including the resignation of Prime Minister Prayuth Chan-o-cha and his cabinet and changes to Thailand's constitution, specifically the privileges the monarchy holds under it.

Thailand's current legal framework questionably allows authorities to hinder their civilians´ liberties. By previously enforcing strict rules regarding public gatherings-with the current pandemic as a disguise- the government tried to diminish political and social discontent by imposing a state of emergency. This has allowed officers to detain protesters without adequate processes, including no charges, access to lawyers, or contact with their families.

However, demonstrations have not diminished and instead have seen the growing support from tens of thousands of student protesters. Thailand’s own monarchy and government have come under fire as the youth-led movement continues to expose the country's lack of structure. Protests have continued pushing for the restrain of the royal’s family wealth, including the separation of the king’s private funds from crown assets and the removal of constitutional laws that punish disapproval of the crown.

The pro-democracy movement can be traced back to past mass youth protests in the 1970s and most recently during the 2019 elections. The last straw? The dissolution of a popular political party, Future Forward, which, after being attacked by government officials, was ultimately terminated by Thailand's Constitutional Court in 2020. Other factors such as the influence of other movements, like those in Hong Kong have heavily contributed to Bangkok’s unrest.

Despite their growing spotlight, protesters continue to face the many harmful multifaceted consequences of critiquing Thailand’s authorities. Serious social concerns for demonstrators have risen as the handling of protesters by the police has led to cases of violence and censorship. Most concerning, the government has implemented vague laws that allow for the censorship of their opponents and up to a 7-year sentence, having convicted more than 80 protesters since October.

Not only are protesters facing oppression on the streets, but they are now facing cyber-prosecution. Thai authorities have taken action against social media users accused of criticizing the government online, with Facebook recently confessing their past compliance with the Thai government to censor political content on the platform. However, demonstrators have managed to organize marches and rallies without the interference of authorities with the use of certain apps such as Telegram.

While protesters continue to face violations of their human rights, such as being targeted with water cannons, irritants, students have not shown any signs of defeat. Instead, demonstrations have continued to grow and the push for democracy has continued to thrive in a government that has long belittled it. Protesters have closed the breach of a historic time between wanting to hold the royal family accountable and the taboo implication of calling out the long-standing monarchy, all while proving the power and resilience of today's youth.

The Raid on the Capitol: Domestic Terrorists Bring Democracy Under Siege