The police officer, however, did something I did not expect—he pulled me over

DeVon Thompson
and
January 12, 2021
in
Personal Narrative
Courtesy of The Mercury News 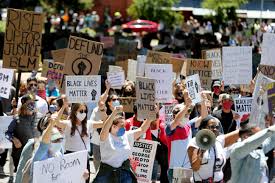 One Saturday night in the summer, I was doing what most 14-year-olds do: riding my bike home after an eventful day with friends. The summer night was beautiful, but that didn't take away from the fact that I had to make curfew—10 o’clock. While trying to soak up the night's beauty, I peddled swiftly to ensure that I wasn't late home—little did I know, I would have plenty of time to admire the night sky.

About halfway through my 2 mile trip home, I noticed blue and red reflecting off the glass of the building in front of me. Without looking back, I knew where the lights were coming from: a police officer’s car. The police officer, however, did something I did not expect—he pulled me over.

This was scary. My mother had always talked to me about the possibility of being stopped by police and as a Black boy, I had learned that Black people are at significantly higher risk of being treated harshly by them. My feet were planted in the ground, and I shook with fear as the officer stepped out of his car. He walked slowly toward me, looked up in my eyes, and said, “You're in some trouble.” I had never been so confused and afraid.

The rest of the beautiful night was a nightmare. The officer went on to accuse me of stealing my own bike, a bike my mother had worked hard to buy from Walmart. Along with that, four other officers were called to the scene of the “crime”, and while crying, I was placed into the back of a police cruiser without any evidence of committing a wrongdoing. However, I failed to realize that no evidence other than the pigment of my skin was needed to automatically convict me of a crime. None of my white friends riding home on their bikes had been stopped. Only officers who believed a true wrongdoing was committed would place a crying 14-year-old into the back of a police cruiser— to those police officers, my black skin was the only evidence that was needed.

Associated with black skin is a collage of stereotypes that shape how people perceive Black people. White people today often believe that Black people are dangerous, criminals, or even intellectually inferior. According to a Pew Research survey, 65% of Black people in the US have experienced multiple situations in which people have acted suspicious around them for no reason. The same survey shows that Black people have experienced others acting as if they thought they weren’t smart, being treated unfairly by an employer in hiring, pay or promotion, or being unfairly stopped by police disproportionately more than white people. This problem is killing us.

I was lucky enough to make it home safely late that night after the cops kept me in custody until my parents picked me up. However, millions of Black people today are not lucky enough to escape the horrific consequences that stem from prejudice, stereotypes, and implicit biases. These underlooked issues plague our many systems. The police and criminal justice systems are failing the Black community by not addressing the overwhelming evidence of racism that emanates from bias. Black people are being falsely incriminated, falsely represented in the media, and worst of all—killed.

On December 4th, a Black man named Casey Goodson wasn't as lucky as I was in escaping the disgusting unaddressed issues of bias and stereotypes. While opening the door of his home, he was shot in the back three times by an officer. The officer killed this bright young man, an individual with a future ahead of him, because the color of his skin was enough evidence to connect him to a case that the officer was presumably investigating. Why would a man simply coming home from a dentist appointment, a man with no criminal background, a man with nothing but Subway sandwiches in his hand, be shot and killed on his own porch? The answer is simple: Casey was a Black man. And black skin, according to the stereotypes that contribute to the microaggressions that we see everyday, is a sign of danger—how else could an innocent human be shot in the back for absolutely nothing? The false stereotypes that “justify” these racist actions have become embedded in our police systems and ultimately, our country has failed to uphold its values of egalitarianism by not addressing this.

The standard procedure of a police man is not to shoot another man in the back. Even if Casey had been the man whom the officer was investigating, the officer would have still been wrong to just kill him. We have for too long allowed the officers of the law to resort to murder as a means of doing work. These officers are becoming badged murders; slaughter is a part of how they are “protecting and serving” our community.

The false stereotypes aligned with the Black community create an implicit (and, in this case, explicit) bias in our officers that they believe “justifies” their actions, including murder. Prejudice has clearly damaged our systems and not addressing a tarnished system is a failure to not only the Black community but everyone. The very words of the Declaration of Independence, “All men are created equal,” are utterly meaningless as it is clear that this is not true for Black citizens.

In order to uphold values of American society for all our citizens, the values that ensure that all individuals can safely and equally “pursue happiness” without the burden of apprehension found on every corner, we must commit ourselves educating our citizens: everyone needs to realize that biases, prejudices, and racism are part of a nasty plague that threatens the future of this nation. Let’s realize that these issues are real, they are hurting, and they are killing Black people in this America. Let's reflect on ourselves and work as a country to achieve a better tomorrow for all.