The Rotten Truth Behind Your Groceries

During this pandemic, many of the major grocery retailers have enjoyed massive spikes in revenue, profiting from the public’s panic in the wake of coronavirus, yet these increased revenues haven’t been transferred to their employees.

Akash Nayak
and
May 26, 2020
in
COVID-19
Esperanza Camargo, working at Northgate Market. (Photo/William Camargo/Voice of OC) 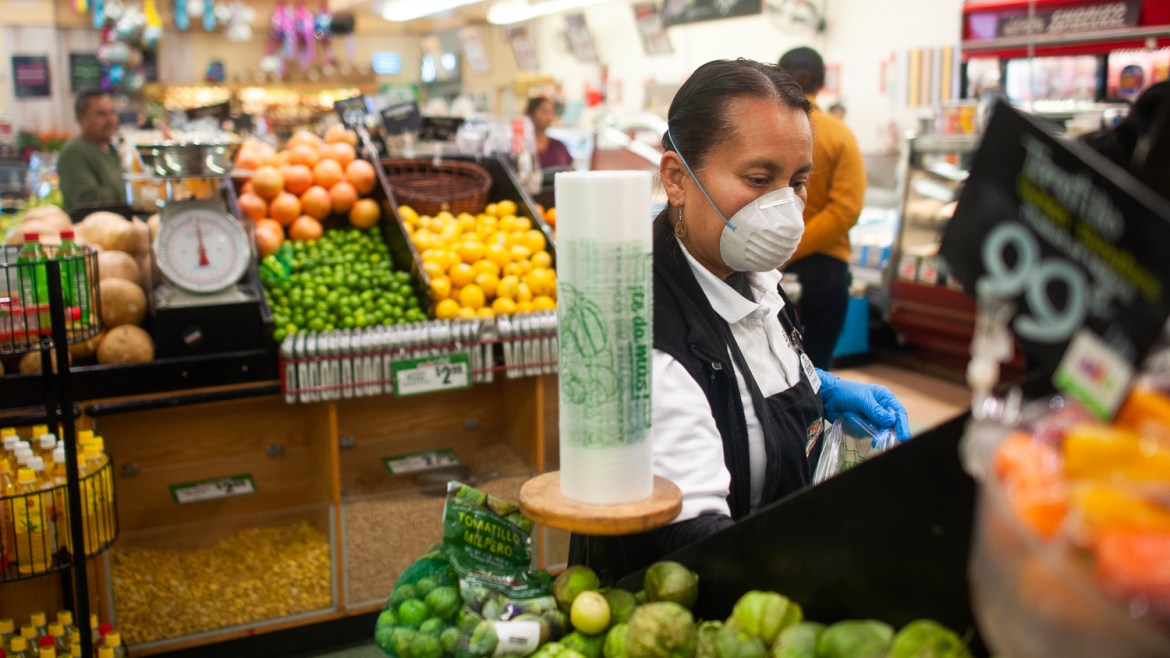 During a pandemic of unprecedented harm and impact, many still have the ability to put food on the table, enabled only by heroes who have not gotten the treatment and respect they deserve:  grocery workers. Throughout the pandemic, they have gone into peril for their families and ours, but the price that they have had to pay is unacceptable. Countless companies only offered restricted paid leave and have given little, if any, protection. Employers are convincing their employees not to join unions. The United Food and Commercial Workers International Union (UFCW), a large food worker’s union, has a “report an issue related to COVID-19” section at the top of its website. Now, it's time to uncover the rotten truth behind your groceries.

During this pandemic, many of the major grocery retailers have enjoyed massive spikes in revenue, profiting from the public’s panic in the wake of coronavirus, yet these increased revenues haven’t been transferred to their employees. Instead, workers often have to make impossible decisions concerning their finances. These decisions mainly stem from the topic of paid leave. During this pandemic, it is extremely important for those who are sick to “not leave your home, except to get medical care,” according to the CDC. They specifically state to “not visit public areas” if you are sick. Yet, these recommendations have become increasingly difficult for grocery store workers to comply with, especially because of company policy.

In some of the large grocery chains, employees must get a positive COVID-19 test result to get paid leave, ignoring the widespread lack of tests. Even though companies, like Whole Foods and Kroger, changed their policies to a case by case basis, issues still exist. According to Reveal, one Whole Foods employee in Chicago asked for paid leave after stating that he felt sick but reported that he still hadn’t heard back after a week. Hypocritically, companies like Trader Joe’s advertise great benefits and paid leave yet fail to support their employees in the most dire time. With these policies, employees have been forced to come to work sick or risk financial turmoil to keep people safe.

Unfortunately, the paid leave troubles are only the beginning.

One employee of Winn-Dixie spoke with Reveal and discussed his experience working as an essential worker in a supermarket. Besides not being paid while he stayed at home for three weeks due to his symptoms, he faced terrible conditions at work. Once he returned, he quit just after a week because of frustration at the lack of protections. This frustration is not limited to a few chains. UFCW completed a survey of 5,000 of its members and reported that 85% of these members said that customers are not practicing social distancing in stores. Along with these hazardous working conditions, employees are getting mixed messages from management on protective equipment.

Juan Boria, a Trader Joe’s employee, talked to the New York Times and discussed her experience with protective equipment. According to Boria, his manager told him to not wear a mask in front of customers. These statements have only been echoed throughout the country. Managers have frequently made employees remove protective equipment in order to avoid scaring customers. This protocol is also problematic because these companies often give confusing guidance for employees. Traders Joe’s emailed out a statement stating that they have no official policy about gloves. This kind of leadership by company leaders is what causes confusion for employees and allows managers to put employees at risk.

Despite these issues, companies have been reducing the power of workers. In this crisis, unions have been a helping hand for countless employees. Kroger began to offer an increase of $2 per hour for three weeks, starting on March 29, through an agreement with the UFCW. Other grocery stores have also started to offer pay increases to largely-unionized workforces. It is clear that there is a great amount of power and protection in numbers, especially when they are organized under a union. As a result, grocery chains have started to move against unions in order to preserve their own profits. Trader Joe’s sent an email to managers encouraging them to tell their employees that joining a union was “like buying a house...you’re in for the long term.”. Managers also gave “anti-union lectures,” according to the New York Times, in further attempts to dissuade them from unions. These actions are deplorable because unions are one of the only ways that workers get the reforms they need.

Overall, it is important to realize the true cost of putting food on the table. Not only are people risking their lives, but others are not helping them in their efforts, even acting against them. But there are rays of light during this dark time. A Trader Joe’s in Escondido, California has been a case study to show what proper protocol can look like. With a limit of 50 customers in a store at a time, sanitization provided at the entrance and exit, and disinfection of each cart after each use, this store has done an amazing job in keeping its employees and customers safe. Now, no one has an excuse to say that proper protection is not feasible. We must protect those that put themselves in danger everyday because they do it for us. And if we fail, not only will there be unstocked shelves but innumerable precious lives will be lost.

Here's What Joe Biden's Plan to Address COVID-19 Looks Like