The Raid on the Capitol: Domestic Terrorists Bring Democracy Under Siege

If we do not demand the unequivocal condemnation of the invasion of our capitol, rejection of the racist standards on display, and guarantee of a peaceful transition of power, then the very sanctity of our democracy is at stake

Kendall Carll
and
January 7, 2021
in
World
Courtesy of The Nation 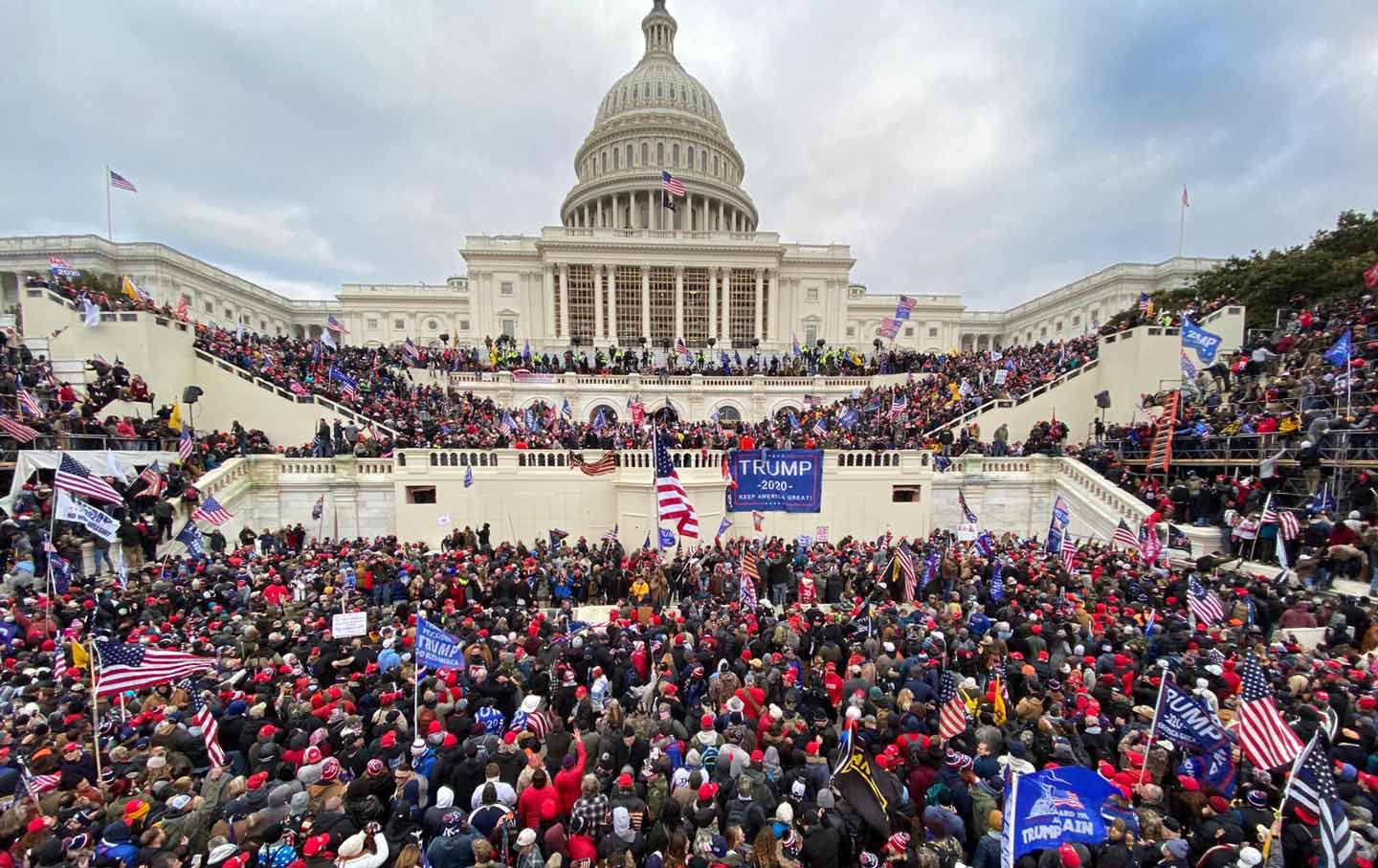 Shortly after 1:00 p.m. ET this Wednesday, hundreds of Trump-supporting rioters broke past the security barriers and wrestled with officers surrounding the Capitol. Within 90 minutes, demonstrators had breached the Capitol building and the doors to both the House and the Senate were locked. The intrusion, which occurred during the certification of Joe Biden’s election victory, forced the Congress to take an extended recess as both chambers were evacuated.

Social media erupted in the aftermath of Wednesday’s events as both young activists and seasoned politicians took to the internet to express their disgust. Instagram, Twitter, and even TikTok feeds were overwhelmed with the nation’s response to the day’s unprecedented events. Facing mounting pressures, Twitter and Facebook locked President Trump’s accounts, marking the harshest confrontation to date between the president and social media corporations. The very platform that contributed to President Trump’s rise as a politician, Twitter, now threatens him with a permanent ban.

Earlier in the day, Trump held a rally outside of the Capitol, promising an election victory and encouraging his supporters to protest while the electorate votes were being contested. Hours later, those same supporters were committing acts of sedition as the president retreated to the White House to watch the violence unfold. Trump tweeted for his supporters to “stay peaceful” and “go home”, but followed up by telling the soon-to-be felons, “we love you”. Trump’s lackluster response received backlash from every side of the aisle, and CNN’s Abby Phillips called the president’s response “incredibly shameful”. In response, President-elect Joe Biden declared the event an “insurrection” and called on Trump to go on national television to "fulfill his oath and defend the Constitution [by demanding] an end to [the] siege."

In a rare instance of agreement, Republicans joined their Democrat colleagues in condemning the actions of the rioters. Senator Chuck Shumer, D-NY, announced that “January 6 will go down as one of the darkest days of recent American history” in front of a distraught, yet determined Senate. Hours after demonstrators had entered the Capitol, Senate Majority Leader Mitch McConnell, R-KY, declared upon reconvening the Senate that “[the] United States Senate will not be intimidated . . . [nor] bow to lawlessness.”

Perhaps even more telling is the growing consensus in the Republican Party that the president's actions are not inspiring and patriotic, but childish and reckless. Half of the senators that began the day on Trump’s side broke with the president, leaving him with a measly 6 votes when Congress reconvened. Representative Cheney, R-WY, attributed blame to the president when she told Fox News “there’s no question that the president formed the mob”. Three of Trump’s aides, Stephanie Grisham, Sarah Matthews and Rickie Niceta, submitted their resignation, with many more expected to follow. And most importantly, Vice President Pence, who refused Trump’s demands to stop the Senate’s certification, has been advised by the DC Attorney General to invoke the 25th Amendment, and reports of preliminary discussions within the Trump administration cabinet have reached the Hill. If invoked, the 25th Amendment would declare President Trump “unable to discharge the powers and duties of his office”, allowing the vice president and a majority of the administration's cabinet to remove him from office. While only used once before in the fallout of the Watergate Scandal, Vice President Pence’s recent break from the president, including the fact that Pence, not Trump, activated the DC National Guard, and Presidential Historian Douglas Brinkley’s statement that the “country is being held hostage...by Donald Trump” show that this last-ditch effort to remove the president holds more weight than mere rumors.

As the nation watched the day’s events unfold, a stark contrast between law enforcement’s treatment of the pro-Trump protests and this summer’s Black Lives Matter movements began to form. In what former Secret Service Director, John Magaw, calls an “unprecedented” security failure, people forced their way into the heart of this nation with nothing more than flags, riot shields, and the occasional shove. Cell-phone records show officers appearing to step aside as the Trump supporters made their way into the Capitol building. It became clear that police had not anticipated and were ill-prepared for the protestors’ forced entry as law enforcement experts said they were mystified by the tactics employed by Capitol police. One woman was shot and killed by Capitol police as the officers attempted to stop a group from entering the building. But other than that, police officers seemed to stand by as the American symbol of strength and order fell captive to chaotic invaders. One picture posted online shows Capitol security taking a selfie with intruders as they actively engaged in sedition, a felony charge carrying a 20-year prison sentence. Other images show officers holding a woman's hands as they peacefully escort her down the steps of the Capitol building. The Washington Post reported that very few people were arrested for the breach, even as dozens cheered on their accomplishments while exiting the Capitol through doors held open by officers.

Civil rights leaders have put law enforcement on blast for their slow response, pointing to the contrasting treatment of Black Lives Matter demonstrations as evidence of a clear double standard. Despite the vast majority of the over 9,000 Black Lives Matter demonstrations being peaceful, the activists faced a show of police force massive in comparison to the security easily bypassed by the pro-Trump rioters. Law enforcement was deployed with riot gear, military-grade weapons, and armored vehicles. Even during entirely peaceful protests, demonstrators were tear-gassed, arrested, and shot at with real and rubber bullets. During protests in DC itself, the Lincoln memorial was preemptively protected with members of the DC National Guard, armed and wearing camouflage uniforms.

Representative Marcia Fudge, a Democrat from Ohio and former chairwoman of the Congressional Black Caucus, said that there is “no question” that law enforcement’s response to the Capitol raid varied greatly from their treatment of last summer’s BLM movement. The official Black Lives Matter Twitter account criticized the “hypocrisy in our country’s law enforcement response to protest." “When Black people protest for [their] lives, [they] are met by National Guard troops or police equipped with assault rifles, tear gas and battle helmets. When white people attempt a coup, they are met by an underwhelming number of law enforcement personnel who act powerless to intervene," the account continued.

Indeed, the glaring differences in both Capitol security’s preparation and response exemplify the systemic racism within US law enforcement. Those attempting to draw a comparison between a Target in Minneapolis and the Capitol of the world’s oldest democracy are either sorely mistaken or intentionally misguided – and in many cases they are both. To be entirely clear: if any other group of people stormed the US Capitol, it would be treated for exactly what it is – an act of domestic terrorism.

Let us not glaze over the dangerous precedent set on January 6th, 2021. This day marked the first time the US Capitol has been breached since the British attacked during the War of 1812. This day marked the first time in history the Confederate flag was flown in the US Capitol. This day marked what many are calling the second falling of Rome. If we do not demand the unequivocal condemnation of the invasion of our capitol, rejection of the racist standards on display, and guarantee of a peaceful transition of power, then the very sanctity of our democracy is at stake.