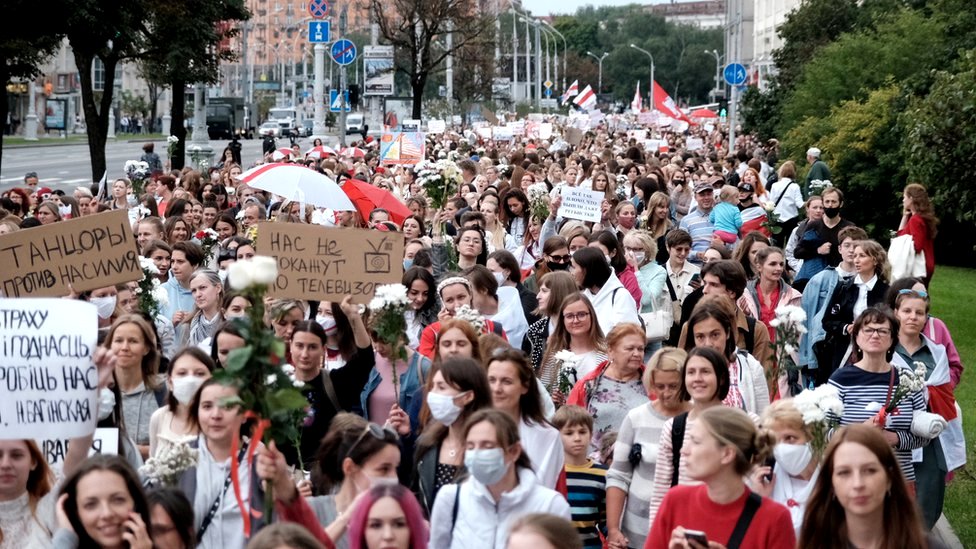 2020 has been a year of seeking social justice within the moral fabric of society - not just in America, but in countries such as India, Yemen, and, most recently, in Belarus. You might not have heard of this former Soviet-bloc country that lies nestled at the bosom of Russia and the Baltic states. For the past three decades, this land, nicknamed White Rus, has been governed by Aleksandr Lukashenko, a brutal Communist dictator with many human rights violations to his name.

President Lukashenko, “Europe’s last dictator”, has run a state of heavy surveillance, voter suppression, propaganda, political prisoners, and fraud ever since mid-1994. He is the country's first and only president and has overruled the 5-year presidential term limit time and time again, which the Belarusian Constitution states as being ‘renewable’. Former United States Secretary of State Condoleezza Rice termed Belarus as one of the world's six ‘outposts of tyranny’.

Where other former Eastern Bloc nations are trying to distance themselves from the image of the USSR, the Belarusian President is known for his overarching goal of turning Belarus Soviet-Socialist again. He has openly proclaimed his belief that personal freedoms are less important than ideological steadfastness and the promotion of a glorious state. Lukashenko is also in favor of freezing all personal assets and creating an entirely state-owned and controlled economy, taking away the last bit of freedom that the people of Belarus may have.

For several years, the people of Belarus have tried to speak out against their president, only to be muzzled by the government or thrown into prison. Lukashenko has faced ridicule and outright aggression from Western nations, and the European Union (EU) has almost cut off all ties with Belarus.

According to the website of the EU, “On 17 February 2020, the Council decided to prolong the restrictive measures against Belarus for one year, until 28 February 2021. These measures include an arms embargo; a ban on the export of goods for internal repression; an asset freeze; and a travel ban against four people…” The United States also created the Belarus Democracy Act of 2004, which would cut off trade with Lukashenko and actively fund the opposition.

Here are a few more of the crazy things that Lukashenko has done. Under his rule, Belarus has little to no freedom of speech, religion, or press, which is why it is so difficult to gain an accurate view of approval ratings and voter turnout. Lukashenko imprisons anyone who dares to question his authority or his regime. The police forces are also allowed to use what Hillary Clinton and Baroness Ashton coined as "disproportionate force" against protestors if they do assemble. We'll get to the protesting part in a bit.

Oh yeah, and he dismissed the coronavirus as a "frenzy and a psychosis" and claimed that working tractors, drinking vodka, and going to saunas would prevent people from becoming infected. He advised the Belarusian people to drink the equivalent of 40–50 milliliters of vodka daily to ward away the virus. It’s truly no wonder why Belarus has one of the highest per-capita rates of infection in Eastern Europe.‍

As you can see, Lukashenko isn’t exactly held in the highest regard, so when Sviatlana Tsikhanouskaya, Lukashenko’s opponent in the 2020 Belarusian election and the clear frontrunner in terms of popular support, lost a “landslide” election, protests erupted. Protesters clad in red and white - the colors of the former flag of Belarus before Lukashenko changed it - flooded the streets of Minsk and several other major Belarusian cities.

Euronews writes that the protesters “reject the official results of the August 9 presidential election which credited Lukashenko with more than 80 percent of the vote. Early on the morning of August 14, police deployed to block the streets around the headquarters of the Investigative Committee where the opposition activists were to be questioned. Several dozen demonstrators rallied nearby to protest the authorities' actions. A factory worker at the Minsk Automobile Plant also claimed that "hundreds of KGB operatives came to factories to question and scare the workers."

Protesters are certain that this is a classically authoritarian move and the occurrences of this month have fanned the flames of the anti-Lukashenko movement. Protesters are met with police in riot gear and with heavy weapons; many have been put in detention camps, brutally beaten, and killed. One rioter in the city square of Grodno openly said that the only thing that mattered to them was that Lukashenko vacated office. Of course, the dictator has no intention of doing so. The New York Times covered his incredibly smug speech. “We had elections,” he told a crowd of workers on August 17th. “Until you kill me, there will not be any more elections.”‍

As you can see, it's a less than optimal situation for the nation: helpless citizens, an egoistic and megalomaniacal dictator, and a world scrambling for order. But these protests aren't actually so helpless -  if you were paying attention in the article before (don’t worry, it’s okay if you weren’t), I mention the lack of freedom of speech.

The right to assemble is one facet of freedom of speech and voicing your opinion; this move in a country so heavily surveilled and policed is revolutionary and has incredible meaning for the other ‘outposts of tyranny’ and absolute monarchies.

In a troubled time of turmoil like 2020, it is easy to lose faith in our world and in the dirty game of politics as it is currently. As I've written this article, I've realized: if the suppressed people of this post-Soviet nation can together raise their voice and have news outlets, funds, and governments raise awareness about their situation, democracy and our natural freedoms can and will survive.