On June 22nd, I had the opportunity to attend the White House Iftar, to sit at the President’s table, to meet remarkable American-Muslim leaders, to be included in the President’s remarks, and to change my life forever. 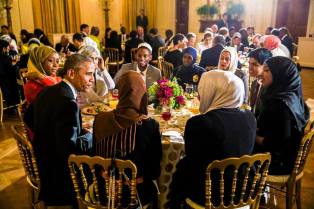 On June 22nd, I had the opportunity to attend the White House Iftar, to sit at the President’s table, to meet remarkable American-Muslim leaders, to be included in the President’s remarks (https://www.whitehouse.gov/the-press-office/2015/06/23/remarks-president-2015-iftar-dinner), and to change my life forever.

I can never thank you all enough for supporting me, encouraging me, and inspiring me. I am so thrilled that redefy has been recognized by the President of the United States of America, and I am beyond excited to see our advocacy of equality, acceptance, and understanding flourish.

Rachel Paoletta, the same brilliant MTV News reporter that did a piece on me a few months ago, interviewed me about my experience at the White House and meeting the President that you can view here: http://www.mtv.com/news/2195454/ziad-ahmed-iftar-president-obama/.

When I was little, I was determined to be the President of the United States of America. Politics quickly became one of my greatest interests, and during the 2008 Presidential Election I sent letters to all the candidates. I was a naive fourth grader that persistently read up on policy I didn’t understand. I dragged my mom to the Obama Campaign Office in Princeton as I wanted so much to be involved. The staffers at the office looked at me with endearing eyes, and handed me pretty little stickers.

I was eight-years-old at the time, and my desire to make a difference, to contribute to society positively, and to engage with the political process has only grown. I read the news everyday, and my heart is consistently shattered into a million pieces. My stomach churns when I read about a hate crime. My face twitches when I listen to a newscaster inciting hate, fear, and violence through their inflammatory bigotry. My body seizes up when I realize the extent of the injustice around me.

I refuse to be complacent.

I started this organization because nothing is more important to me than creating a world that is safe for all and accepting of everyone. Redefy is a platform by which people can learn about underrepresented minorities, advocate for social justice, embrace acceptance, and dismantle detrimental stereotypes piece by piece. Redefy is a vehicle for change, and my attempt to do something about the suffocating injustice. Through our articles, stories, programming efforts, and campaigns, my hope is that teens across the world realize our age does not limit our activism, all injustices are one injustice, and that we can and will make a difference.

Our age does not limit our activism.

I did not start this organization to be recognized, but rather I started this organization as a result of my observations, experiences, and passions. I am a non-conformist American-Muslim that is tired of seeing people shy away from their identity because of society’s unfair prejudices. I could never have imagined that my work, my words, and my will would bring me to the White House.

It is still so surreal.

To be invited to the White House Iftar, to sit at President Obama’s table, to be included in his remarks, and to meet so many remarkable American-Muslims will likely forever remain the highlight of my existence. The President looking at me while speaking about me in his speech is something that will continuously replay through my mind. Through my interest in the news, I have been disheartened by politics. Through tragedy, I have become a hardened realist. The White House Iftar has turned me into an optimist, and even a believer.

I am a believer.

When we have issues, qualms, and concerns with the government, we wish that we could have the chance to speak to high-level officials and properly effect change. I had that opportunity, and it was the most enlightening, refreshing, and thrilling experience. I sat a table with 8 brilliant people (https://www.whitehouse.gov/the-press-office/2015/06/23/expected-attendees-white-house-iftar-dinner), and discussed girls education, biased media, ignorance, discrimination, foreign affairs, counter-terrorism, and so many of the issues that are most important to me.

We must combat biased media through education.

Sometimes when issues arise we feel that we can’t do anything about them, but if I learned anything at that table it is that we can. Every story, anecdote, observation, and question that was responded to thoughtfully by the President, and for the first time in my life, I felt like the government truly cared about me, would listen to me, and that I could be a part of the American political scene. For a second, I even pondered the possibility of achieving my childhood dream of being the President of the United States of America. In that moment sitting across from President Obama, the realization that we are all human overcame me in a most beautiful way.

There are so many misconceptions about Muslims and Islam all over the world. In certain countries islamophobic legislation has been passed. I used to think that I could never win a political election because of my faith, but through being enraptured by the President’s wit, humor, articulation, and intelligence, I now believe. It is so important that the American-Muslim community emphasizes that the vast majority of us are moderate and furthers our collective engagement in politics.

I am so incredibly blessed to have had the chance to meet the President of the United States of America, Barack Obama. I was able to ask about how to change the mindset of society to one that is actively contributing to the pursuit of equality and how to most effectively engage teenagers in our country in constructive work. I am determined that the American-Muslim minority, all minorities, can work together to be productive, organized, and unified in defeating ignorance through education.

We must defeat ignorance.

It still hasn’t sunken in that I’ve met the President. Just today I wondered if it was all a dream. I am so beyond thankful to so many people, and I am so committed to accomplishing redefy’s mission of defying stereotypes, redefining perspectives positively, and embracing acceptance. I come away from the White House Iftar proud of who I am, motivated in my work, and ready to accomplish. Politics are messy, but I am now confident we have a brilliant President, and that I have the capability to influence this world positively.

I am beyond thankful to every person in my life for inspiring me, encouraging me, and supporting me.

Our future is going to be bright.