One of the most crushing issues among Native Americans is the disappearances and subsequent deaths of multiple young women.

Juliet Allan
and
March 20, 2020
in
Justice
A participant in the Greater Than Fear Rally & March in Rochester, Minnesota (Photo/Lorie Shaull/Nonprofit Quarterly) 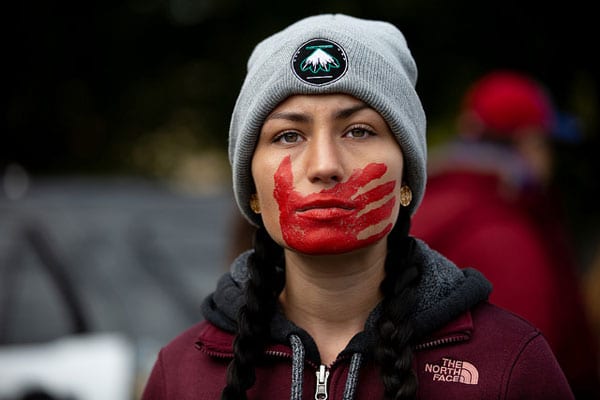 Historically, native populations in America have faced indisputable adversity, struggling with countless issues brought upon them by centuries of discrimination and mistreatment. One of the most crushing issues among Native Americans is the disappearances and subsequent deaths of multiple young women. So often are these cases dismissed or ignored by authorities that relatives and loved ones are left with the responsibility of finding and rescuing the missing girls themselves. Even the cases that are brought to court often don’t receive the justice they deserve. Sarafina Jo, a tribal citizen of the Navajo Nation, attended a women’s march in Phoenix, Arizona, bearing a flag with her sister’s name on it. Her sister had died on Christmas day as a victim of domestic violence, but her accuser was not charged murder but rather aggravated assault, a much lesser charge. This is one small example of the way discrimination adversely affects so many Native Americans. Instances like this only perpetuate the systematic oppression of this incredibly important and historic community.

On the Wind River Native American Reservation, the residents and members face a grim life expectancy of 49 years and an unemployment rate of about 80%. These statistics, however, are unfortunately not the most shocking. The inordinate amount of young women who have gone missing is staggering. Somehow, despite this, there is no real missing persons statistics for Native American women, despite there being one for the vast majority of other demographics. According to the New York Times, Native women are ten times more likely to be murdered than Americans. The scant resources allotted to helping natives defend themselves and their land is deeply distressing, but, with serious change to our justice system, perhaps we can all help bring justice to some of these situations.

Earlier this year, a group of protesters gathered in front of a courthouse in Hardin, Montana to challenge the mistreatment of their daughters, sisters, partners, and friends. The few dozen people stood in the cold to read aloud the names of 24 women and girls that had gone missing or been killed without help or explanation, not only to honor those who suffered, but also to force authorities and citizens to face their ignorance head-on. According to ABC, “Native Americans are 6.7% of the population of Montana, yet they make up 26% of missing person reports.” As of now, there are three task forces dedicated to finding missing native women, including the federal interagency task force that Trump signed into effect last November.

This federal acknowledgement of the plight of native women speaks to possible change that we may see in the coming years. Already, cases are being responded to differently and more urgently. When sixteen-year-old Selena Not Afraid was reported missing on New Year’s Day, the FBI jumped into action to search for the young girl. Unfortunately, Not Afraid’s body was found a few days later, but the effort that was put forth in finding her grants cautious hope for the future. Despite this progress, we must continue to fight for native women and girls and to advocate for justice when others cannot. It will not be easy to erase the stigma that has surrounded this community for centuries, but by working together with the families and loved ones of these women who have been fighting for years, there is no doubt that slowly, change can be made.