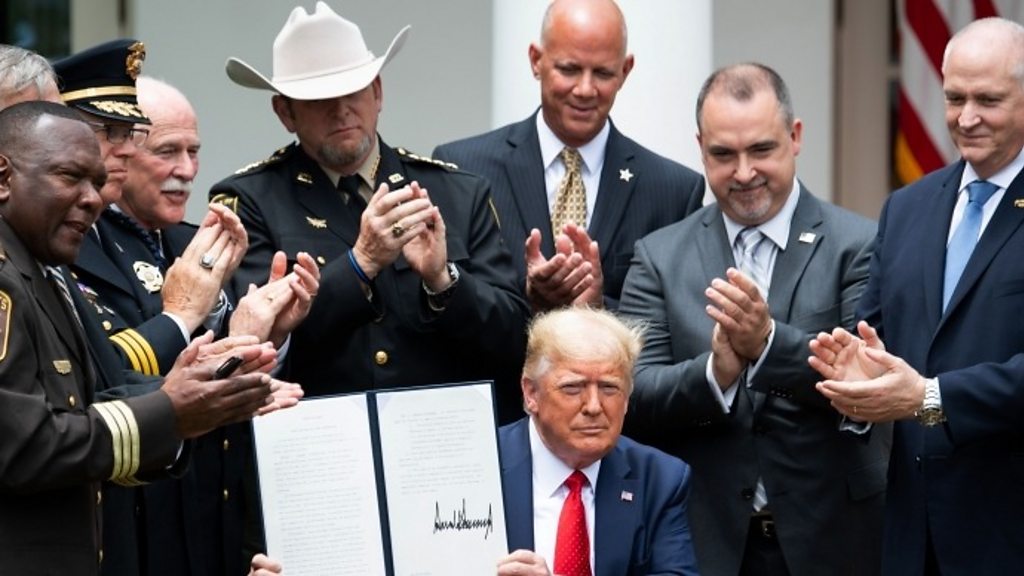 On June 16, President Donald Trump signed an executive order in an attempt to address national outrage towards police brutality- what emerged instead was a misguided band-aid solution to America’s racist and fundamentally flawed policing system.

Trump’s executive order will direct the Department of Justice to create a database that tracks police officers with cases of misconduct, officers that have been decertified, and officers that have been convicted for improper use of force while on-duty. This information sharing, however, does not include officers that resigned while under investigation for misconduct and plans to only track officers that were “afforded fair process.” Additionally, the order plans to utilize federal grants as an incentive for police departments that impose higher standards of de-escalation and use-of-force training. Trump also stated that chokeholds will be banned “except if an officer’s life is at risk.”

The Trump Administration’s most recent order is problematic and fails to truly address the longstanding issue of police brutality. Firstly, as long as there is an exception to the use of chokeholds, they will continue to be used. Analyzing historical bans on chokeholds proves that this attempt at reform is ineffective: in 1982, the Los Angeles Police Department banned the “bar-arm chokehold,” the New York Police Department banned chokeholds in 1993, and the Chicago Police Department followed in 2012. However, the past twenty years have produced multiple deaths as a result of chokeholds- Eric Garner, whose death has gained recent traction on social media, was killed after being held in a chokehold by the NYPD in 2014. The executive order offers a loophole that will contribute to officers’ violence towards people of color, particularly black people.

Additionally, allocating even more federal funds to police departments- even if intended to be used as an incentive- is not a solution to America’s issues with police brutality, nor will it address systemic racism in police departments. Money should instead be directed towards improving and uplifting the communities that are subjected to parole-style policing, which would include investments in housing and infrastructure, health services such as social work and rehab, education and schooling systems, and employment programs. This defunding of American police departments that Trump deemed as “radical and dangerous” is already the norm for the vast majority of white America- suburbs with affluent families have lower crime rates and less need for policing not because they commit fewer crimes by nature or are “less violent” than black and brown people, but because they have the ability and the institutional support to invest in their youths’ safety, health, education, and overall future. Trump completely misses the mark with his federal funds incentivization program; lack of funds and use-of-force training are not the main issues- the gentrification, redlining, systemic racism, criminalization, and overall lack of prioritization of notably black communities- is.

Following Trump’s announcement of his executive order, many noted that his speech failed to mention any form of racism as part of the issue, and instead turned to defend America’s police departments. Trump also gave a nod towards those expressing dissent over the recent dismantling of many Confederate symbols and statues- “We must build upon our heritage, not tear it down,” Trump stated, proving his tone-deafness to the messages of slavery and violence towards black people that the statues convey.

Trump also met with the families of Everett Palmer, Jemel Roberson, Darius Tarver, Botham Jean, Ahmaud Arbery, Atatiana Jefferson, Cameron Lamb, and Michael Dean, all individuals who lost their lives due to police brutality or racial profiling. Many have regarded these invitations as a photo-op for the President, who has shown in both his recent speech and throughout his time in office that it is not black lives that he is working for.

In summary, President Donald Trump’s executive order on policing is exactly what many should expect from a Commander in Chief who applauded white supremacists and continues to implement racist policies for the sake of harming people of color. As Anthony D. Romero, ACLU’s Executive Director, stated, “The president’s use of victims’ families as a backdrop as he offered empty words of sympathy, anemic reforms, and hollow rhetoric was sad — to borrow a word from the president’s vocabulary.” The reform needed starts with addressing the disparities in black communities and recognizing that race and systemic racism play a role in every aspect of society- including policing.