Black farmers have faced systematic discrimination that has dwindled their numbers and constructed barriers to their success.

Arjun Verma
and
September 12, 2021
in
Race
Courtesy of The New York Times 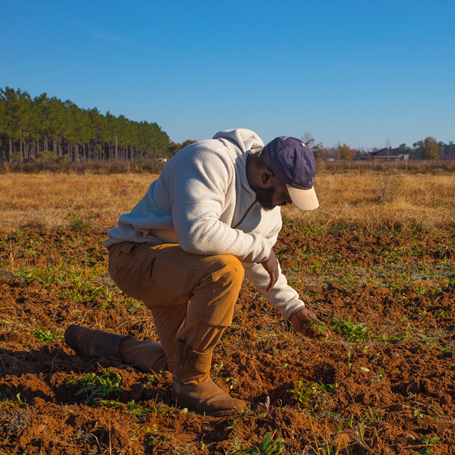 Black farmers have faced systematic discrimination that has dwindled their numbers and constructed barriers to their success. Their modern day predicament is just one part of a long line of historical racial discrimination in the farming industry.

Historically, the agricultural sector’s relationship with black farmers has been one of either enslavement or exploitation. After the abolition of slavery, many African-Americans were functionally forced to continue to work in the same abusive areas in a practice called sharecropping. These former slaves did not have the resources to search for other work and were often in debt to their landowners due to the practice and their unequal bargaining position.

Yet, even as sharecropping slowly disappeared, the discrimination continued. A prime example of this has been the negligence and active discrimination of federal bureaucratic institutions like the United States Department of Agriculture among others. Even during the era of the New Deal, African-American farmers were often left out of the negotiating table and thus not granted the same resources that their white counterparts received, if they received help at all.

The USDA also refused to give loans to black farmers, which permanently devastated their farms and livelihood. According to journalist Nadra Nittle, in spite of a Supreme Court Case in 1996, Pigford v Glickman, that was filed against the USDA on behalf of black farmers to compensate for the racial discrimination they experienced, “[w]inning the Pigford case proved bittersweet,” as the resulting settlements could not atone for the loss of “an estimated 36 million acres of farmland from 1920 to 1978 because of systemic racism.” The effects were irreparable as the discrimination’s legacy continued and black farmers continued to struggle.

As a result of these political decisions, the black agriculture industry has struggled immensely, with the number of black farmers plummeting “from nearly 1 million at the turn of the 20th century to only about 50,000 today,” according to researchers DelaRosa, Lynn, and Rivas from ABC news. In addition, they have lost hundreds of billions of dollars worth of land during that time period.

For black farmers in the United States, a job in agriculture is often emancipatory. Owning land and participating in the farming industry is often a sign of being self-sufficient. For example, according to Nittle, “possessing land enables them to be their own boss, grow their own food, and live on property they control.” Thus, the historical discrimination has not only resulted in economic woes but has also inflicted symbolic and psychological harms onto African-Americans.

Yet, the disproportionate struggles for this already marginalized community continued. The pandemic especially exacerbated the economic harms of farmers and black workers in particular. Sales stalled, prices plunged, and relief was either slow or nonexistent. Federal aid packages were reminiscent of those historically discriminatory policies in that they arrived at the hands of white farmers at an extremely disproportionate rate.

However, there is hope for the future. During the early months of the Biden-Harris administration, a COVID aid package included “an estimated $4 billion for the USDA to wipe away these farmers' debts,” according to NPR writer Emma Hurt. This would work to alleviate some of the historical problems that still linger in their legacy today. Theoretically, it should enable a fresh start for black workers without the debt that they incurred due to racially motivated policies. Once again, there still remain “rampant issues” in the way that the USDA sets the criteria for dishing out loans because they prioritize size, which of course benefits the farms who have had a historical advantage, according to Politico journalist Ximena Bustillo. It still is promising as a first step towards meaningful reform.

Even absent policy reform, black farmers have displayed remarkable resilience and determination, pursuing a career that is liberating in spite of the structural hurdles that remain. As one farmer put it according to Nittle, “No discrimination is going to stop me from putting my plow in the ground.” This level of commitment is a reminder that progress is still necessary. Today’s system does not work for black farmers, which is simply unethical considering the unfairness and inequity that pervades the systems of both the past and present.