Eviction may be a slippery slope, but the mere statistic of 11 million additional homeless Americans should be enough to spark serious reform in rental assistance and homeownership.

Roma Joglekar
and
September 12, 2021
in
Race
Courtesy of POLITICO 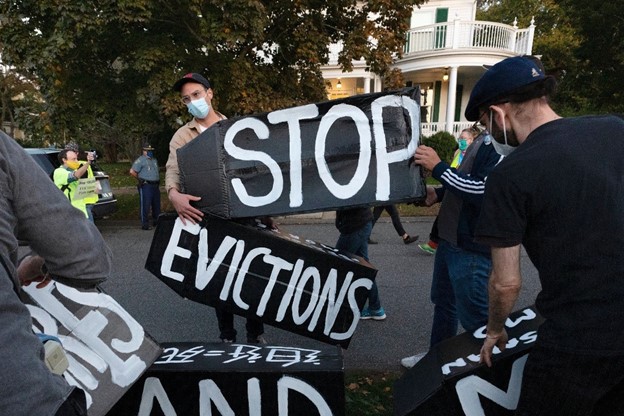 Eviction occurs when a landlord forces a tenant to leave the property they are renting, typically caused by a tenant violating their landlord’s conditions or when the tenant fails to pay rent. In September of 2020, the Centers for Disease Control and Prevention established a national ban on evictions in order to provide a sense of security for those who were unable to pay their rent during the pandemic. However, the ban did not erase the tenant's debt owed to the landlord; it simply paused evictions and allowed tenants to remain in their homes. While the economy had taken a serious hit during the pandemic, this ban was primarily installed to prevent millions of evicted Americans from spreading COVID-19 in crowded housing facilities.

After less than a year, the national ban on evictions expired on July 31st. Essentially, that means about 11 million Americans became at risk of losing their homes because of this expiration. The percentage of renters threatened by eviction remains highest in the South. There are a couple of factors that contribute to this statistic. To begin with, southern states had higher eviction rates overall before the pandemic. Additionally, the majority of southern states have yet to fully establish Medicaid expansion. This forces southern citizens to pay out-of-pocket medical expenses, which furthers their financial debt.

Minorities are also disproportionately affected by the eviction. Only 44% of Black Americans own homes, compared to 74% of white Americans. For Black Americans that can purchase their own home, data from the University of Utah and Indiana University shows that they are subjected to 13% more in property taxes than their white counterparts. These combined statistics describe why Black Americans are more viable candidates for eviction. The widening gap between Black and white Americans regarding homeownership comes down to multiple elements. Ultimately, there is a significant education gap between Black and white individuals; local governments often fail to fund schooling systems in Black communities and college tuition is difficult to pay for low-income Black families. Without proper education, it is difficult for Black Americans to acquire high-paying jobs that will fund a house. Furthermore, Black Americans face a 30% denial rate in mortgage loans compared to the overall rate of 17%. These details, combined with gentrification and increasing taxes, have created difficult housing environments for Black Americans to enter.

A leading concern with advocates and renters following the expiration of this ban is the slow distribution of Congress’s allotted 45 billion dollars in rental assistance from the COVID-19 relief bill. Only 12% of the allocated money has been distributed and spent. Many states' systems were overwhelmed by the rapid influx of assistance applications, which led to decreased acceptances. Because of this, tenants who were promised financial and housing relief are angered by this sluggish dispersal.

Another concern is the fact that the majority of Americans at risk for eviction are unvaccinated. The dominant Delta variant has created what researchers have dubbed “the pandemic of the unvaccinated.” When millions of Americans are evicted and stuffed into housing facilities, they will undoubtedly contribute to the spread and uptick of this virus.

Landlords lie on the other side of this argument, who struggle to pay their bills when tenants fail to pay their rent. Eviction may be a slippery slope, but the mere statistic of 11 million additional homeless Americans should be enough to spark serious reform in rental assistance and homeownership.