LGBTQ+ people are four times more likely to be a victim of an abusive crime. 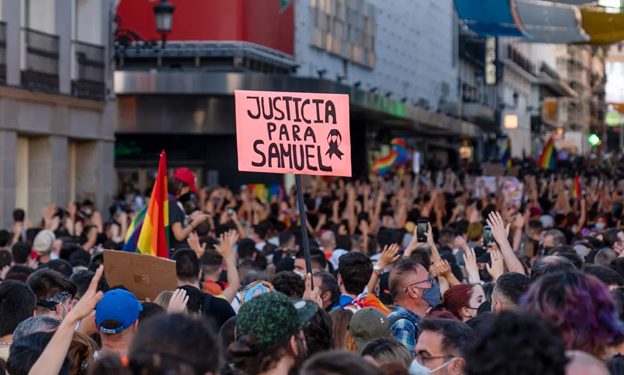 LGBTQ+ people are four times more likely to be a victim of an abusive crime.  Even in countries like Spain, which is consistently rated as one of the most accepting nations for LGBTQ+ people, in terms of Maslow’s Hierarchy of Needs, the second level of safety is not met. The murder of Samuel Luiz serves as another example of the rampant homophobia that exists in countries with progressive laws that enforce quality.

The summary of the unfortunate situation at hand is: Samuel Luiz was a 24-year-old nursing assistant at a senior home with a bright, queer future ahead of him. He was beaten to death outside of a nightclub in Riazor Beach in A Coruna, Spain. Luiz’s friend Lina told Spanish media that before the attack, the perpetrators called Samuel a homophobic slur. While it has yet to be decided if it was a hate crime, the possibility is greatly entertained. Because of this, throughout the country, in cities like Madrid, Barcelona, and A Coruna itself, protests have sprung about. At the beginning of the investigation, 20-25 people were arrested based on suspicion. Emergency personnel attempted to resuscitate him for two years, but he died. Prime minister Pedro Sanchez said on Twitter, “We will not take a step backward in rights and liberties. Spain will not tolerate it.” The Social Rights Minister, Ione Berala, stated something similar in which she said, “We want a country free of violence where everybody feels free to be who they are.”

The reaction from country leaders was to be expected. However, on a more intimate level, a common sentiment comes from a group organizing a protest, Fundación Triángulo. They say, “Terror, anguish, fear. That’s what Samuel must have felt before dying. What his friends felt when they witnessed the event and his family when they received the news. Terror, anguish, and fear are what we feel as we concentrate ourselves this afternoon in hundreds of localities in Spain to show our indignation and disgust from Samuel’s death. The death of Luiz is not unheard of for LGBTQ+ people and his name will go down as the one in millions that have died as a result of their identity.

The unjust murder of Samuel Luiz is a simple byproduct of a hetero-normative and, therefore, threatened society. Even more, acceptance is far and few between on the world stage. In a country such a Nigeria, which is a 2017 poll was rated the most homophobic with 97% of citizens stating that homosexuality should not be accepted in society, an attack such as this one would not come as a surprise but rather have overt evidence for exactly why it occurred. As repeated earlier, Spain is one of the top five most accepting nations alongside Iceland, the Netherlands, Norway, and Canada. In this case, covert unacceptance and stigma towards people who identity as LGBTQ+ is harming many who choose to ignore it. While it is completely impossible to expect monolith acceptance, Luiz moved several hundred feet towards the beach without intervention from another person to aid him. This is a wake-up call for either more security, more mobilization from Spanish citizens, or more self-defense techniques taught in schools or other educational buildings. However, tangible solutions are difficult to find when laws upholding equality are already in place. Spanish authorities are avidly attempting to solve the case and a judge is expected to rule on whether or not the motives were homophobic. But that will not bring back Samuel Luiz so his memory must be used to encourage people to protect the queer people around them.

Luiz’s murder serves as a reminder of all how queer people are not accepted and not safe, even in the places they appear to be protected. People part of the LGBTQ+ community must remain vigilant and protected, but they also must keep fighting the good fight. The eruption of protests, viral hashtags in support of Samuel, and declarations of solidarity must keep occurring to ensure that queer people and, especially, gender non-oncoming and straight-passing folks are loved and welcomed with warm arms in all areas of the world. These idealistic goals seem far in the future, but the progress made in the past decade even with injustice still occurring shows that it is possible to have a world in which safety can be almost guaranteed.

In solidarity with Samuel Luiz and his loved ones: here’s to acceptance.