The Movement Against Censorship: Why Cuban Artists Are Protesting

Over 300 people in Cuba have been protesting censorship laws since November, which was sparked when Cuban rapper and artistic freedom activist Denis Solís González was arrested on November 9

Elizabeth Jones
and
December 24, 2020
in
Justice
Courtesy of the Associated Press 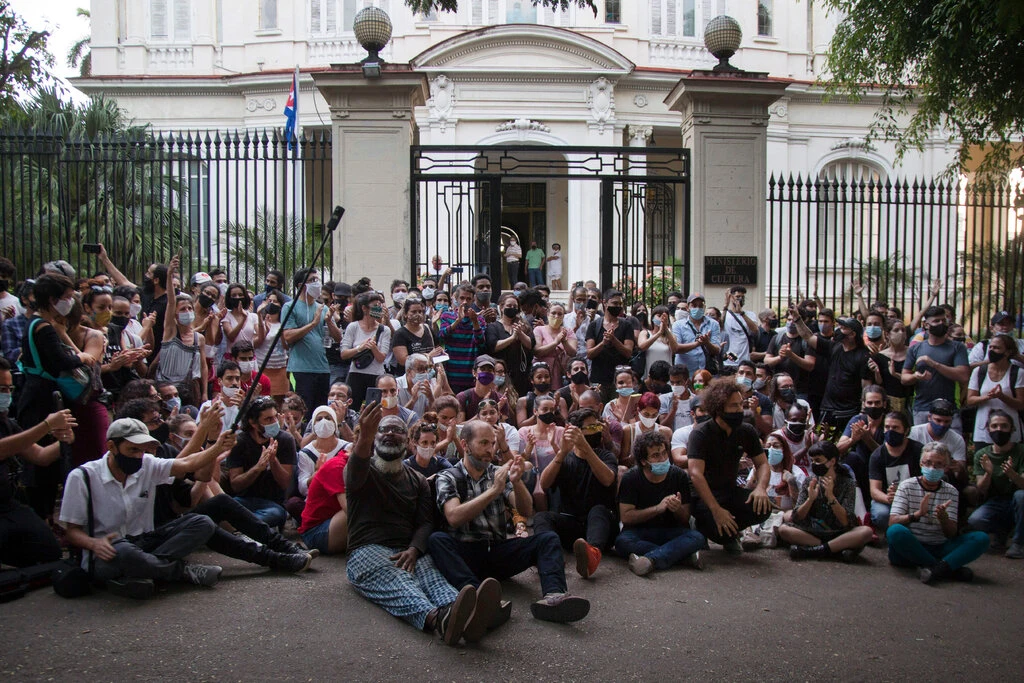 Over 300 people in Cuba have been protesting censorship laws since November, which was sparked when Cuban rapper and artistic freedom activist Denis Solís González was arrested on November 9 and live streamed the arrest on Facebook. He was arrested for posting a video of the police forcing their way into his house without a warrant three days prior. Members of the San Isidro Movement, a group of artists against Decree 349 (which was established by President Miguel Diaz-Canel to censor artists), staged a hunger strike in solidarity with González, a member of their coalition. After a week, the police broke up the strike and arrested the protestors.

Within twenty-four hours of San Isidro Movement hunger strikers being arrested, videos of their apprehensions rapidly spread across social media and hundreds of people rallied around them. A demonstration in front of the Culture Ministry in Havana, Cuba was held. People in attendance played original music, read their poetry, and sang the national anthem. This was the first major protest in Cuba since the 1990s, proving how the Internet is changing the way in which people communicate and organize. Over 60% of Cubans have access to the Internet, much to the communist government’s disdain. Information continued to spread across social media and more protests were held. They have drawn in different classes from ordinary citizens to famous people, like Cuban actor Jorge Perugorría. The director of the Americas program for the Human Rights Watch, José Miguel Vivanco, called these protests an awakening for Cuba.

Several protesters were arrested and others claim to have police vehicles staked outside their homes. This is likely to intimidate them into staying inside; however, many in this situation have shifted their activism to social media rather than in-person protests. Social media has also garnered widespread support for the cause outside of Cuba. In Miami, Florida, Cuban exiles gathered in front of the Versailles Restaurant in Little Havana to show their support for the movement. A lot of protesters have accredited WhatsApp group messages to keeping the movement alive; the Cuban government has yet to stop these messages though some Cubans reported social media sites being temporarily shut down.

On November 28, thirty protestors met with Cuban Deputy Minister Fernando Rojas for over four hours. There, they agreed to have more meetings to find solutions and revisit González’s arrest. The government speaking with those who oppose them was a historic moment, although some remain skeptical. While many were elated and hope to see real change from this meeting, others think that censorship laws will stay the same. Nonetheless, protests for the movement have yet to cease. One of the representatives for the protesters at the meeting, music promoter and activist Michel Matos, told the Reuters News Agency, “We talked about freedom of expression, freedom of association, censorship, and physical repression… I don’t think there has been a dialogue like this in a ministerial space in 60 years.”