The Life and Legacy of Gwen Ifill

Gwen Ifill, a journalist who overcame the barriers of being a black reporter in her time, unfortunately passed away of uterine cancer last November.

Srinidhi Ananth
and
December 30, 2020
in
Representation
Courtesy of WETA 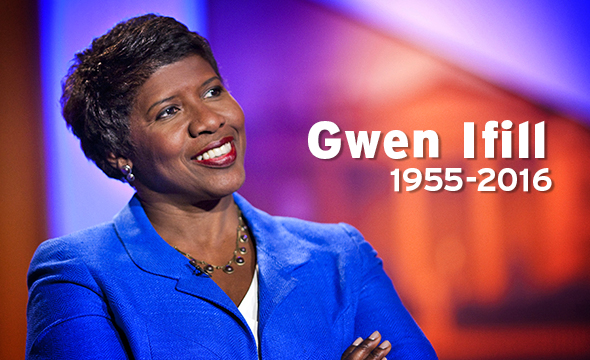 She was a distinguished journalist, political reporter, author and moderator of the public affairs program “Washington Week.” She was a co-anchor and co-managing editor, with Judy Woodruff, of PBS NewsHour, and a political analyst for the 2004 and 2008 vice-presidential debates. She might have been all this, but more importantly, she was a role model to me. This woman is none other than Gwen Ifill, a journalist who overcame the barriers of being a black reporter in her time, and who unfortunately passed away of uterine cancer, last November.

Ifill was a woman of significance in journalism not only because of her talent, courage, and commitment to the field, but because she broke new ground. For me, being a writer and photography editor for my school’s newspaper, The Knightly News, I’m constantly looking for inspiration for my writing, and ways to emulate notable figures who have done similar things in their time.

Ifill’s childhood was not very smooth-sailing, but I commend her immensely for the fact that she rose up above all the hardships that she encountered, and not only making it big in her profession of reporting and broadcast journalism, but pioneering being the first significant African American reporter and broadcast journalist to ever exist.

Even as a child, Ifill was curious and inquisitive.  The daughter of Caribbean immigrants, she grew up during the tumultuous 60s, and she was raised in many different cities along the East Coast, sometimes residing in church houses, or federally subsidized housing.  Ifill made it big when she joined the staff of The New York Times in 1991, becoming a White House correspondent.  She covered Bill Clinton’s presidential campaign in 1992, and journalist Tim Russert consequently promoted her to cover Capitol Hill for his channel, NBC.

Ifill had no tolerance for discriminatory individuals.  When studying at Simmons College, Ifill interned at the Boston-Herald American Newspaper.  She came back to a note on her desk that addressed her by a racist epithet, and said, “go home” and immediately showed the note to the editors, who offered her a permanent job for the newspaper.  “She didn’t get the job out of sympathy,” Ifill’s close friend Michele Norris said. “She got the job because she didn’t let that slow her down” (The New York Times).

Ifill was and always will be an immense influence on women all around the world. In today’s world, I would like to say that we have improved exceptionally with racial equality and intolerance for bigotry, but we still have lots of improvement to make, some examples being African American discrimination, and Xenophobia. The world hasn’t come to terms with the fact that America is bound to be a racially diverse country, no matter what rules and regulations Trump has in store. Iffil spearheaded, through her admirable work as a journalist, the idea that America thrives not in spite of its infinite diversity, but because of it. The concept that women can excel in any career path they desire was championed by Iffil, and every woman should be grateful for her bold and upholding personality.

Why the New York Subway Brings Out the Worst in People