Led by the Indian farmers, India is currently witnessing the largest protest in human history

Snayini Das
and
December 26, 2020
in
World
Courtesy of The Guardian 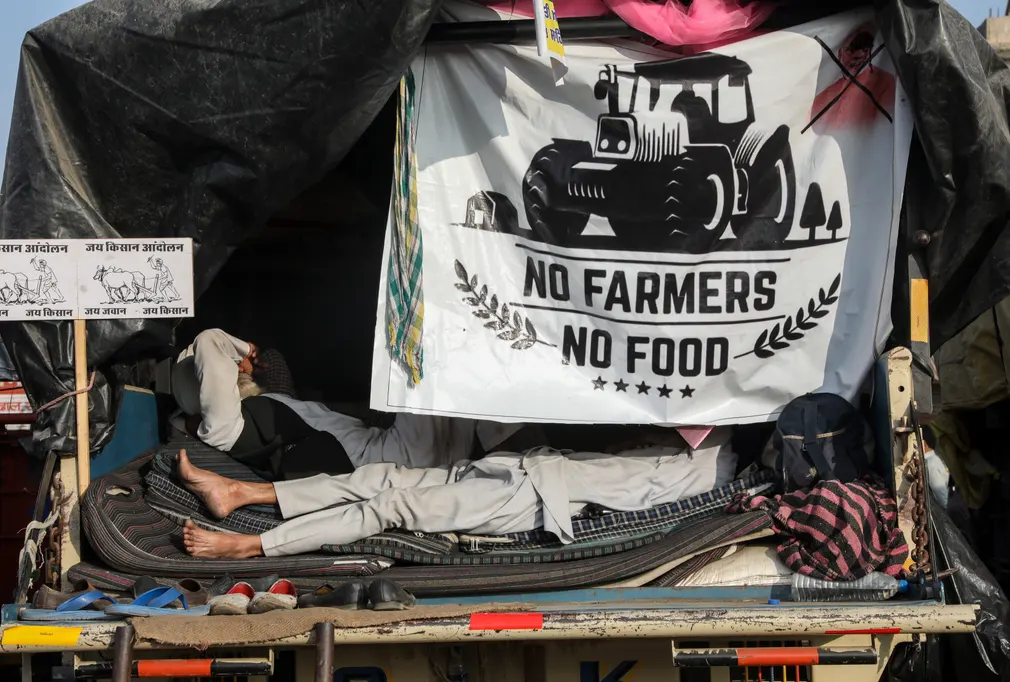 According to the government, this act will expand the scope of trade areas of farmers’ produce from only a few selective areas to “any place of production, collection, aggregation”. It is also expected to get the farmers involved in e-commerce, electronic trading, and prohibit the state governments from levying any market fee, cess, or levy on farmers, traders, and electronic trading platforms for trade of farmers' produce conducted in an 'outside trade area'.

The Government hopes to define a dispute resolution mechanism with the help of this act, providing a legal framework for farmers to enter into pre-arranged contracts with buyers.

This Act excludes pulses, cereals, potato, onions (which are the daily consumption items in most of the Indian households), edible oilseeds, and oils from the list of essential commodities. The Act also states that the stock limit on agricultural produce will be imposed, based on price rise.

The model farming acts were released by the Central Government back in 2017, following which the Standing Committee on Agriculture (2018-19) noted that a number of the reforms suggested in the model acts had not been implemented by the states. To solve the issue of implementation, a committee of seven Chief Ministers was set up in July 2019 and ultimately, the Central Government publicized the three agricultural laws in the first week of June, 2020.

According to the Hindu Nationalist Prime Minister of India, Narendra Modi, this series of agricultural laws is “a watershed moment in the history of Indian agriculture”. He also ‘congratulated’ all the hardworking farmers on the passage of key bills in Parliament; whereas, in actuality, the bills are in the interest of mega-corporations. Opening the market to mass privation with no limitation on the amount of companies stockholding goods and the deregulation of pricing for goods will lead to lowering of items’ prices by corporations in such a way that no local farmers will be able to reasonably compete with them. Outcry against the bills started in August of 2020 at the very local level when farmer unions began holding local protests mostly in Punjab. Following that, the farmers from Punjab, Rajasthan, Haryana, and many other states have united for nationwide protests against the agricultural reforms. The farmers started the ‘Dilli Chalo’ protest rally on November 25, 2020 when thousands of farmers peacefully marched to the borders of Delhi and were met by police with water cannons and tear gas. Besides, the “Rail Roko” campaign has been going on since September 24, 2020, which has led to suspension of railway services in Punjab for over two months.

So, what are the demands of the farmers? As of December 3, 2020, the six demands include the following:

As an outburst of rage due to the insulting proposals, the farmers decided to intensify the protest by boycotting all Reliance Jio (an Indian telecommunications company) products, petrol pumps, and shops. Since the ‘peaceful’ Bharat Bandh- a nationwide shutdown on December 8 - did not prove to be effective, the farmers decided to block the Jaipur-Delhi and Delhi-Agra Highways on December 12. Despite all these, Prime Minister Narendra Modi again stated that his government was committed to farmers’ welfare and that the legislations were aimed at giving them alternate markets to boost income. At the annual meeting of industry body FICCI (Federation of Indian Chambers of Commerce & Industry), he also said, “Reforms will help draw investment in the agriculture sector and benefit farmers. The aim of all government reforms is to make farmers prosperous.” Moreover, even more outrageously, Karnataka Agriculture Minister B. C. Patil said, “Farmers who commit suicide are cowards. Only a coward who can’t take care of his wife and children commits suicide. When we have fallen (in the water), we have to swim and win.” This clearly shows how the subject of mental health is considered vague and unimportant in India, let alone its intersections with the socio-economic status.

According to the data of several surveys, nearly 140,000 registered farmer suicides have occurred over the past five years, and even more may have gone unregistered. Many of their suicide notes directly state the reason to be rising debt levels and low income. The data of National Crime Records Bureau (NCRB) reveals that 42,563 farmers and daily wagers died by suicide in 2019 itself, and that the suicide numbers seem to be rising annually. So what is actually on rise: the cowardice among farmers, as stated by B. C. Patil, or the blunders of India’s government?

Amidst the ongoing protest, Baba Ram Singh, a sant (saint) from a Gurudwara in Haryana, died by suicide on 16th December. He shot himself at the Farmers’ Protest Site in Kundli, Haryana, leaving a suicide note in which he blamed “the government’s injustice” that led him to “sacrifice” his life. The note read – “To inflict injustice is a sin, but it is also a sin to tolerate injustice. To support farmers, some have returned their awards to the government. I have decided to sacrifice myself.” Mental health issues are also coming up as an outcome of the resistance to the government’s fascism. At least 22 protestors had died as of December 17; while some were killed in road accidents and police attacks, majority died due to ailments and severe cold weather.

The protest has crossed international borders. Supporters of the Indian farmers have come out to protest in Australia, Canada, New Zealand, Pakistan, United Kingdom, and the United States. Canadian Prime Minister Justin Trudeau stated that “Canada will always be there to defend the right of peaceful protestors" and expressed support for "the process of dialogue."

However, the US mainstream media has been wholly ignoring the whole issue. Additionally, the Indian media and patriarchal society has ignored the participation of women farmers and protestors while 20,000 to 25,000 women have been part of the farmers’ protest since November 27. It is also notable to point out how Dalit farmers issues are not being talked about during the protest by any Upper Caste farmer unions. When the farmers took help of roti-makers and pizza langars to help themselves with food during the protests, a section of social media trolled the ‘lavish’ aid being provided to the farmers and protestors. If no one cared when the farmers died consuming poisons and held dead rats during 2018’s Kerala protest, then why are they bothered if the farmers are having pizzas and ghee-smeared rotis?

The scenario of farmers’ protest has seen quite an involvement of Indian celebrities; while celebrities such as Lily Singh, Diljit Dosanjh, Priyanka Chopra-Jonas, Preity Zinta, Riteish Deshmukh, Sonam Kapoor, Harbhajan Singh, Sonu Sood spoke out in support of the Indian farmers and protestors, many others such as Daler Mehndi and Kangana Ranaut backed the laws asking supporters to “trust PM Modi”.

Military veterans have decided to return over 25, 000 gallantries and service medals to the President of India as a sign of protest against the Farmers’ Bills. Additionally, Punjab agriculturalist Dr. Varinder Pal Singh refused to accept the National Award from the Central Government in solidarity with the farmer protests. He said, “My conscience does not allow me to receive this award when our farmers are on the road” and also raised the slogan “we support farmers” on stage.

The Section 13 of the Farmers’ Produce Trade and Commerce (Promotion and Facilitation) Act, 2020 states:

Hence, it is very much clear that the exclusion of prosecution of civil servants for carrying out legal duties, as stated in this act, goes way higher than other laws. It is not just the farmers who cannot sue, but nobody else can. This legislation will therefore affect every single Indian.

As of international level, the Bills will also affect consumption of several countries as India stands to be the largest producer and exporter of spices – so “No Farmers also means No Turmeric for your Latte’s.”

1.   Convene a special Parliament session to repeal the farm laws

5.   Cut diesel prices for agricultural use by 50%

6.   Repeal of Commission on Air Quality Management in NCR and the adjoining Ordinance 2020 and removal of punishment and fine for stubble burning

7.   Release of farmers arrested for burning paddy stubble in Punjab

9.   Centre should not interfere in state subjects, decentralization in practice

10. Withdrawal of all cases against and release of farmer leaders

With the stalemate continuing between the Centre and the protesting farmers, Prime Minister Narendra Modi stated, “There has been a big plot to confuse the farmers. There is an attempt to scare them, that after the new farm bills, someone will occupy their land.”

Which is the real big confusing plot - the one stated by the Prime Minister or the one in which he is actually trying to trap the farmers?

Why do the farmers who work so hard for our three daily meals have to fight to have even one in a day?