While the murders of George Floyd and many other Black Americans sparked protests and movements nationwide, the murder of Mr. Myeni did not make it onto national television or even cause an outcry among residents of the state

Isha Umamageswaran
and
July 3, 2021
in
Black Lives Matter
Courtesy of the AP 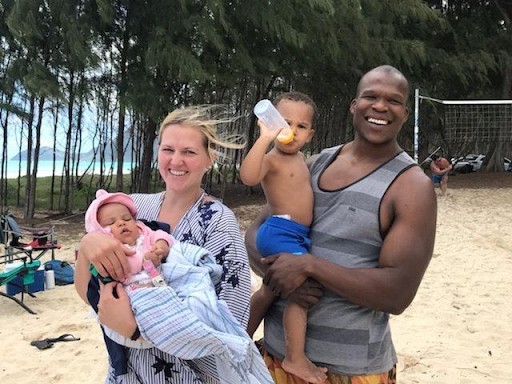 When Lindani and Lindsay Myeni moved to Honolulu, Hawai’i, they expected the city to be much more inclusive than anywhere they had previously lived in the continental U.S.: free of the racist notions that their family could potentially be the target of. Yet, Lindani was shot dead by the Honolulu police only three months after they had arrived at the island— an act that many say was fueled by the same anti-Black prejudice that plagues the rest of America and the world. While the murders of George Floyd and many other Black Americans sparked protests and movements nationwide, the murder of Mr. Myeni did not make it onto national television or even cause an outcry among residents of the state. What does this say about the presence of false narratives and disregard for police brutality in Hawai’i?

In February of 2021, the Myenis decided to move to Hawai’i to pursue a better life for their family. Because of its notable ethnic and racial diversity, they assumed that a life there would mean less random police stops and arrests for Lindani, and a safer home for their two children. Having first lived in Tampa, Florida, and then Denver, Colorado, Lindsay recalled thinking nothing would ever happen to the two in Hawai’i. That changed on April 14th, the night of the fatal shooting. According to Lindsay, Lindani had seemed restless the entire day, even claiming to require spiritual protection. Later that night, reports say that Lindani entered a random house and sat down; many of his family members believe that he mistook the house for a temple nearby. At the same time, a frightened woman inside the house called 911. The police arrived at the house five minutes later, and though Lindani was unarmed, several shots were heard on the telephone soon after. This sequence of events is far too familiar: before the victims even get a chance to speak for themselves, they are murdered senselessly.

Soon after Lindani’s death, Lindsay and her two children returned to South Africa for a better life. Upon the Myenis’ arrival in South Africa after Lindani’s death, several members of the African National Congress Youth League silently protested in the name of Black Lives Matter, showing their support with a giant banner with Lindani’s face on it. In fact, many civilians have banded together to demand justice and more national recognition for Lindani in the United States. Even local officials raised funds to support Myeni’s funeral which was held on May 8th, 2021. One reason many South Africans are stung by this event is because of how common it now is for darker skinned individuals to emigrate from Africa to the United States only to end up dead. Regardless, another question remains: why isn’t Lindani’s murder even receiving media coverage or being protested in the area where it happened?

There are several reasons why Hawaiians might not be as angry as others expect them to be. For one, Kenneth Lawson, a professor at the University of Hawaii, believes that there is information being withheld from the public around this killing, and that the Hawaiian police are attempting to establish a false narrative of the event in order to prevent backlash. The facts presented by the police may be biased or incorrect, which is why citizens are not so angry; because they’re being fed false facts about the supposed innocence of the police, they are much more sympathetic than they would otherwise be towards these aggressors who consequently appear to residents as simply doing their job. Also important to consider is the people’s desire to avoid coming to terms with the racial biases Hawai’i does in fact have, ruining the ‘perfect paradise’ image it projects to many Americans. Sadly, even the Myenis moved to Hawai’i as a consequence of this image. Many also say that because of Hawai’i’s disconnect from the mainland, many continental Americans are further unaware of events on the islands.

Recently, footage from the night of the murder has been acquired through the law group representing the Myenis. This footage provides a stark contrast to what the police originally claimed to have happened that day, completely changing the narrative around who is at fault. In the footage, the police did not even identify themselves before attacking Myeni. Furthermore, he left the house before the police arrived, even returning to his car. These events are drastically different from what the police insisted was the true story: Lindani having fought back and having refused to leave. Clearly, the false narratives pushed by the police have altered the story to great extents and can affect who sympathizes with Lindani and who backs the side of the police.

Going forward, it’s important to ensure that all point-of-views of any events are sought out and researched and that any one side’s rendering of a story may not be entirely accurate. As of now, Lindsay Myeni doesn’t believe she will return to Hawai’i or any other part of the U.S. anytime soon. Now that more information regarding that fateful night has been released, she and many other South Africans are stepping up to demand acknowledgment and awareness from the police and people of Hawai’i.