The Importance of High School Journalism

Morgan Weir
and
September 24, 2019
in
High School
Courtesy of MediaShift 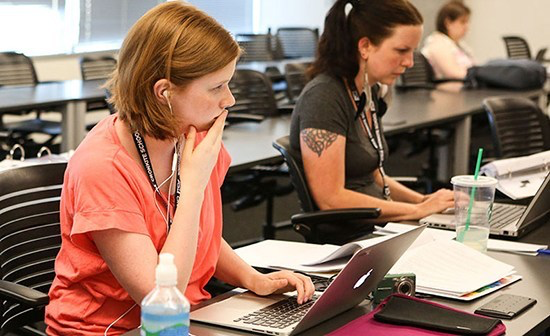 In recent years, student journalism has become increasingly critical. Oftentimes, students are the first reporting on a scene for major events, the ones asking the most difficult questions at press meetings, and the biggest influence when it comes to technological innovation. There’s no better example of this type of revolutionary coverage than the modern-day high school newspaper.

As a journalist for the highly-accomplished Millard West High School staff, I see the commitment and passion of my fellow reporters daily. In between stressing over extracurriculars and trying to keep up with other classes, we spend our time chasing potential stories and acting as the voice of the student body.

Along with a printed newspaper, Millard West has a student news site called The Catalyst with stories, photos, podcasts, live streams, broadcasts, and other content being published constantly. The weekly broadcast, known as MWHS Wildcat News, was one of the first of its kind in Nebraska and includes everything from sports updates to breaking news stories.

Millard West has won state journalism two times and has been runner up 3 times. The school has won numerous local and national titles, including Best in Show for newspaper, Excellence in Broadcasting from the University of Nebraska at Omaha, the Gold Crown award from Columbia Scholastic Press, and the All American award from National Scholastic Press. The school was also a Pacemaker Award finalist last year.

The many awards are a result of the staff’s out-of-the-box reporting which has become characteristic of modern day high school journalism. Millard West’s newspaper staff uses technology and modern innovations to get more coverage and increase outreach. We livestream sports events for the entire community, use podcasts to inform and entertain, and engage people on our website with interactive polls.

Another reflection of the school’s creativity is our diverse coverage. Because of the mix of interests, identities and lifestyles on our staff, we are able to cover a wide range of stories. We’ve done stories on artists and musicians, opinion pieces on recycling and news reports on local funding for public education. We strive to put truth in front of comfort when it comes to reporting, which means we often cover sensitive topics like gun violence, sexual assault, and the climate crisis. Some of the most unique (and popular) stories on our site are the feature stories, which allow us to showcase the most remarkable and unusual parts of students’ lives. Millard West’s staff reporters strongly believe everyone has a story to tell and it is our job as journalists to tell it.

It is also our responsibility to consistently defy stereotypes by telling the truth and being unbiased. We are able to challenge peoples’ perspectives by covering different things than the school typically hears about from mainstream news or school gossip, and we broaden the community’s understanding on certain topics and events. It is especially important for us individually to be aware of what lens we are viewing certain stories through and to be checking ourselves and our privilege consistently. As students who go to a well-funded school and report on stories in a mostly wealthy, white community, we need to question our assumptions to guarantee truthful reporting that encompasses a broader perspective.

Ultimately, high school journalism is about far more than taking pictures at sports games or interviewing people who went viral on Tik Tok. It is a powerful tool in creating active and socially aware communities. It is a way for us to keep the history and special moments of our school alive, redefine the way students view the world, and teach kids how to use their voices to spread truth. Most importantly, it is the weapon with which we fight disunity, ignorance and apathy in our schools.