The Government is Trying to Erase an Entire Community of People

It was recently announced that the Trump administration was looking to redefine sex. 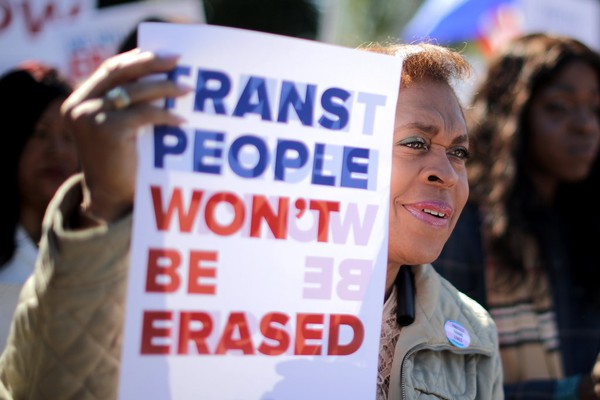 It was recently announced that the Trump administration was looking to redefine sex.  Specifically, the definition of sex under Title IX, which bans gender-based discrimination in education.  The new definition would be solely based on an individual’s genitalia at birth, ignoring their preference completely.  And according to the New York Times, “Any dispute about one’s sex would have to be clarified using genetic testing.”

Because the only options here are male and female, this decision, if given the go-ahead, would ensure that about 1.4 million Americans won’t be recognized by the government.  These people are the transgender and/or gender non-conforming people living in America, and this is not the first time this administration has attacked them. Since 2017, it has destroyed Obama-era protections and policies that kept trans people safe, and even threatened to bar them from serving in the military.

Upon the release of this news, the transgender community and their allies took to various social media sites, posting the hashtag #WontBeErased with their selfies or their thoughts.  According to Sarah Warbelow, the legal director of the Human Rights Campaign, the administration has always “opted to turn their back on transgender people” whenever they are faced with decisions like this.  This pattern has been seen for far too long, and a change must be enacted to break the cycle. It must be ensured that no one is erased from federal recognition for who they are.

Moreover, it is important to note that the government’s decision may not be yours. Just because the current administration refuses to accept you or someone you know doesn’t mean you need to follow suit; on the contrary, it is now, more than ever, essential to stand up and show the world that being this way is not an issue. That it is not something to hide. That the government cannot define anyone out of existence.

This decision may not affect you directly, but it could affect someone you know.  If you notice that they are concerned, let them know that you are here for them no matter what happens regarding this issue.  In a country in which the government refuses to acknowledge an entire community, your understanding may mean the world to them.